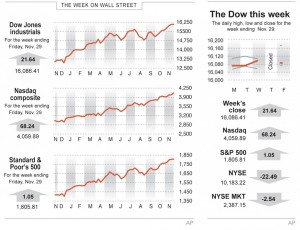 The stock market fizzled Friday at the end of a holiday-shortened trading day, but still logged its longest streak of weekly gains in a decade.

Investors watched for early trends in year-end sales as the busiest shopping day of the year, Black Friday, got underway. Retailers were one of two industry groups in the S&P 500 to rise.

Stocks overall have surged this year as the economy maintains a slow but steady recovery and corporations keep earnings growing. Demand for stocks also has been bolstered by Federal Reserve policies that have held down interest rates, making bonds less attractive investments than stocks.

Stocks rose for most of the day Friday, but petered out in the last half hour of trading. The New York Stock Exchange and the Nasdaq closed early, at 1 p.m. Eastern Time, and activity was lower than average a day after Thanksgiving. Thin trading can lead to sudden swings in markets.

And even though the S&P 500 eased Friday, it still rose for an eighth straight week, its longest stretch of weekly advances in a decade.

The broad stock index saw two of its 10 industry groups rise. One of them was consumer discretionary companies as investors hoped for improved year-end sales.

Over a dozen major chains opened on Thanksgiving Day and planned to keep their doors open through Friday, the traditional start to the year-end shopping season. Crowds formed early and often throughout the two days.

Investors will be following sales trends closely to get a read on the health of retailers, as well as the wider economy. Consumer spending is a critical component of the U.S. economy.

Retail sales are expected to rise 4 percent to $602 billion during the last two months of the year, according to the National Retail Federation. That’s higher than last year’s 3.5 percent growth, but lower than the 6 percent pace from before the recession.

But sales could come at the expense of profits, analysts expect, as retailers are likely to use more discounting to draw in customers.

The S&P 500 index has surged 26.6 percent this year, propelling it to a string of record highs. If its gain holds, it would be the strongest year for the index since 1998, when it rose 26.7 percent.

November is typically a strong month for the stock market, and this year was no exception. The S&P 500 ended the month with a gain of 2.8 percent, the ninth month this year that the index has advanced.

Returns for the month rank as the third best for the Dow and the S&P 500, according to the Stock Trader’s Almanac, which has analyzed data going back to 1950.

An unexpectedly robust jobs report gave stocks a lift at the start of the month, and strong corporate earnings reports for the third quarter helped maintain the momentum.

Almost all of the companies in the S&P 500 have reported their third-quarter earnings. Profits are forecast to increase by 5.7 percent compared with the same period a year ago, according to data from S&P Capital IQ. Earnings growth is also better than then 4.9 percent achieved in the second-quarter.

“November is a time when investors evaluate earnings reports, and if share prices are the yardstick that you’re looking at, then investors liked what they saw,” said Lawrence Creatura, a portfolio manager at Federated Investors.

In government bond trading, the yield on the 10-year Treasury note rose to 2.75 percent from 2.73 percent on Wednesday.

This article appeared in print on page 8 of the December 2nd, 2013 edition of Hamodia.