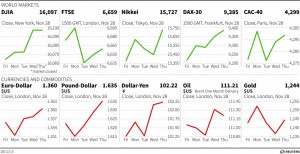 Japan’s stock index was the standout performer Thursday, surging to its highest level in almost six years as the yen fell amid speculation that the country’s monetary policy will be eased further.

On a day when trading levels are low because of Thanksgiving in the U.S., the Nikkei 225 helped shore up markets around the world as it advanced 1.8 percent to 15,727.12, its highest close since late 2007.

The benchmark’s surge has been driven by the Japanese currency’s slump to its lowest in half a year. The dollar strengthened to a high of 102.38 yen as traders bet on more monetary easing from the central bank as it tries to revive the world’s third-biggest economy.

Japan’s powerhouse exporters are potentially the biggest beneficiaries of the yen’s weakness as buyers may find it cheaper to purchase cars and electronics made by export manufacturers such as Toyota and Sony.

“The Nikkei remains the world beater this year, up more than 51 percent in 2013,” said Robert Kavcic, an analyst at BMO Capital Markets.

A survey from the European Commission, showing economic sentiment in the 17-country eurozone at a 27-month high in November, had little impact either in stock markets or in the currency markets, where the euro was trading 0.1 percent higher at $1.3600.

Potentially more interesting will be Friday’s official inflation figures. Another fall from October’s 0.7-percent rate could stoke speculation of further monetary easing from the European Central Bank, weighing on the euro.

The Philippines PSE Composite index soared nearly 2 percent after the government reported that the economy grew 7 percent in the third quarter. However, Hong Kong’s Hang Seng slid in the final hour of trading to close 0.1 percent lower at 23,789.09.

Elsewhere, the benchmark New York contract for crude oil was down 15 cents at $92.15 a barrel. Oil prices have drifted lower in recent weeks as geopolitical concerns about Syria have subsided and following an international agreement this week over Iran’s nuclear plans.

This article appeared in print on page 8 of the November 29th, 2013 edition of Hamodia.