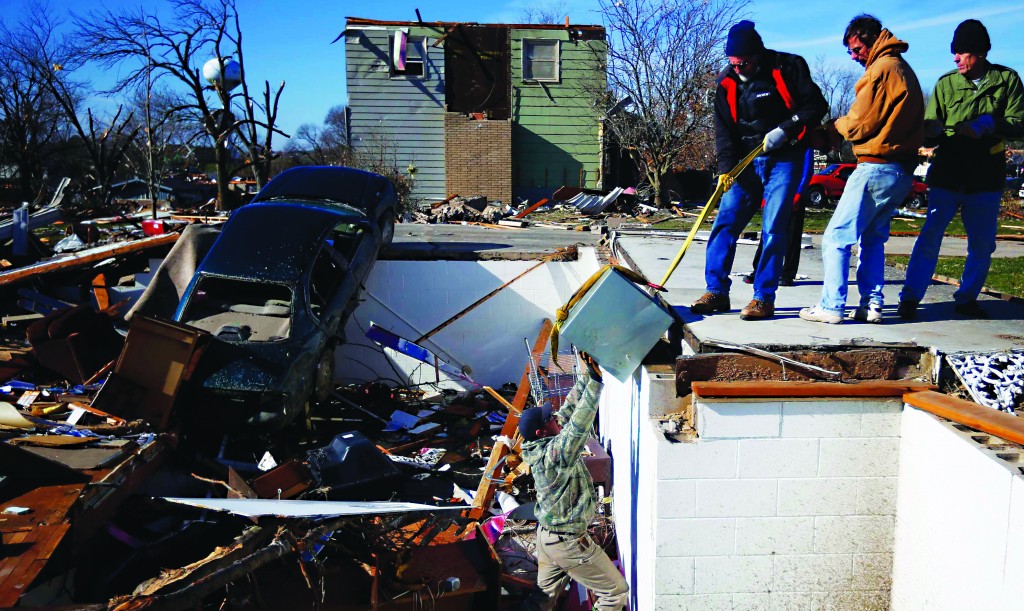 Aaron Montgomery’s house was not damaged by the tornado that roared through this central Illinois community. But when the twister knocked out power across town, he had to find a way to keep his 5-year-old daughter alive.

The recipient of a heart transplant last year, Isabel Montgomery requires machinery to help her breathe and eat. So her father furiously made calls looking for help, finally getting through to a construction company that loaned two generators.

“I babysat the generators with a gas can last night to make sure they were full and running,” he said Monday.

The cleanup from Sunday’s outbreak of tornadoes had scarcely begun, but people in storm-ravaged towns like Washington, 140 miles southwest of Chicago, had to keep moving.

The tornado cut a path about an eighth of a mile wide from one side of Washington to the other and damaged or destroyed as many as 500 homes.

It could be days before power is restored in the town of 16,000, state officials said Monday, and debris was still scattered across the streets. But people forced out of their homes were allowed back in Monday to survey damage and see what they could save.

In one neighborhood, homeowners and their friends and families worked quickly in a stiff, cold breeze. Some homes had been shattered into piles of brick, drywall and lumber. Others, like Jessica Bochart’s house, still had sections standing.

“All of this can be replaced,” she said, gesturing at the collapsed remnants of her ceiling. But inside the home she shares with her husband, son and daughter, she was relieved to find some irreplaceable things intact — photos, family heirlooms and the Bochart’s cat, Patches.

“He was sitting under our dining table, looking like, ‘What happened?’” Bochart said as she weighed the next set of decisions. Among them: Where will the family live for now? Offers from friends and family had poured in, and they were in a hotel for the moment, but she hesitated with the decision.

“I don’t know,” she said after a long moment’s thought.

Though the powerful line of thunderstorms and tornadoes howled across 12 states Sunday, flattening neighborhoods in minutes, the death toll stood at just eight.

In the last decade alone, forecasters have doubled the number of days in advance that weather experts can anticipate major storms, said Bill Bunting of the National Weather Service.

Despite Sunday’s destruction and at least eight deaths, 2013 has been a relatively mild year for twisters in the U.S., with the number of twisters running at or near record lows.