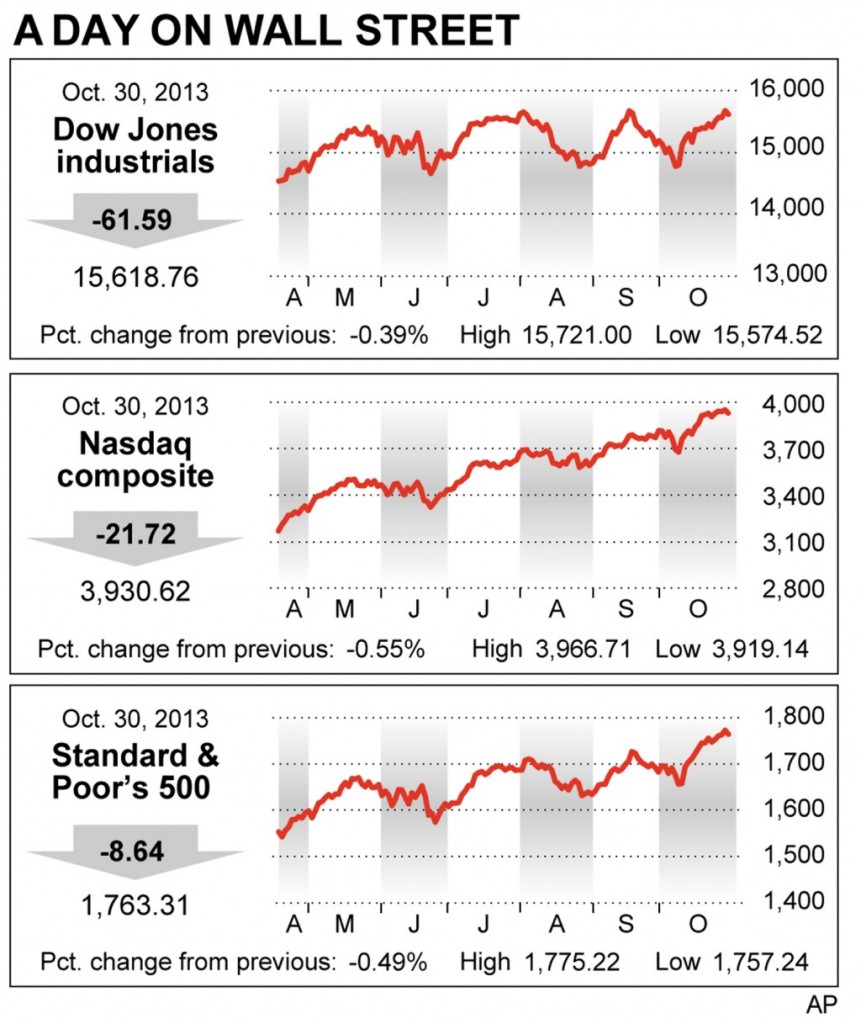 The stock market retreated from all-time highs Wednesday after the Federal Reserve said the U.S. economy still needed help from its stimulus program.

In its latest policy statement, the nation’s central bank said it will continue buying $85 billion in bonds every month and keep its benchmark short-term interest rate near zero. The bond purchases are designed to keep borrowing costs low to encourage hiring and investment.

The Fed said it would “await more evidence” that the economy was improving before starting to pull back its stimulus program.

The Fed’s announcement was mostly expected by investors. Since the Fed’s last meeting in September, the economy suffered a blow because of the 16-day partial shutdown of the U.S. government and the near-breach of the nation’s borrowing limit.

As a result, investors thought it would be highly unlikely the Fed would make any changes to its stimulus program until there was more evidence that the U.S. could grow without the central bank’s help.

The soonest the Fed could revisit its bond-buying program will be at its mid-December meeting. However, Ben Bernanke’s term as Fed chairman ends in February and his successor, Janet Yellen, has yet to be confirmed by the Senate. It is seen as unlikely Bernanke would take on such a large project like pulling back on the bond-buying program when he only has months left in the position.

“We’re looking at March of next year at the earliest” before the Fed will start to pull back, said Dean Junkans, chief investment officer for Wells Fargo Private Bank.

Bond prices also fell after the Fed’s announcement. The yield on the benchmark U.S. 10-year Treasury note rose to 2.54 percent from 2.50 percent the day before.

Stocks of home construction companies fell after the Fed said in its policy statement that “the recovery in the housing sector slowed somewhat in recent months.” Last month, the Fed said housing “has been strengthening.”

Despite the decline Wednesday, October has been a big month for the stock market. With just two days of trading left, the S&P 500 is up 4.9 percent, putting the index on track for its best month since July.

Investors also had another dose of quarterly earnings to work through.

General Motors rose $1.17, or 3 percent, to $37.23. After taking out one-time effects, the nation’s largest automaker earned $1.7 billion, or 96 cents per share, beat analysts’ expectations of 94 cents per share.

Western Union plunged $2.39, or 12 percent, to $16.85. The money transfer company said late Wednesday that it may not see any profit growth in 2014 due to increasing regulation and compliance costs.

Facebook soared in after-hours trading after the company reported higher income than analysts were expecting. Facebook rose $5.87, or 12 percent, to $54.88. The social media network said it earned an adjusted profit of 25 cents per share for the third quarter, six cents better than what analysts were expecting. Revenue jumped 60 percent to $2.02 billion.