National Social Security Benefits to Go Up by 1.5 Percent
National 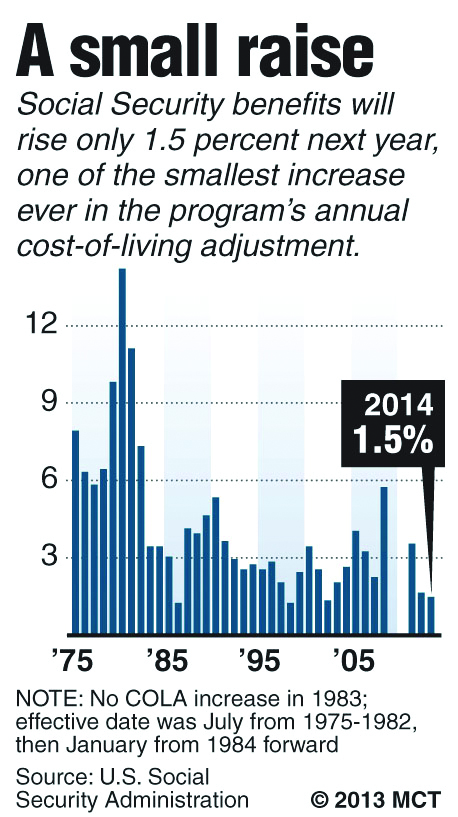 Social Security benefits will rise 1.5 percent in January, giving millions of retired and disabled workers an average raise of $19 a month to keep up with the cost of living.

The increase is among the smallest since automatic adjustments were adopted in 1975, and reflects the fact that consumer prices haven’t gone up much in the past year. The annual cost-of-living adjustment, or COLA, is based on a government measure of inflation that was released Wednesday.

Automatic COLAs were adopted in 1975 so that benefits for people on fixed incomes would keep pace with rising prices. Some advocates for older Americans, however, complain that the COLA sometimes falls short, especially for people with high medical costs.

Michael Hartzog of Charleston, S.C., said the small COLA will make it difficult to keep up with his wife’s medical bills.

“We’ll probably need to reduce our spending even more,” Hartzog said. “I don’t know exactly how.”

Hartzog, 63, is retired after working 38 years at the Social Security Administration in South Carolina. He said his federal pension and Social Security benefits are affected by the COLA.

The COLA affects benefits for more than one-fifth of the country: nearly 58 million Social Security recipients, as well as benefits for millions of disabled veterans, federal retirees and people who get Supplemental Security Income, the disability program for the poor.

Benefits are based on lifetime earnings. The more you make, the higher your benefit — to a point. For someone who retired this year at age 66, the maximum monthly benefit is $2,533. That person will get a raise of about $38 a month.