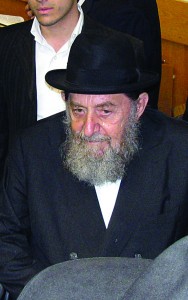 This past Friday, Klal Yisrael lost one of the eminent philanthropists and supporters of Torah in our generation, Mr. Moshe Reichman of Toronto, Canada. He was 83.

Reb Moshe was born in 5690/1930 in Vienna, Austria, to Reb Shmayah and Rivka, nee Gestetner. His mother was descended from the Panim Meiros, zy”a.

During World War II the family fled to Paris, and from there to Tangiers, Morocco, where they lived for 15 years. Reb Shmaya established Torah institutions there. Young Moshe learned first in Tangiers and then in Toras Emes in England, under Harav Schneider.

In those days the yeshivah suffered from great poverty, and there wasn’t enough basic food for the students. The Rosh Yeshivah spoke to one of the bakeries in the area that provided kosher bread to the Jewish population and asked them to give any leftovers to the yeshivah to still the hunger of the bachurim. The baker agreed, and said that if someone would come early every morning, he would receive all the remnants for the yeshivah.

The Rosh Yeshivah asked Moshe Reichmann to be the one to go get the bread every day, a task that he fulfilled with great devotion. Because he didn’t have a car, he walked a great distance each day to the outskirts of London to obtain the bread.

One day, the Rosh Yeshivah summoned Moshe and blessed him, telling him that in the merit of this great mitzvah, he would one day become very wealthy and would be able to support talmidei chachamim.

After that Moshe went to learn in the Mir, where he became close to Harav Avraham Kalmanowitz, who had established a special network, Otzar HaTorah, to draw Sephardic Jews closer to their heritage. He asked Moshe to help him in this endeavor.

As a bachur, Moshe established dozens of Talmudei Torah and yeshivos for the members of Sephardic communities as a counterforce to the youth aliyah movement, which wanted to bring them to Israel and disconnect them from religion.

At the time, he was also close to the Chazon Ish, with whom he consulted on many issues. While he was in the Mir, Moshe’s father asked him to come to Tangiers to direct the institution. Reb Moshe asked the Chazon Ish if he should give up his learning to go to Tangiers, and the Chazon Ish replied that he had to take over the school because it would enable many children to learn Torah. Indeed, he succeeded in helping his father strengthen the foundations of religion there.

He was also close to the Vayechi Yosef of Pupa, zt”l, and Harav Yaakov Kamenetsky, zt”l, Rosh Yeshivas Torah Vodaas.

A relative, Harav Nosson Gestetner, zt”l, the Lehoros Nosson, who was Moshe’s chavrusa when he learned in Eretz Yisrael, said that he learned Shulchan Aruch Yoreh Deah, the laws of melichah, with him and marveled at his sharp mind and skill.

After marrying Leah, shetichyeh, the daughter of Harav Moshe Feldman, zt”l, of New York, they moved to Montreal and then Toronto, where he lived until the end of his life.

He was very successful in business and became one of the eminent supporters of Torah institutions in our generation. He was a pioneer in this area, setting an example for others by donating huge sums of money to the Torah world.

At the time, the Torah world had accrued tremendous debts, and Harav Schach asked him to get involved. He did so, with dedication and indescribable generosity. Reb Moshe also had a deep love for Torah, which stemmed from his strong yiras Shamayim.

Once he began giving large sums, people followed suit and it became much more common. He also gave generously to individuals who appealed to him for assistance.

Another effort in which he was very instrumental was a plan to help chareidim in Israel deal with the housing crisis. He would give some $10,000 to every couple who got married and wanted to buy an apartment, part as a grant and part as a loan. But in most cases he would forgo the loan, considering this his contribution to those who were sitting and learning.

He was an active partner in the establishment of the chareidi communities in Beit Shemesh, Ramat Shlomo and Ofakim.

Throughout his life, he displayed a deep respect for talmidei chachamim and a fervent sense of ahavas Yisrael. He conducted all his philanthropic endeavors extremely modestly.

About five years ago he fell ill, but he maintained his busy schedule of learning and helping others. In the past few weeks his condition worsened, and he passed away on Friday.

The levayah took place on Motzoei Shabbos in Toronto, from where it departed for Eretz Yisrael. On Sunday evening, another large levayah took place at the Ahavas Torah shul in the Kiryat Sanz neighborhood of Yerushalayim. Reb Moshe had built the shul but refused to have his name mentioned, and thus it was called Ahavas Torah, symbolizing what he felt. The levayah was broadcast to Toronto by a live hook-up.

He was buried on Har Hamenuchos.

Reb Moshe is survived by his wife, Leah, who stood devotedly at his side in all his endeavors; his sons Reb Yissachar Dov and Reb Yechezkel Shraga; his three daughters, Reb.Chaya Muller, wife of Harav Yisrael Muller, a Rosh Kollel in Toronto; Goldie Hauer, wife of Reb Shmuel Hauer; and Libby Brachfeld, wife of Reb Chanoch Brachfeld.

Reb Moshe also leaves behind his brothers, Reb Yissachar Dov Reichman and Reb Yitzchak Eizik Reichman, and many grandchildren and great-grandchildren who follow in his path of Torah and chessed.

This article appeared in print on page 1 of the October 28th, 2013 edition of Hamodia.