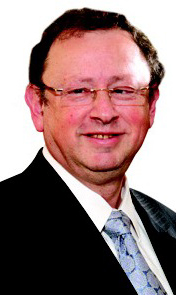 Abraham Biderman was elected Tuesday to serve as co-chairman of the World Jewish Restitution Organization, joining Natan Sharansky in chairing the body charged with distributing billions of Holocaust restitution from Germany and other countries.

Mr. Biderman has been involved in Jewish and Holocaust-related issues his whole life. His parents were Holocaust survivors from Poland and he was born in the Tempelhof Displaced Persons camp in Germany. He is a trustee of Agudath Israel of America, chairman of the Hebrew Free Loan Society’s Investment Committee and a member of its board; a past president of the World Jewish Congress Foundation and he has played a leadership role in many other Jewish organizations and institutions.

“Nearly 70 years after the end of World War II, justice has not yet been done regarding the return of private and communal property in most former Nazi-occupied countries,” Mr. Biderman said in a statement. “Stolen property must be returned. We will not rest until that which was taken is returned.”

Going forward, the WJRO is focusing its efforts on Poland, the only major country in Central or Eastern Europe that has not passed legislation for the restitution of private property stolen during the Holocaust.

This article appeared in print on page 18 of the October 9th, 2013 edition of Hamodia.