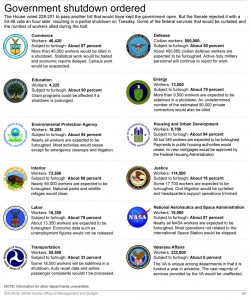 The National Institutes of Health began turning away patients for experimental treatment, and rugged Yellowstone National Park was closed to visitors as the vast machinery of government clanged into partial shutdown mode. President Barack Obama warned that more families and businesses would be hurt if it lasted much longer, while Republicans insisted the fault was not theirs but Obama’s and his fellow Democrats’.

“What we are doing now puts American lives at risk,” said Sen. Dianne Feinstein (D-Calif.), warning Tuesday of the effects on intelligence agencies of a government closure that some lawmakers said could last for weeks.

At the White House, Obama unleashed a blistering attack on Republicans, accusing them of causing government’s first partial closure in 17 years as part of a failed, non-stop “ideological crusade” to wipe out his signature health-care law.

Republicans countered that
Democrats were to blame for refusing to negotiate on Obama’s health care overhaul, and they disclosed plans in the House for quick passage of measures aimed at reopening small slices of the federal establishment. The bills covered the Department of Veterans Affairs, the Park Service and a portion of the Washington, D.C., government funded with local tax revenue.

Meanwhile, the major next step implementing the health care law was launched nationwide as Americans got their first chance to sign up in the state exchanges designed to give a first-time option to people who have no health insurance.

In Washington, some Republicans conceded privately they might bear the brunt of any public anger over the shutdown – and seemed resigned to an eventual surrender in their latest bruising struggle with Obama.

Rep. Scott Rigell of Virginia said it was time to pass legislation reopening the government without any health care impediments. “The shutdown is hurting my district — including the military and the hard-working men and women who have been furloughed due to the defense sequester,” he said.

But that was far from the majority view among House Republicans, where lawmakers prevailed more than a week ago on a reluctant leadership to link federal funding legislation to “Obamacare.” In fact, some conservatives fretted the GOP had already given in too much.

Gone is the Republican demand for a full defunding of the health care law as the price for essential federal funding. Gone, too, are the demands for a one-year delay in the law, a permanent repeal of a medical device tax and a provision regarding women’s health care.

In place of those items, Republicans now seek a one-year-delay in the requirement for individuals to purchase insurance, and they want a separate provision that would dramatically raise the cost of health care for the president, vice president, members of Congress and thousands of aides.

Speaker John Boehner (R-Ohio) has declined to say whether he would permit a vote on a stand-alone spending bill to reopen the government, stripped of health care provisions, though Democrats and Obama continued to call on him to do so. “He’s afraid it will pass,” said Sen. Dick Durbin (D-Ill.).

Sen. Cruz (R-Texas), the most prominent advocate of the “Defund Obamacare” movement, said the Senate should follow the House’s lead and quickly reopen programs for veterans and the parks. He spoke in a Capitol closed to regular public tours, part of the impact of a partial shutdown that sent ripples of disruption outward.

Officials said roughly 800,000 federal employees would be affected by the shutdown after a half-day on the job Tuesday to fill out time cards, put new messages on their voice mail and similar chores.

Among them were some personnel at NIH’s famed hospital of last resort. Dr. Francis Collins, agency director, estimated that each week the shutdown lasts will force the facility to turn away about 200 patients, 30 of them children, who want to enroll in studies of experimental treatments. Patients already at the hospital are permitted to stay.

“None of us want to be in a shutdown. And we’re here to say to the Senate Democrats, ‘Come and talk to us,’” said House Majority Leader Eric Cantor (R-Va.), as GOP lawmakers called for negotiations with the Senate on a compromise.

It was an offer that Senate Democrats chose to refuse, saying there was nothing to negotiate until Republicans agreed to reopen the federal establishment.

“The government is closed because of the irrationality of what’s going on on the other side of the Capitol,” said Senate Majority Leader Harry Reid.

In addition to “closed” signs and barricades springing up at the Lincoln Memorial and other tourist attractions, NASA and the Environmental Protection Agency were virtually shuttered, and Obama said veterans’ centers would be shut down.

Government workers classified as essential, such as air traffic controllers, Border Patrol agents and most food inspectors, remained on the job.

So, too, members of the military, whose pay was exempted from the shutdown in separate legislation Obama signed late Monday. Employees whose work is financed through fees, including those who issue passports and visas, also continued to work. The self-funded Postal Service remained in operation, and officials said the government will continue to pay Social Security benefits and Medicare and Medicaid fees to doctors on time.

At the White House, aides discussed whether Obama should change plans for a trip to Asia scheduled to begin Saturday. Staffing was reduced at the famed mansion, where a groundskeeper working outside at daybreak said he was doing the work normally handled by four.

In Congress, some aides were furloughed and others said they were working without pay. Democratic Sen. Tom Carper sent an email to his Delaware constituents telling them not to expect responses to their emails and phone calls.

Lawmakers and the president were still getting paid, however, at a rate totaling more than $250,000 per day for all of them.

This article appeared in print on page 1 of the October 2nd, 2013 edition of Hamodia.