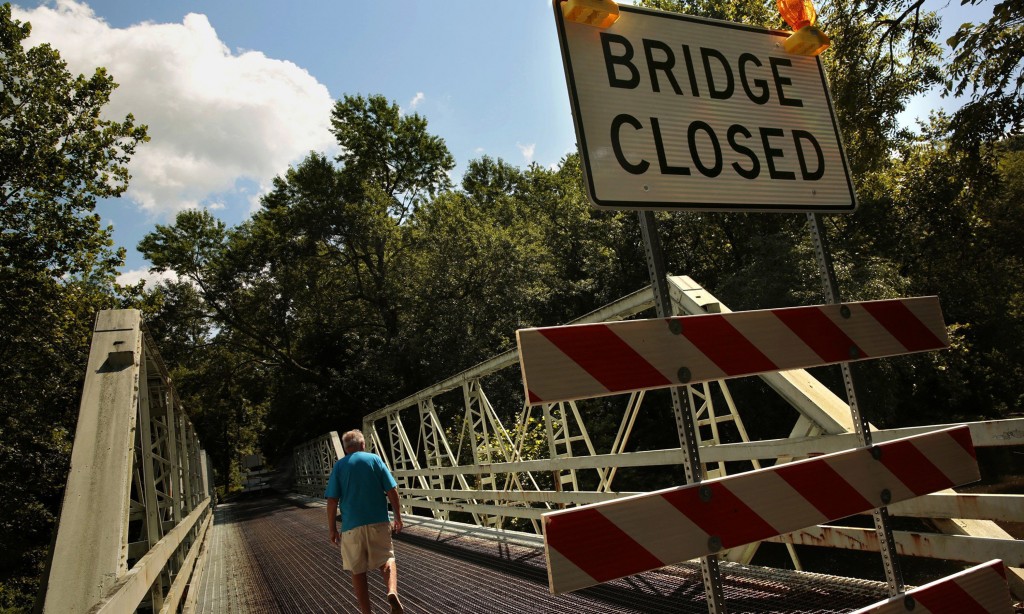 Engineers think that three of the bridges closest to Dave Wisler’s home are about ready to collapse.

One, a picturesque one-lane structure built in 1893, became so perilous it was closed last summer, and the county doesn’t have the money to fix it. Another bridge, just down the road, is well-known for the concrete that chips off the bottom as children play in the creek below — it’s currently under repair.

Traffic was diverted to a third bridge nearby, but some drivers noticed a worrying humming noise as they drove over it, and their windows rattled. Authorities have since found that bridge is too dangerous to drive over too, and don’t know when they’ll be able to reopen it.

To get to a barn that he’s restoring across the river, about 300 yards away, Wisler now has to drive 15 minutes past homes and parks and blinking orange and white construction signs.

“I can’t get there from here,” said Wisler, peering over the small creek that winds through this rural town just outside Philadelphia.

America’s roads and bridges have been eroding for decades, but the deeper they fall into disrepair, the less money there is to fix them. First, the recession crippled local budgets, cutting the money available for transportation projects. As states began to recover, the federal government adopted its own mandatory budget cuts via sequestration. Then, last month, the federal legislation that annually funds transportation projects across the country hit a roadblock of Republican opposition that throttled multibillion-dollar transportation bills in the House and Senate.

The new political deadlock in Washington, D.C., comes as the Federal Highway Administration estimates that bridge and road repair needs have escalated to $20.5 billion a year.

Every day, U.S. commuters are taking more than 200 million trips across deficient bridges, according to a variety of analyses, and at least 8,000 bridges across the country are both “structurally deficient” and “fracture critical” — engineering terms for bridges that could fail if even a single component breaks.

“These bridges will all eventually fall down,” said Barry LePatner, a construction attorney who has documented bridge deficiencies in all 50 states.

Officials from several states, including Pennsylvania, have warned that without substantial new federal funding of the kind recently stalled in Congress, they may be forced to close many of their deficient bridges, potentially preventing cars, emergency vehicles and school buses from getting to entire neighborhoods. Some states are looking for their own ways to raise money. Eight states raised their gas taxes last month, including Wyoming, which has a Republican-dominated legislature.

California and other states with growing populations also face the new infrastructure demands that come with the influx of more cars and trains. Analysts say the state needs to spend $750 billion on infrastructure projects in the next 10 years to remain competitive.

Some of the most important bridge links in the country are now threatened by age. The longest bridge in New York, the Tappan Zee Bridge over the Hudson River, 25 miles north of Manhattan and a crucial link for the interstate highway system in the New York metropolitan area, is potentially subject to catastrophic failure, engineers say. Yet replacing it will cost at least $5.2 billion — and as much as $16 billion with transit options.

The potential repercussions of ignoring the funding shortage are huge, as recent bridge collapses in Minnesota and Washington state have shown. In 2007, Minnesota’s fourth-busiest bridge, which spanned the Mississippi River, collapsed, killing 13. Engineers found that additional weight placed on the bridge from construction had exacerbated a design flaw. And earlier this year in Washington, days after the state’s governor pleaded for a transportation tax increase, a bridge on Interstate 5 plunged into the Skagit River after being hit by a truck.

“It is only a matter of time,” said LePatner, whose website, SaveOurBridges.com, maps these 8,000 deficient bridges, including two of those recently closed near Wisler’s home. “Because these bridges are fragile and the public is unsafe driving over them.”

Part of the problem is timing. Many of the nation’s roads and bridges were built during the Eisenhower administration in the 1950s and are now all coming due for repair at the same time.

But the bigger issue is funding. Money to fix roads and bridges comes from the federal government, which raises funds through a gas tax. The gas tax has not been raised since 1993, and in an era of anti-tax rhetoric in Washington, advocates say there’s little hope of seeing an increase anytime soon. The rise of fuel-efficient vehicles and hybrids is also making the gas tax less lucrative.

Big hits to state budgets during the recession also cut back funding streams, as competition from Brazil and China drove up the price of cement and asphalt. In many cases, structures deteriorated more quickly because they weren’t being maintained.