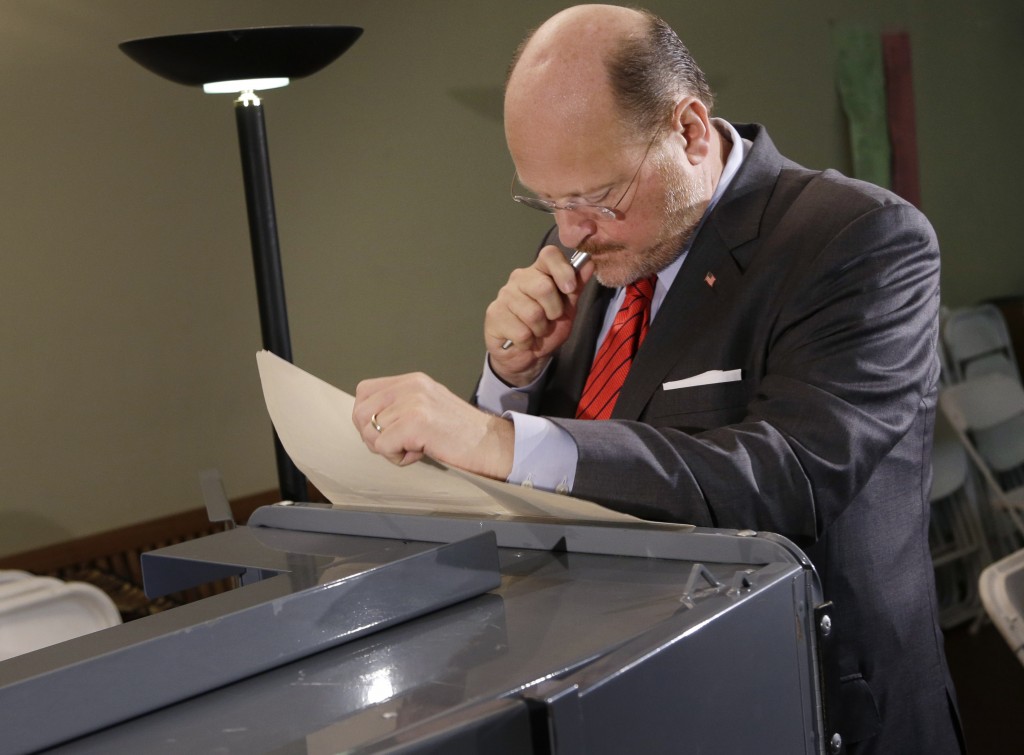 Turnout appeared light, but the city’s complaint line received several thousand voting-related calls. Many reported jams and breakdowns in the antiquated lever machines, which were hauled out of retirement to replace much-maligned electronic devices.

In some sites, the broken machines forced voters to use pen and paper to cast their ballot. Republican mayoral candidate Joe Lhota presumably wrote his own name when his machine broke at his Brooklyn polling place. Democrat Anthony Weiner also encountered a problem when poll workers were briefly unable to find his signature.

Other candidates had no trouble voting for themselves, including Democratic front-runner Bill de Blasio, the city’s public advocate, who is pitching himself as the cleanest break from Mayor Michael Bloomberg’s administration.

De Blasio’s rise was as sudden as it was unexpected. He benefited from placing his interracial family at the heart of his campaign, connecting with voters over the need for NYPD reforms, and by drawing away voters from Weiner.

“He’s the candidate that represents the most change,” said Joshua Bauchner, 40, an attorney who voted in Harlem for de Blasio.

Republicans will look to continue an improbable winning streak. Though outnumbered by Democrats in the city 6 to 1, the GOP has won the last five mayoral elections. Bloomberg was an independent running on the Republican line four years ago.

Lhota, the former MTA chairman who received acclaim for steering the transit agency through Superstorm Sandy last fall, has led the polls all campaign. A former deputy mayor to Rudolph Giuliani, Lhota has pledged to maintain the city’s record low crime rates.

His primary challenger is John Catsimatidis, a billionaire grocery store magnate who has unleashed a series of blistering attack ads on Lhota, including one that mocks the front runner for dismissing Port Authority police officers as “mall cops.” Catsimatidis has spent more than $4 million of his own money on the race, but that’s a far cry from the $102 million Bloomberg spent four years ago.