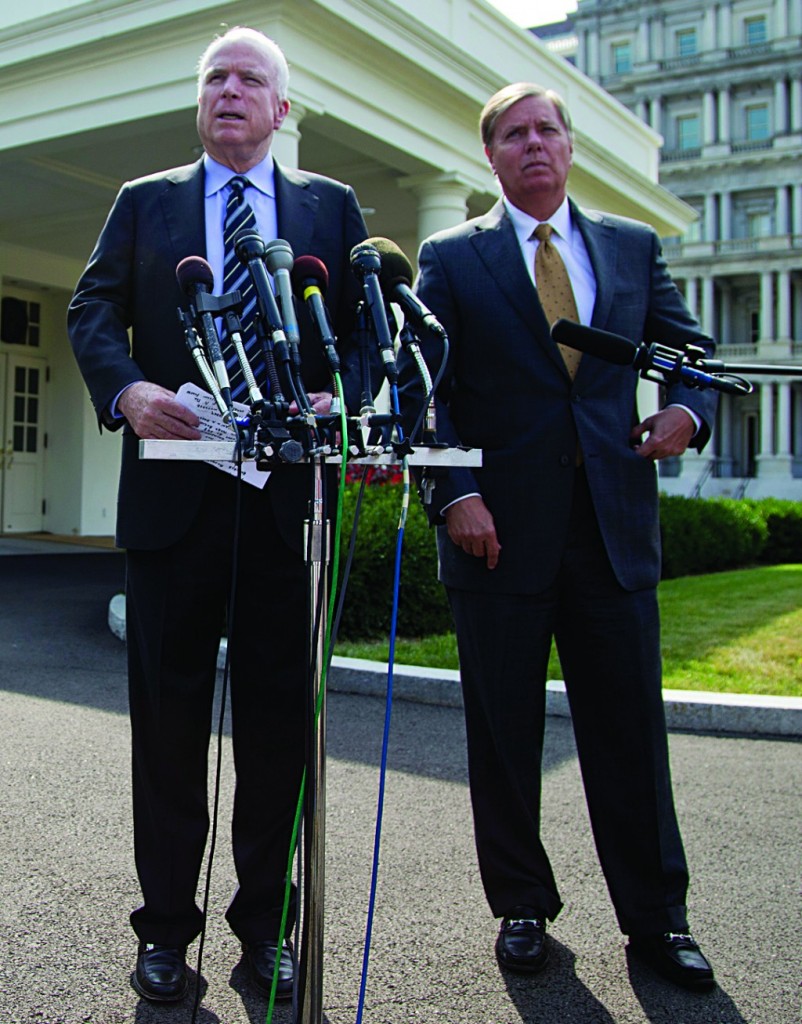 President Obama got some conditional support for military intervention in Syria from two key Republican foreign policy hawks Monday who said the president still needs to make a strong case for attacking the regime of President Bashar Assad if he wants to win congressional backing.

Sens. John McCain of Arizona and Lindsey Graham of South Carolina said it would be a mistake for Congress to reject Obama’s request. Once critical of the kind of limited strike advocated by the administration, the senators said they were more inclined to back Obama’s call for military action against Syria if it helps destroy the regime’s missile launching capabilities and if the U.S. commits to provide more assistance to Syrian opposition forces.

McCain and Graham, who often speak in unison on foreign policy matters, met with Obama at the White House for about an hour Sunday to express their concerns that U.S. military action that was too limited would do little to change the course of the two-and-a-half year civil war.

“We have to make it clear that a vote against this would be catastrophic in its consequences,” now and in future international crises, McCain told reporters outside the White House following a private meeting that he and Graham had with Obama.

Said Graham: “A degrading strike limited in scope could have a beneficial effect to the battlefield momentum. There will never be a political settlement in Syria as long as Assad is winning.”

The meeting with the two Republicans came amid continued skepticism in Congress over the wisdom of such a strike. Several Democrats in a conference call with administration officials pushed back against military action, according to Democratic aides on the call. Others demanded narrower authorization than that requested by the administration.

“The White House has put forward a proposed bill authorizing the use of force that, as drafted, is far too broad and open-ended, and could be used to justify everything from a limited cruise missile strike to a no-fly zone and the introduction of American ground troops,” said Rep. Adam Schiff, (D-Calif.), a member of the House intelligence committee.

McCain has been pressing Obama for more than a year to intervene militarily in Syria as the civil war there has widened. He warned that the administration’s plan now could be more difficult because Assad “is moving his forces around.” Both McCain and Graham questioned the wisdom of the administration publicly signaling in advance its intention to strike.

Obama had said earlier this year that any documented use of chemical weapons by Assad against his own population would amount to a “red line” that the international community would not let him cross. Obama now has called for a military response to Assad’s purported use of chemical weapons, and the administration said Sunday it had evidence he used the chemical sarin gas in a Damascus suburb recently.

McCain said he believes lawmakers awaiting a critical vote on Syria “must be assured that this is different from the past two years of neglect” on the part of the administration.