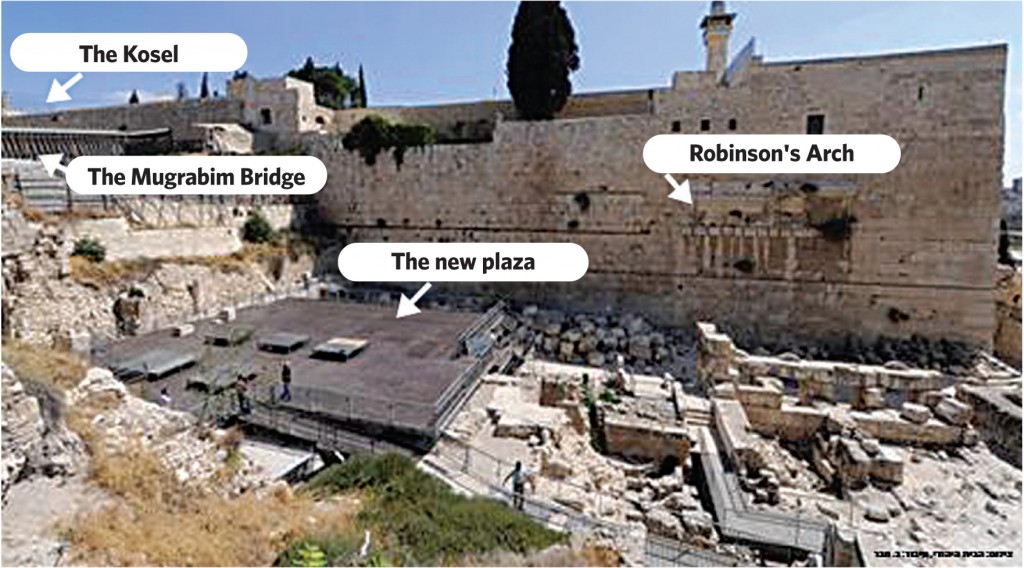 The Reform-backed Women of the Wall launched a sit-in at the Kosel on Sunday to protest the government’s proposal to allocate a separate plaza for them to gather near Robinson’s Arch south of the Kosel Plaza.

Minister of Economy Naftali Bennett — who is also the Minister of Yerushalayim and Diaspora Affairs and the Minister of Religious Services — announced yesterday that a plaza has been prepared for use by the women, who have been gathering at the Kosel every Rosh Chodesh to pray in a way that is contrary to halachah.

According to the plan, the Women of the Wall will not be allowed into the actual Kosel Plaza to perform their ceremonies as they have been doing. However, it means that the government will sanction them conducting their provocation at the new site, which has caused a
storm of responses.

Rav of the Kosel, Harav Shmuel Rabinowitz, opposed Bennet’s plan: “First, I condemn and oppose any action which conflicts with halachah, all the more so when it occurs at the Kosel. In addition, I think it would be fitting to wait for the results of the committee appointed by the prime minister, which is seriously deliberating the various options, sensitivities, and halachic requirements.”

The construction of the new plaza is in the advanced stages, and it is scheduled to open during the chagim of Tishrei. It is a large, 450 square-meter area located under the Mugrabim Bridge, adjacent to Robinson’s Arch. (See photo.)

City Councilor Rabbi Yossi Deutsch of UTJ blasted the plan, calling it a “shameful proposal.” He added, “Who allowed Bennett to grant the provocative Reform women the right to even get near the holy Kosel to perform their ceremonies? It makes no difference exactly where or how far it is from the Kosel plaza. The actual fact that they are being granted a plaza adjacent to the remnant of our Beis Hamikdash — in clear derision of the holiness of the site — is a shameful proposal that is deserving of condemnation.”

When asked how the issue will be dealt with, Rabbi Deutsch replied, “In any case, we will act as we always have, after consulting and receiving instructions from Gedolei Yisrael.”

The proposal preempts Jewish Agency chairman Natan Sharansky’s proposal to set up a new space for egalitarian prayer services at the Kosel, but was nevertheless welcomed by Sharansky.

However, the Women of the Wall angrily rejected the proposal outright, saying that it “exiles” them from the Kosel and declared a round-the-clock sit-in in protest. Ten to 12 members of the group arrived on Sunday evening for the sit-in.

In response to the announcement of a sit-in, Women For the Wall, the grassroots organization of women dedicated to preserving the traditional sanctity of the Western Wall, released a statement saying that “a holy site is not the place for political activity.”

“Yerushalayim is not Selma, and this issue cannot be compared to the fight for civil rights in the U.S.,” said Ronit Peskin, co-founder of Women For the Wall, referring to sit-ins and other tactics used during the ‘50s and ‘60s.

“Their carefully-angled photographs avoided showing that they were outnumbered over 25:1 by women who came to the Kosel not for any preannounced political activity, but in order to pray in the traditional fashion,” Women For the Wall’s statement said.

“By organizing a sit-in at the Kotel, Women of the Wall demonstrate what [WOW leader] Anat Hoffman has been saying for year — that WOW views the Kotel as an opportunity, and lacks reverence for the place held sacred by millions of Jews around the world,” noted Leah Aharoni, co-founder of Women For the Wall. “They have failed to galvanize serious support for their radical agenda, intended to change the traditions of prayer that Jews have followed for millennia. This political protest shows that they do not understand what it means to respect the sanctity of the place.”

“The Kotel is a holy site and a symbol of unity for Jews worldwide,” added Peskin, “and it should not be used to promote the political agenda of any specific group. They should take their business to the Knesset where it belongs.”