National Putin Says No to U.S. Request for Snowden
National 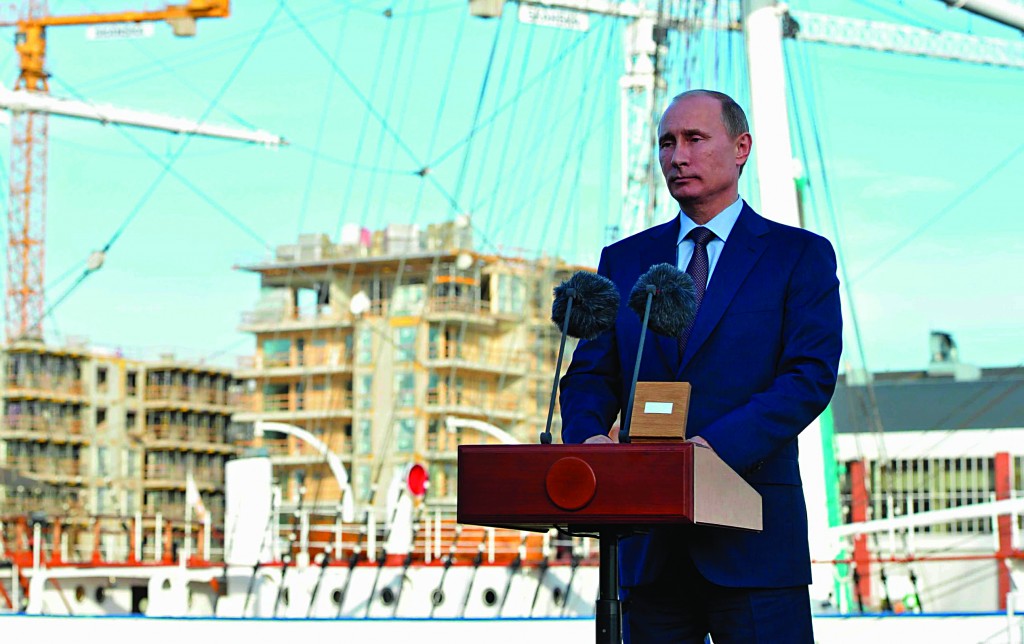 Snowden is in the transit zone of a Moscow airport and has not passed through Russian immigration, Putin said, meaning he is not technically in Russia.

After arriving Sunday on a flight from Hong Kong, Snowden registered for a Havana-bound flight from Moscow on Monday en route to Venezuela and then possible asylum in Ecuador, but he didn’t board the plane.

Snowden’s whereabouts since then have been a mystery, and Putin’s comments were the first time Russia has made clear it knows where he is.

Speculation has been rife that Russian security agencies might want to keep Snowden in Russia for a more thorough debriefing, but Putin denied that.

“Our special services never worked with Mr. Snowden and aren’t working with him today,” Putin said at a news conference during a visit to Finland.

Putin said that because there is no extradition agreement with the U.S., it couldn’t meet the U.S. request.

“Mr. Snowden is a free man, and the sooner he chooses his final destination the better it is for us and for him,” Putin said. “I hope it will not affect the business-like character of our relations with the U.S. and I hope that our partners will understand that.” 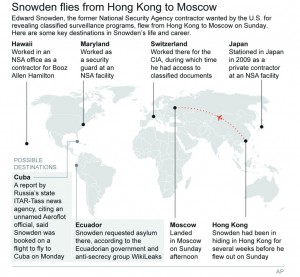 U.S. Secretary of State John Kerry said Tuesday that although the United States does not have an extradition treaty with Russia, it wants Moscow to comply with common law practices between countries where fugitives are concerned.

Putin’s staunch refusal to consider deporting Snowden shows the Russian president’s readiness to further challenge Washington at a time when U.S.-Russian relations are already strained over Syria and a Russian ban on adoptions by Americans.

A Kremlin decision to provide even temporary shelter and safe transit to Snowden would embarrass Washington. And despite Putin’s denial, security experts believe the Russian special services wouldn’t miss the chance to question a man who is believed to hold reams of classified U.S. documents and can shed light on how the U.S. intelligence agencies collect information.

Igor Korotchenko, director of the Center for Global Arms Trade and editor of National Defense Magazine, said Snowden would be of particular interest because little is known about digital espionage.

“The security services would be happy to enter into contact with Mr. Snowden,” Korotchenko said.

Putin compared Snowden to WikiLeaks founder Julian Assange, who has been provided asylum in the Ecuadorean Embassy in London, saying that both men were labeled criminals but consider themselves rights activists and champions of freedom of information.

“Ask yourself a question: should people like that be extradited so that they put them in prison or not?” he said. “In any case, I would prefer not to deal with such issues. It’s like shearing a piglet: a lot of squealing and little wool.”

In an apparent reference to claims that Moscow could have played a role in Snowden’s exit from Hong Kong, he said that his arrival was a “complete surprise” and dismissed accusations against Russia as “ravings and sheer nonsense.”

“He doesn’t need a visa or any other documents, and as a transit passenger he has the right to buy a ticket and fly wherever he wants,” Putin said.

Russian news media had reported that Snowden remained in a transit zone of Moscow’s Sheremetyevo Airport, which is separate from the regular departure zones. He has not been seen by any of the journalists that have been roaming the airport in search of him.

Legally, an arriving air passenger only crosses the border after clearing immigration checks.

“We consider the attempts to accuse Russia of violating U.S. laws and even some sort of conspiracy, which on top of all that are accompanied by threats, as absolutely ungrounded and unacceptable,” Lavrov said. “There are no legal grounds for such conduct by U.S. officials.”

U.S. and Ecuadorean officials had said they believed Snowden was still in Russia.

Kerry called for “calm and reasonableness.”

“We would hope that Russia would not side with someone who is ‘a fugitive from justice,’” Kerry said at a news conference in Saudi Arabia.

The U.S. has revoked Snowden’s passport.

A representative of WikiLeaks has been traveling with Snowden, and the organization is believed to be assisting him in arranging asylum. Assange, the group’s founder, said Monday that Snowden was only passing through Russia and had applied for asylum in Ecuador, Iceland and possibly other countries.

A high-ranking Ecuadorean official told the Associated Press that Russia and Ecuador were discussing where Snowden could go, saying the process could take days. He also said Ecuador’s ambassador to Moscow had not seen or spoken to Snowden. The official spoke on condition of anonymity because he was not authorized to discuss the case publicly.

“We’re following all the appropriate legal channels and working with various other countries to make sure that the rule of law is observed,” President Barack Obama told reporters.

The Kremlin has previously said Russia would be ready to consider Snowden’s request for asylum.

Snowden is a former CIA employee who later was hired as a contractor for the NSA. In that job, he gained access to documents that he gave to newspapers The Guardian and The Washington Post to expose what he contends are privacy violations by an authoritarian government.

Snowden also told the South China Morning Post newspaper in Hong Kong that “the NSA does all kinds of things like hack Chinese cellphone companies to steal all of your SMS data.” He is believed to have more than 200 additional sensitive documents in laptops he is carrying.

Some observers said that in addition to the sensitive data, Snowden’s revelations have provided the Kremlin with propaganda arguments to counter the U.S. criticism of Russia’s crackdown on opposition and civil activists under Putin.

“They would use Snowden to demonstrate that the U.S. government doesn’t sympathize with the ideals of freedom of information, conceals key information from the public and stands ready to open criminal proceedings against those who oppose it,” Konstantin Remchukov, the editor of independent daily Nezavisimaya Gazeta, said on Ekho Moskvy radio.

Putin has accused the U.S. State Department of instigating protests in Moscow against his re-election for a third term in March and has taken an anti-American posture that plays well with his core support base of industrial workers and state employees.