A voracious wildfire driven in all directions by shifting winds destroyed at least 360 homes — a number that was likely to climb as the most destructive blaze in Colorado history burned out of control for a third day through miles of tinder-dry woods.

“I never in my wildest dreams imagined we’d be dealing a year later with a very similar circumstance,” said El Paso County Sheriff Terry Maketa, who drew audible gasps as he announced the number of homes lost to the blaze in Black Forest.

Hours later, residents of 1,000 homes in Colorado Springs were ordered to evacuate. Thursday’s evacuation was the first within the city limits. About 38,000 other people living across roughly 70 square miles were already under orders to get out.

Colorado’s second-largest city, with a population of 430,000, also asked residents of 2,000 more homes to be ready to evacuate. The streets became gridlocked with hundreds of cars.

Hot, gusty winds fanned the 23-square-mile wildfire, sending it into new areas and back into places that had previously been spared.

No injuries or deaths have been reported. The Red Cross said more than 800 people stayed at shelters.

Black Forest, where the blaze began, offers a case study in the challenges of tamping down wildfires in Colorado and across the West, especially with growing populations, rising temperatures and a historic drought.

Developers describe Black Forest as the largest contiguous stretch of ponderosa pine in the United States — a thick, wide carpet of vegetation rolling down from the Rampart Range that thins out to the high grasslands of Colorado’s eastern plains. Once home to rural towns and summer cabins, it is now dotted with million-dollar homes and gated communities — the result of the state’s population boom over the past two decades. 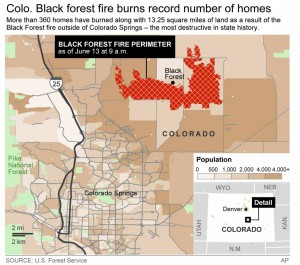 This article appeared in print on page 1 of the June 14th, 2013 edition of Hamodia.