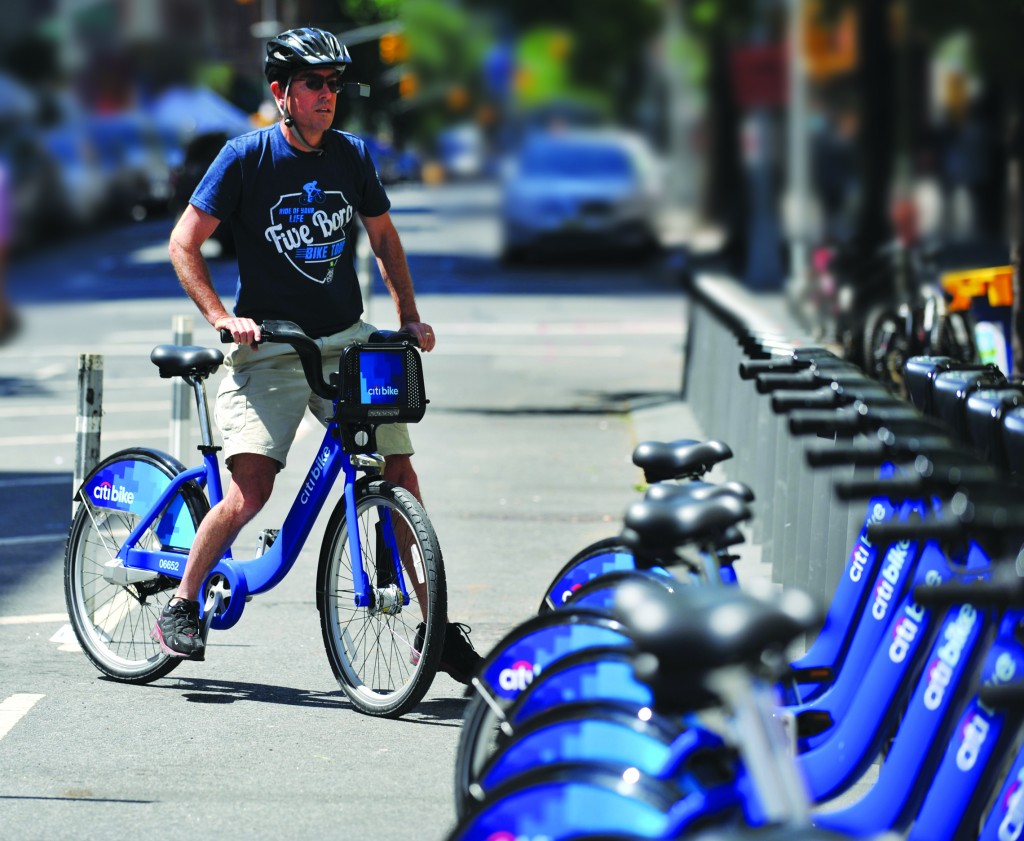 The nation’s biggest bicycle-sharing program got rolling Monday, as thousands of New Yorkers got their first chance to ride a network billed as a new form of public transit in a city known for it.

Suraf Asgedom pedaled along a lower Manhattan street on one of the royal-blue, quick-rental bikes, headed for a gourmet supermarket that’s usually a 25-minute walk from his apartment. The medical executive doesn’t own a bicycle because it’s a hassle to haul one downstairs, find a place to lock it up on the street and worry about it, he said.

“This just makes it much more convenient,” said Asgedom, 39, who plans to use the bike system to get to work at a downtown hospital.

The privately financed program — called Citi Bike, after lead sponsor Citigroup Inc. — kicked off with 6,000 bikes at more than 300 stations. Plans call for expanding it to 10,000 bikes
docked at 600 places in Manhattan, Brooklyn and Queens. Riders now can unlock the three-gear, cruising-style bikes from any station, take them for 45-minute rides and return them to any rack.

“We now have an entirely new transportation network without spending any taxpayer money,” Mayor Michael Bloomberg said at a news conference.

One of more than 500 bike-sharing systems around the world, New York’s, with 15,000 subscribers already, is the biggest in the United States.

While many New Yorkers already do without cars, Bloomberg’s administration has added hundreds of miles of bike lanes and promoted cycling as a healthy and environmentally friendly alternative to driving. Officials see bike-sharing as a big next step.

Some residents are incensed about the bike stations, saying the racks block entrances to their buildings or take up park space for a profit-making program.

“We’re not against the bikes — we’re against them in our park,” said Lora Tenenbaum, one of the sign-carrying critics who came to Bloomberg’s news conference.

Some racks have been shortened or moved, including one in front of a Greenwich Village apartment house where owners sued the city over it. Some of the rack was removed to create a gap in front of the main door.

Officials say they held 400 community meetings to decide where to put the racks. And Bloomberg noted that New Yorkers have long had to work around curbside obstacles.

Citi Bike subscribers pay a $95 annual fee for unlimited rides of 45 minutes. Starting June 2, riders also will be able to buy a 24-hour pass for about $10 and a seven-day pass for $25.