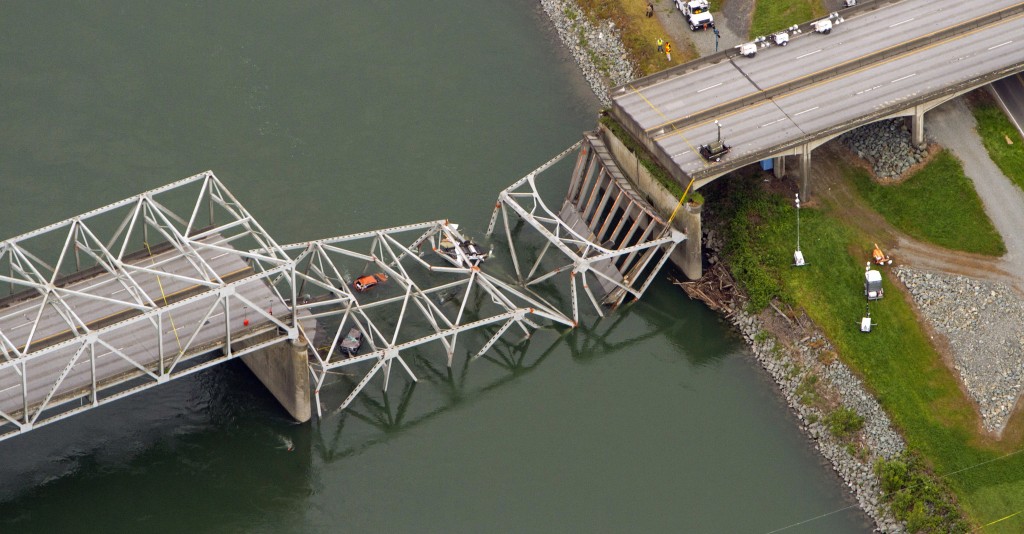 The Skagit River Bridge is a forgettable steel structure to drivers whizzing past on Interstate-5.

But Thursday’s collapse of a span just before the busy Memorial Day weekend closed part of I-5 and sent businesses and government leaders scrambling to minimize the potential economic hit.

“We do a lot of business out of Vancouver,” said Ken Kettler, president of Tulalip Resort in Marysville, about 25 miles south of the collapsed bridge. Canadians account for about 20 percent of the 370-room hotel’s occupancy.

“Hopefully they’ll be patient. Luckily there are two to three alternate routes,” he said.

While some businesses in Skagit County said the immediate effects on Friday were minimal, the economic impact will depend on how long the Interstate 5 segment is broken, how much time is added to trips and how many trips will be avoided because of the inconvenience.David Ellis, a research scientist at the Texas A&M Transportation Institute, said the sudden bottleneck illustrates “how often we take for granted this transportation infrastructure we have out there.”

The Whatcom Council of Governments, a regional planning group, suggests the bridge’s collapse could have broad effects on tourism and trade.

The vast majority of trucks crossing the U.S.-Canada border do so at Blaine, Lynden and Sumas, all in Whatcom County and all of which are linked to the I-5 corridor, according to the Border Policy Research Institute at Western Washington University.

“These ports of entry are important to the state, the province and the nation,” said David Davidson, the institute’s associate director. “As it turns out, that bridge is too.”

Before the bridge’s collapse, an average 71,000 vehicles crossed it daily, including about 8,400 truck trips. Now, all traffic is being diverted indefinitely.

Detouring traffic will mean congestion on those alternate routes and delays for drivers.

“It can ultimately have an impact on the price of consumer goods because it costs more to get them to the final point of sale,” Ellis said.

After the 2007 collapse of Minnesota’s Interstate 35 West bridge over the Mississippi River, the state Department of Transportation estimated it reduced the state’s economic output by $113,000 per day and cost bridge users $400,000 a day in travel time and higher operating costs.

Ellis said the Minnesota bridge’s average daily traffic was about twice the volume on the Skagit River Bridge, with a similar mix of truck and auto vehicles.

The cascading effects of a bridge closure fall disproportionately on the trucking industry and freight-dependent sectors, including agriculture, construction, manufacturing, wholesale and retail.

Burlington-based ImPRESSions Worldwide, a leading supplier of used newspaper-printing presses, had three deliveries scheduled each day of the Memorial Day weekend—two from Portland, one from Canada.

“Things are a little bit iffy, but we’re taking it step by step and hoping everything will go as planned,” said Scott Johnson, the company’s vice president.

The bridge closure was causing some delays Friday in getting logs to the Sierra Pacific Industries saw mill in Burlington.

Leisure and hospitality businesses south of the Skagit River, such as Seattle Premium Outlets and the Tulalip Resort, will see fewer Canadian customers. That could cause a significant hit to sales-tax revenues for areas south of the bridge.

The Cascade Mall in Burlington is about a mile north of the collapsed bridge The 450,000-square-foot mall, with about 65 stores and restaurants, relies heavily on shoppers passing through Burlington on I-5 to and from Canada.

“We’re still open for business,” said Taylor Long, the mall’s property manager. It’s too soon to gauge the impact of the bridge collapse, he said, but “It’s not going to help us.”