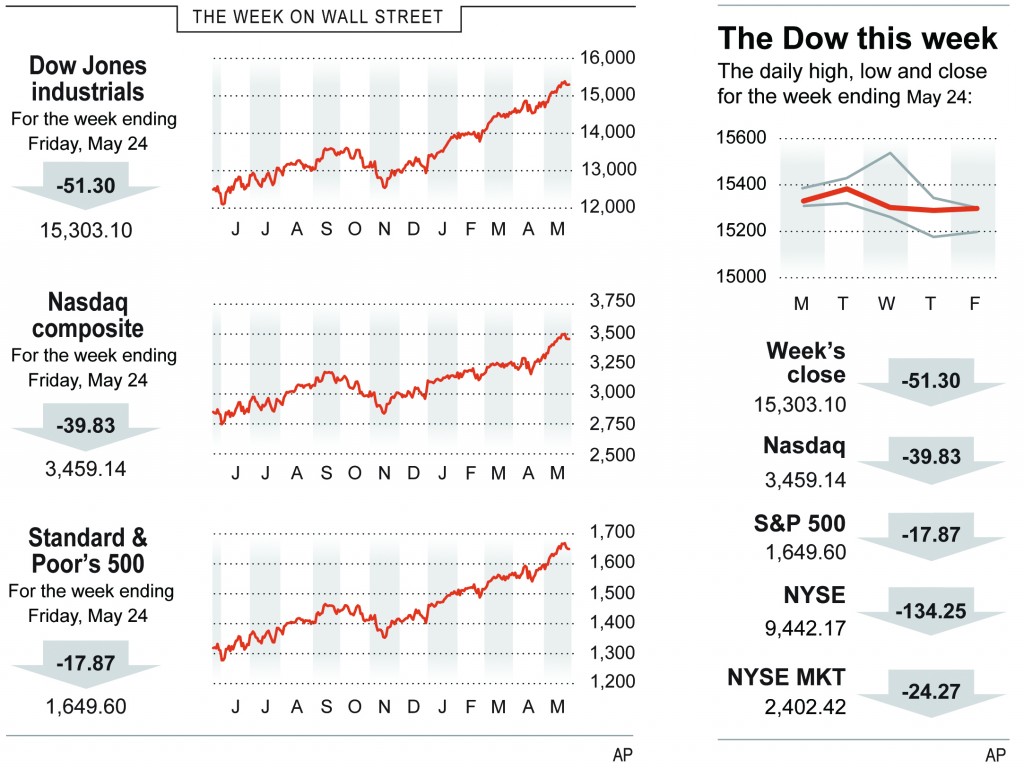 Major stock indexes closed out their first weekly loss in a month in quiet trading Friday.

Both indexes had their first weekly losses since the week ending April 19. A disappointing manufacturing report out of China and a sharp fall in Japan’s stock market rattled investors’ nerves this week. But anxiety over the Federal Reserve’s bond-buying program was the main culprit. Some investors interpreted comments from Fed officials to mean that the bank may start pulling its support for the economy sooner than they expected.

Marty Leclerc, the managing partner of Barrack Yard Advisors, an investment firm in Bryn Mawr, Pa., said the weekly drop wasn’t cause for concern. Even market rallies have to take the occasional break, he said.

“It’s up like a rocket blast this year,” Leclerc said of the stock market. “For there to be a little bit of a pullback is perfectly understandable.”

The market headed lower at the start of trading on Friday, then spent the rest of the day slowly recovering ground. By the closing bell, market indexes were roughly back to where they started.

Procter & Gamble announced late Thursday that it’s bringing back its former CEO, A.G. Lafley, to run the company. The world’s largest consumer-products maker, whose brands include Tide and Crest, is trying to increase sales in the face of tough competition. P&G rose $3.18 to $81.88.

Sears plunged 14 percent after the department-store chain reported a steep quarterly loss and slumping sales after the market closed Thursday. Sears lost $7.92 to $50.25.

Eight of the 10 industry groups in the S&P 500 fell. Only financial stocks and consumer staples makers rose.

The stock market slipped Friday despite an encouraging report on U.S. manufacturing. The government said orders for long-lasting goods rebounded in April, helped by demand for aircraft and stronger business spending. The report suggests economic growth may hold steady this spring.

Until this week, signs of slow but steady economic growth and record profits for big companies had propelled stock-market indexes to all-time highs.

All but 11 companies in the S&P 500 have posted their first-quarter earnings, and the results have turned out much better than expected. Nearly seven of 10 have reported higher earnings than analysts had estimated. Overall profits in the first quarter are on track to climb 5 percent over the year before.

In the market for U.S. government bonds, the yield on the 10-year Treasury note dipped to 2.01 percent from 2.02 percent late Thursday.

Trading was light ahead of the long weekend. U.S. financial markets will be closed Monday for Memorial Day.

Among other stocks in the news Friday:

— Intuitive Surgical gained 5 percent after a jury decided in favor of the maker of robotic medical equipment in the first of many lawsuits filed against the company. The plaintiffs argued that Intuitive was negligent in training doctors to use its equipment. Intuitive’s stock rose $23.07 to $501.53.

— Titan Machinery plunged 9 percent. The company, which deals in agricultural and construction equipment, said late Thursday that weaker revenue will lead it to a wider quarterly loss than it had expected. Titan’s stock lost $2.10 to $20.40.