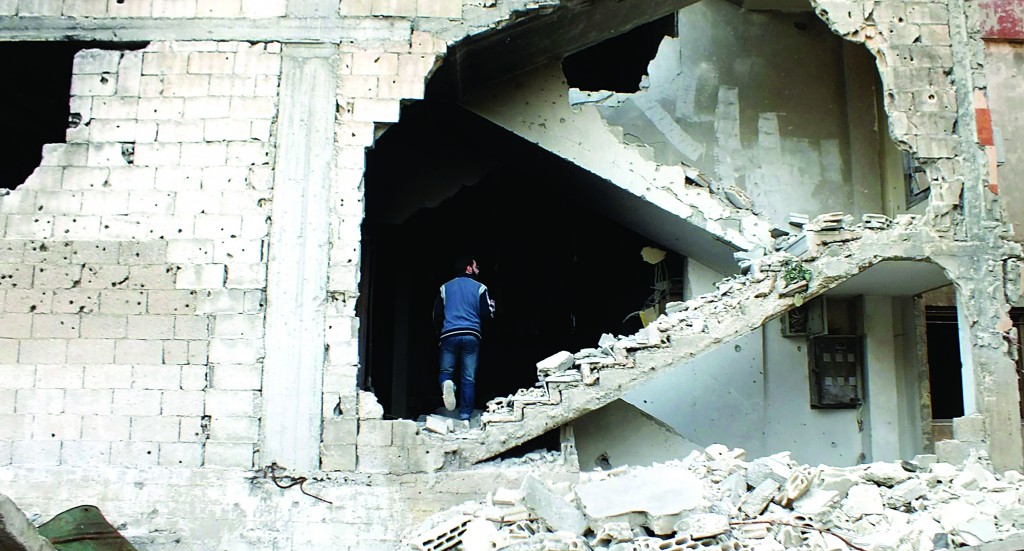 Syrian troops supported by Hizbullah terrorists launched an offensive to retake a major town near Lebanon from rebels on Sunday, the heaviest fighting yet involving a Lebanese armed group, opposition activists said.

At least 32 people were killed when rebel fighters clashed with mechanized Syrian army units and Hizbullah terrorists in nine points in and around the town of Qusair, six miles from the border with Lebanon’s Bekaa valley, they said.

Speaking from Qusair, activist Hadi Abdallah said Syrian warplanes bombed Qusair in the morning and shells were hitting the town at a rate of up to 50 a minute.

“The army is hitting Qusair

with tanks and artillery form the north and east while Hizbullah is firing mortar rounds and multiple rocket launchers from the south and west,” he said.

“Most of the dead are civilians killed by the shelling.”

The region near the Orontos River has been segregated into Sunni and Shi’ite villages in the civil war that grew out of protests against Syrian President Bashar al-Assad.

It is vital for Assad, who belongs to the Alawite sect, an offshoot of Shi’ite Islam, to keep open a route from Shi’ite Hizbullah’s strongholds in the Bekaa to areas near Syria’s Mediterranean coast inhabited by co-religionist Alawites.

Opposition sources say Syria’s coastal region could serve as an Alawite statelet in case Assad falls in Damascus, in a potential fragmentation of Syria along ethnic and sectarian lines that raises the prospect of many more deaths.

Sources in Lebanon’s Bekaa Valley said shells fired by rebels hit the edges of the town of Hermel, a stronghold of Hizbullah, which is backed by Iran, but no casualties were reported.

Syrian media said the army is “leading an operation against terrorists in Qusair,” with troops reaching the town’s center.

“Our heroic forces are advancing toward Qusair and are chasing the remnants of the terrorists and have hoisted the Syrian flag on the municipality building. In the next few hours we will give you joyous news,” the media said.

The United Nations says at least 80,000 people have been killed in the conflict, which started with peaceful demonstrations against four decades of family rule by Assad and his late father.

The protests were met by bullets, sparking an armed uprising that turned into a civil war mainly pitting majority Sunnis against the Alawite sect, which has controlled Syria since the 1960s.