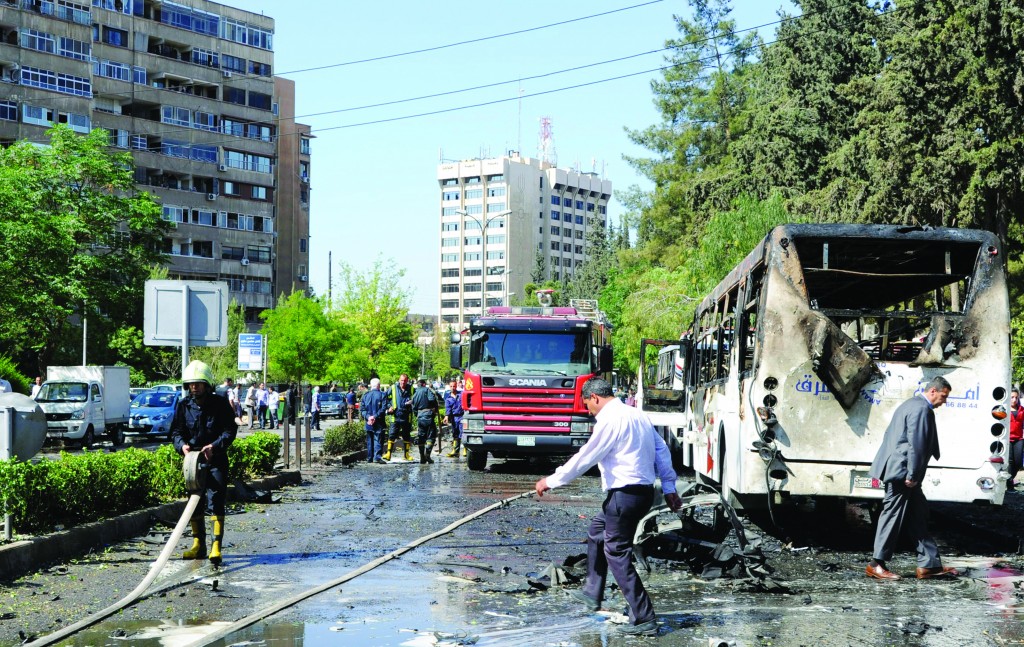 Syria’s prime minister survived a bomb attack on his convoy in Damascus on Monday, as rebels struck in the heart of President Bashar al-Assad’s capital.

As prime minister, Wael al-Halki wields little power but the attack highlighted the rebels’ growing ability to target symbols of Assad’s authority in a civil war that, according to the United Nations, has cost more than 70,000 lives.

Assad picked Halki in August to replace Riyadh Hijab, who defected and escaped to neighboring Jordan just weeks after a bombing killed four of the president’s top security advisers.

Monday’s blast shook the Mezze district soon after 9 a.m., sending thick black smoke into the sky. The Observatory said one man accompanying Halki was killed as well as five passers-by.

State media showed firemen hosing down the charred and mangled remains of a car. Close by was a large white bus, its windows blown out and its seats gutted by fire. Glass and debris were scattered across several lanes of a main road.

Mezze is part of a shrinking “Square of Security” in central Damascus, where many government and military institutions are based and where senior officials live.

Sheltered for nearly two years from the destruction ravaging much of the rest of Syria, it has been sucked into violence as rebel forces based to the east of the capital launch mortar attacks and carry out bombings in the center.

Assad has lost control of large areas of northern and eastern Syria, faces a growing challenge in the southern province of Deraa, and is battling rebels in many cities.

But his forces have been waging powerful ground offensives, backed by artillery and air strikes, against rebel-held territory around the capital and near the central city of Homs which links Damascus to the heartland of Assad’s minority Alawite sect in the mountains overlooking the Mediterranean.

As part of that counter-offensive, Assad’s forces probably used chemical weapons, the United States and Britain have said.

However the trans-Atlantic allies, whose 2003 invasion of Iraq to overthrow Saddam Hussein was based in part on flawed intelligence about an Iraqi program of weapons of mass destruction, have been cautious in their accusations.

Despite congressional pressure on Barack Obama to do more to help the rebels, the president has made clear he is in no rush to intervene on the basis of evidence he said was preliminary.