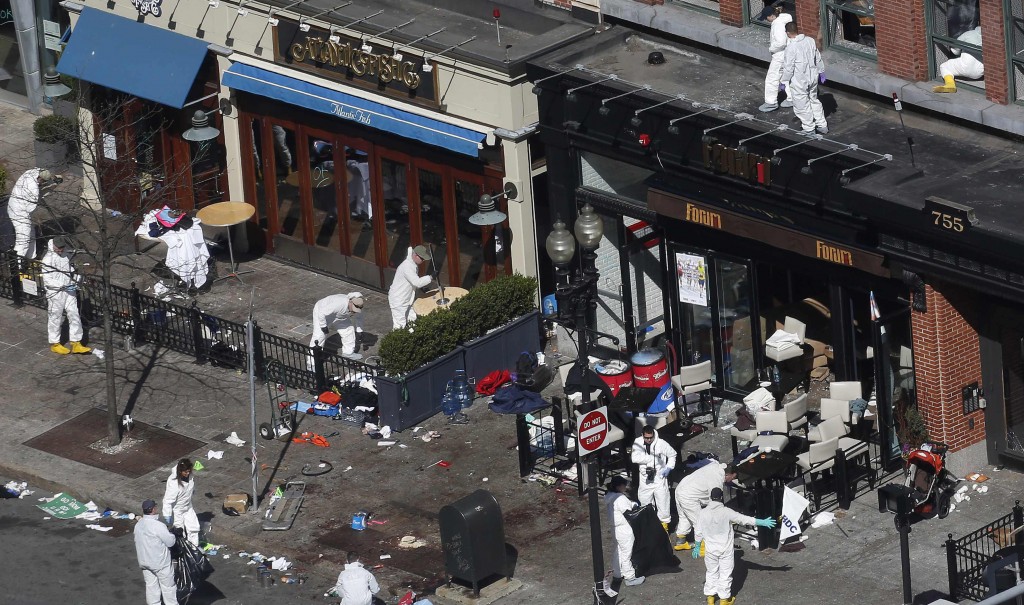 Investigators have spotted a Boston Marathon bombing suspect from security video taken before two blasts ripped through central Boston on Monday, a government official said on Wednesday, in what is potentially the biggest break in the case yet.

City Council President Stephen Murphy said Wednesday investigators saw the image on surveillance footage they got from a nearby department store. He says he doesn’t know if investigators have identified the man.

Murphy says police officers involved in the probe say investigators have matched information from the surveillance footage with witness descriptions of someone leaving the scene.

Murphy says officers are chasing leads that could take them to the man. He says developing that information within the first 48 hours of the probe is a major breakthrough.

The explosions at the Boston Marathon finish line killed three people and injured 176 others in the worst attack on U.S. soil since September 11, 2001.

The bombings, as well as subsequent reports that someone tried to mail the deadly poison ricin to President Barack Obama — the second report of such a letter in two days — have created a climate of uncertainty in the country. Nerves were jolted further by an inaccurate report on cable news network CNN that a bombing suspect had been arrested.

Shortly after CNN retracted its report of an arrest in the case, security officials at Boston’s federal courthouse ordered staff, media and attorneys to evacuate due to a security scare and move at least 100 yards away, according to a Reuters reporter on the scene.

Bomb-sniffing dogs, fire engines and heavily armed and helmeted police arrived at the courthouse, which was reopened to employees an hour later.

The crowded scene along the race course in central Boston on Monday was recorded by surveillance cameras and media outlets, providing investigators with significant video of the area before and after the two blasts.

Investigators were also searching through thousands of pieces of evidence from cellphone pictures to shrapnel pulled from victims’ legs.

Based on the shards of metal, fabric, wires and a battery recovered at the scene, the focus turned to whoever may have placed homemade bombs in pressure cooker pots and taken them in heavy black nylon bags to the finish line of the world-famous race watched by thousands of spectators.

Streets around the bombing site remained closed to traffic and pedestrians on Wednesday, with police continuing their work.

No one had claimed responsibility for the attack.

“Whether it’s homegrown or foreign, we just don’t know yet. And so I’m not going to contribute to any speculation on that,” said Secretary of State John Kerry, who until January was Massachusetts’ senior senator. “It’s just hard to believe that a Patriots’Day holiday, which is normally such time of festivities, turned into bloody mayhem.”

Security officials who spoke on condition of anonymity said instructions for building pressure-cooker bombs similar to the ones used in Boston can be found on the internet and are relatively primitive.

Pressure cookers had also been discovered in numerous foiled attack plots in both the United States and overseas in recent years, including the failed bombing attempt in New York’s Times Square on May 1, 2010, the officials said.