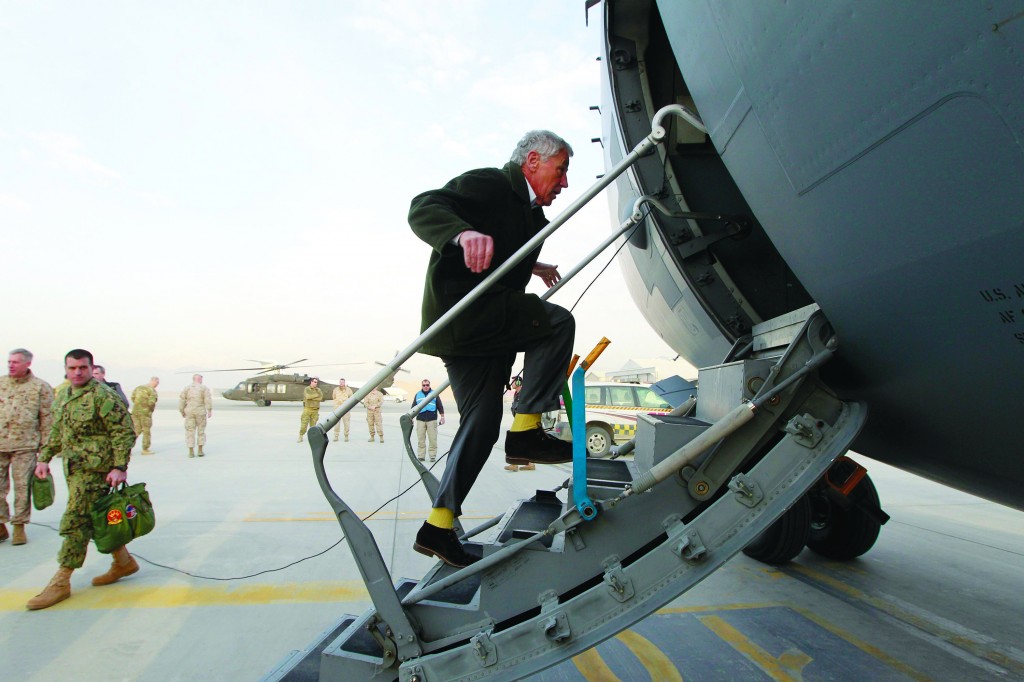 It’s been a rough start for Defense Secretary Chuck Hagel.

After surviving a combative Senate confirmation battle, he jumped on a military plane to Afghanistan and was hit with the jarring difficulties of shutting down a war in a country still wracked by violence and political volatility.

His stay of less than three days in the warzone was riddled with bombings, security threats, political gridlock and wild accusations from an Afghan president bent on securing his own legacy and determined to move his fragile, war-torn country toward stability and self-governance.

Hagel left Afghanistan Monday morning with no real victories to tout, no solutions nailed down or hurdles overcome. Instead, during brief public comments shortly after he met with Afghan President Hamid Karzai Sunday night, Hagel steadfastly avoided any direct talk of the escalating problems. Instead, the twice-wounded Vietnam veteran and former U.S. senator spoke broadly of the challenges of war and the complications of politics.

An early supporter of the war while in the U.S. Senate, Hagel later became more disillusioned with the conflict, opposing the surge of troops sent to quell the escalating violence. More recently he has warned that Americans want the U.S. to get out of the war that has killed more than 2,000 U.S. troops and that the Obama administration wants to wind down.

Hagel must oversee the withdrawal of 34,000 troops and thousands of containers of equipment over the next year or so. And he must do it as the Afghans throw roadblocks in his path and a stubborn insurgency rattles the nascent government with dramatic attacks and the promise of an early start to the spring fighting season.

“It’s complicated,” Hagel repeatedly said as reporters pressed him on the challenges. He appeared at times to try and walk a delicate political line, forced to acknowledge the tensions with Karzai but seemingly determined not to fuel them.

In recent days, disagreements stalled efforts to turn a detention facility over to the Afghans and U.S. forces faced mounting Afghan restrictions on their combat and training operations. A suicide bomber targeted the Afghan defense ministry a day before Hagel was scheduled to go there, and on Sunday he cancelled his news conference because officials said they learned of a security threat.

In addition, Karzai accused the U.S. of colluding with the Taliban.

Both Hagel and Marine Gen. Joseph Dunford, the top U.S. commander in Afghanistan, insisted that the Afghan military leaders are committed to taking over security of their own country and are on target to make that transition later this summer.

There are about 66,000 U.S. troops in Afghanistan, and combat forces are to fully withdraw by the end of next year. U.S. officials have said they are considering leaving a total U.S. and coalition force of between 8,000 and 12,000 in the country after 2014, but President Barack Obama has yet to make a final decision.