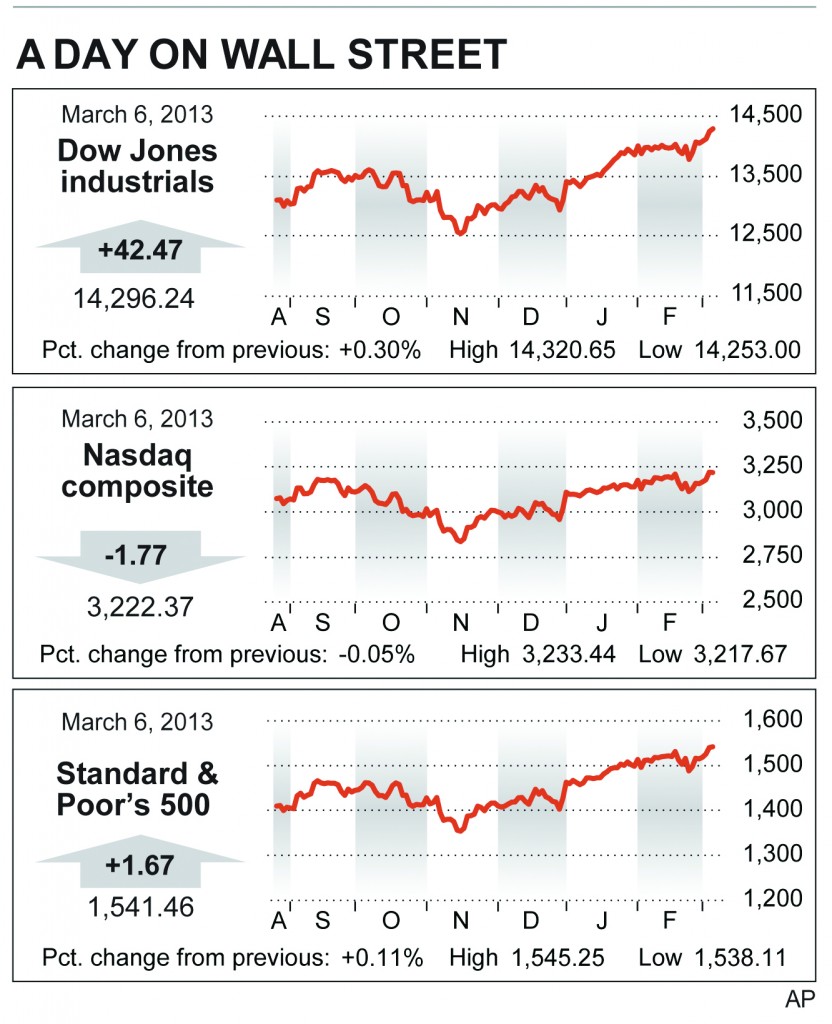 After barreling through a record the day before, the Dow Jones industrial average meandered higher on Wednesday.

The Dow edged up 42.47 points, or 0.3 percent, to close at 14,296.24. An encouraging job-market report helped nudge the stock market up and pushed bond prices lower.

On Tuesday, the Dow blew past the previous all-time high it hit more than five years ago. The index of 30 big corporations has more than doubled since hitting a low during the financial crisis in March 2009.

The question now is, how much longer can it keep climbing?

In the past, stock indexes have often drifted lower in the months after breaking through previous record highs. David Brown, director of Sabrient Systems, an investment research firm, sees plenty of reasons for the market to keep climbing, however. People are putting their cash into the stock market again. And the alternatives, like bonds, are hardly appealing.

“There is literally nowhere else to go,” Brown said. “Do you really want to make 1.9 percent on a 10-year Treasury? You won’t make any money doing that.”

Microsoft led a decline in tech stocks, losing 26 cents to $28.09. European regulators fined the company for breaking an antitrust agreement requiring the software giant to offer computer users a choice of internet browsers, instead of just Internet Explorer.

The ADP survey suggests that government spending cuts have yet to deter employers from hiring. Investors look to the ADP survey as a preview to the closely watched Labor Department report, which comes out Friday. Economists expect the government to say employers added 152,000 jobs in February, lowering the unemployment rate to 7.8 percent from 7.9 percent.

As traders anticipated better news about the job market, bond prices fell and the yield on the 10-year Treasury rose to 1.93 percent from 1.90 percent late Tuesday.

Expectations of a stronger economy tend to lure traders out of Treasurys and into investments that tend to rise with economic growth, like stocks.

Over the long haul, stock markets head higher, but the path is rarely smooth. In October 2007, the Dow hit its previous high of 14,164. A year later, the country was in the middle of a financial crisis and the Dow was in free fall. In January 1987, the Dow closed above 2,000 for the first time, then hit a record of 2,722 in August. Two months later, the Dow had plunged 36 percent from its peak.

That hardly means the market is about to take another plunge. Analysts point to other reasons, besides the poor returns offered by bonds, that the stock market could continue climbing: the economy is slowly recovering, interest rates and inflation are low, and stocks are not especially expensive. The 30 companies in the Dow trade for 15 times their per-share earnings in 2012, in line with their historical average.