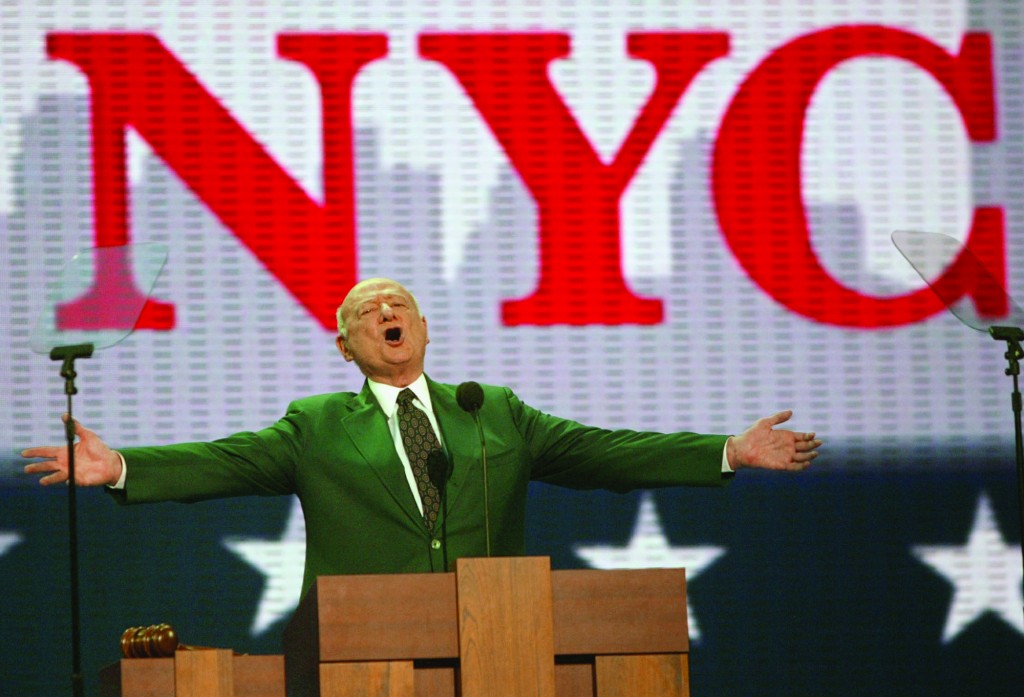 When Ed Koch was mayor, it seemed as if all of New York was being run by a deli counterman. Koch was funny, irritable, opinionated, often rude and prone to yelling.

And it worked, for a while at least.

Koch steered New York back from the brink of financial ruin and infused the city with new energy and optimism in the 1970s and ‘80s while racing around town, startling ordinary New Yorkers by asking, “How’m I doing?” He was usually in too much of a hurry to wait for an answer.

Koch died of congestive heart failure Friday at 88, after carefully arranging to be buried in Manhattan because, as he explained with what sounded like a note wrapped in a zinger: “I don’t want to leave Manhattan, even when I’m gone. This is my home. The thought of having to go to New Jersey was so distressing to me.”

Tributes poured in from political allies and adversaries, some of whom were no doubt thinking more of his earlier years in City Hall, before many black leaders and liberals became fed up with what they felt were racially insensitive and needlessly combative remarks.

During Koch’s three terms from 1978 to 1989, he helped New York climb out of its financial crisis through tough fiscal policies and razor-sharp budget cuts, and subway service improved enormously. To much of the rest of America, the bald, paunchy Koch became the embodiment of the brash, irrepressible New Yorker.

He was quick with a quip or a putdown, and when he got excited or indignant — which was often — his voice became high-pitched. He dismissed his critics as “wackos,” feuded with Donald Trump and fellow former Mayor Rudolph Giuliani (“nasty man”), lambasted the Rev. Jesse Jackson, and once reduced the head of the City Council to tears.

“You punch me, I punch back,” Koch once observed. “I do not believe it’s good for one’s self-respect to be a punching bag.”

Or, as he put it in his best-selling autobiography: “I’m not the type to get ulcers. I give them.”

Koch’s favorite moment as mayor, fittingly, involved yelling. During a transit strike that brought the subways and buses to a halt in 1980, he strode down to the Brooklyn Bridge to boost the spirits of commuters who had to walk to work.

New Yorkers eventually tired of Koch. His latter years in office were marked by scandals involving those around him and rising racial tension. In 1989, he lost a bid for a fourth term to David Dinkins, who became the city’s first black mayor.

On Friday, Dinkins called Koch “a feisty guy who would tell you what he thinks.”

“Ed was a guy to whom I could turn if I wanted a straight answer,” he told Fox 5 News.

Mayor Michael Bloomberg saluted Koch as “a civic savior for our city in desperate times,” saying “the whole city was crumbling” when Koch was elected.

“When we were down, Ed Koch picked us up. When we were worried, he gave us confidence. When someone needed a good kick … he gave it to them — and, if you remember, he enjoyed it,” Bloomberg said.

After leaving office, Koch continued to offer his opinions as a political pundit, food critic and judge on “The People’s Court.” Even in his 80s, he exercised regularly and worked as a lawyer.

Describing himself as “a liberal with sanity,” Koch pursued a fearlessly independent course. When President George W. Bush ran for re-election in 2004, Democrat Koch supported him and spoke at the GOP convention. He also endorsed Bloomberg’s re-election at a time when Bloomberg was a Republican.

Edward Irving Koch was born in the Bronx borough on Dec. 12, 1924, the second of three children of Polish immigrants. During the Depression the family lived in Newark, New Jersey.

The future mayor worked his way through school, checking hats, working behind a delicatessen counter and selling shoes. He attended City College of New York and served as a combat infantryman in Europe during World War II.

He received a law degree from New York University in 1948 and began his political career in Greenwich Village as a liberal Democratic reformer, beating the powerful old-school party boss Carmine DeSapio in a race for district leader.

Koch was elected to the City Council and then to Congress, serving from 1969 to 1977 as the representative from a wealthy East Side district.

His politics edged to the center of the political spectrum during his years in Congress and pulled to the right on a number of issues after he became mayor.

With New York in dire financial condition in 1977, Koch defeated Mayor Abe Beame and Cuomo in the Democratic primary to win his first term in City Hall. He breezed to re-election in 1981 and 1985, winning an unprecedented three-quarters of the votes cast.

In 1982, he made a run for governor against then-Lt. Gov. Cuomo. But his bid blew up after he mouthed off about life outside the big city.

“Have you ever lived in the suburbs?” Koch told an interviewer about a possible move to Albany. It’s nothing. It’s wasting your life.” He said life in the country meant having to “drive 20 miles to buy a gingham dress or a Sears, Roebuck suit.”

It cost him the race.

Koch’s third term was beset by corruption scandals, one of which ended in the suicide of a top party boss in 1986. He fell out with many black voters for purging anti-poverty programs and saying, among other things, that busing and racial quotas had done more to divide the races than to achieve integration. He also said Jews would be “crazy” to vote for Jackson during the civil rights leader’s 1988 presidential campaign.

Racial tensions were running high at the time because of the deaths of two young black men who were set upon by gangs of whites in 1986 and 1989.

Koch later said the simmering tensions didn’t lead to his defeat. “I was defeated because of longevity,” he said. “People get tired of you. So they decided to throw me out.”

But he also said his biggest regret as he left office was that “many people in the black community do not perceive that I was their friend.”

On Friday, Jackson said in a statement that Koch’s “leadership and legacy will never be forgotten in New York City, New York state or our nation.”

Koch was a published author and was survived by his sister, Pat Thaler, and many grandnieces and grandnephews.