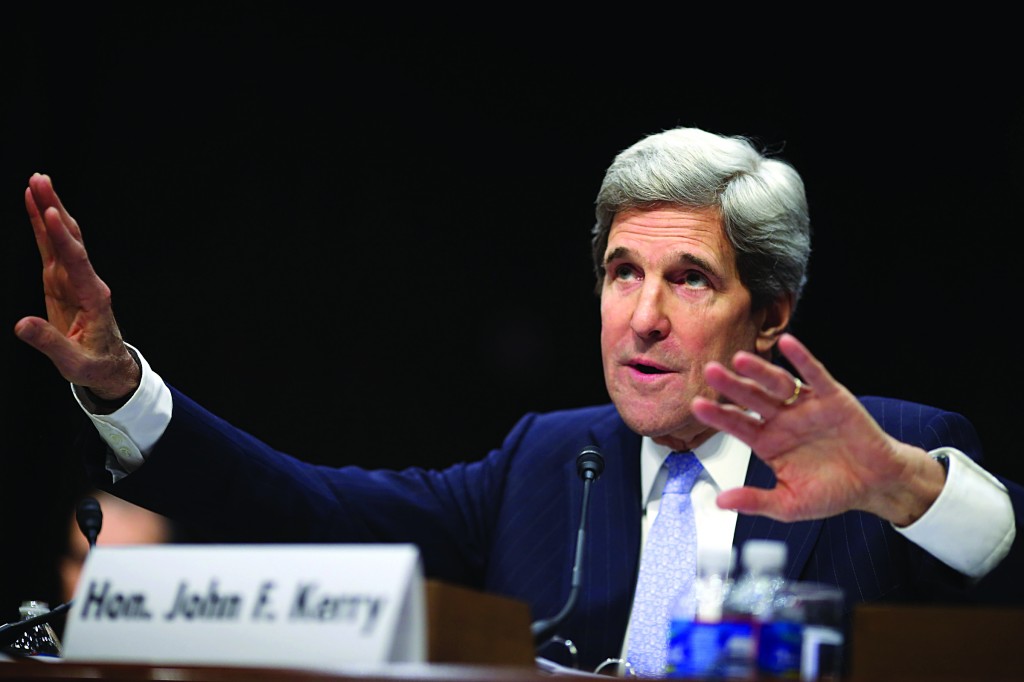 Sen. John Kerry, President Barack Obama’s nominee for secretary of state, collected pledges of support Thursday and testified at his confirmation hearing that U.S. foreign policy should be defined by a helping hand as well as military strength.

The Massachusetts Democrat discussed Iran, Syria, climate change and a variety of issues with members of the Foreign Relations Committee at a hearing that recalled an unusual American life; Kerry is the son of a diplomat, a Navy lieutenant who volunteered for Vietnam, an anti-war protester, a five-term senator, an unsuccessful nominee for president, and Obama’s unofficial envoy.

The nearly four-hour hearing also provided an odd juxtaposition as Kerry, a member of the panel for 28 years and its chairman for the last four, sat alone in the witness chair. At one point, Sen. Bob Menendez (D-N.J.), the incoming chairman who presided, mistakenly referred to Kerry as “Mr. Secretary.”

The current secretary, Hillary Rodham Clinton, introduced Kerry, calling him “the right choice.” She is stepping down after four years.

The committee is expected to approve Kerry’s nomination early next week, and a full Senate vote could occur before the month is out.

Kerry spoke out strongly for dealing with climate change, providing food and energy security and humanitarian assistance. He also spoke of robust foreign aid, but he insisted that the country must get its fiscal house in order to lead in the world.

Faced with Iran’s nuclear program, Kerry said the United States will do what it must to prevent Tehran from obtaining a nuclear weapon, but he also signaled that diplomacy remains a viable option.

“I repeat here today, our policy is not containment. It is prevention, and the clock is ticking on our efforts to secure responsible compliance,” he said.

The senator said he was hopeful that the U.S. and other nations could make progress on the diplomatic front, but that Tehran needs to relent and agree to intrusive inspections.

“If their program is peaceful, they can prove it,” he said.

In an unexpected exchange, Kerry found himself defending Obama’s choice of Republican Chuck Hagel to be the next defense secretary against GOP criticism.

On Syria, Kerry was asked about his outreach to President Bashar Assad, now an international pariah after months of civil war and unending violence against his citizens.

Kerry said there was a moment where Syria reached out to the West but that it has long passed.

“History caught up to us. That never happened. And it’s now moot, because he has made a set of judgments that are inexcusable, that are reprehensible, and I think is not long for remaining as the head of state in Syria,” the senator said. “I think the time is ticking.”

The job of the nation’s top diplomat would be the realization of a dream for the 69-year-old Kerry, whom Obama passed over in 2008 when he chose Clinton. When Joe Biden became vice president, Kerry replaced the former Delaware senator as chairman of the committee.