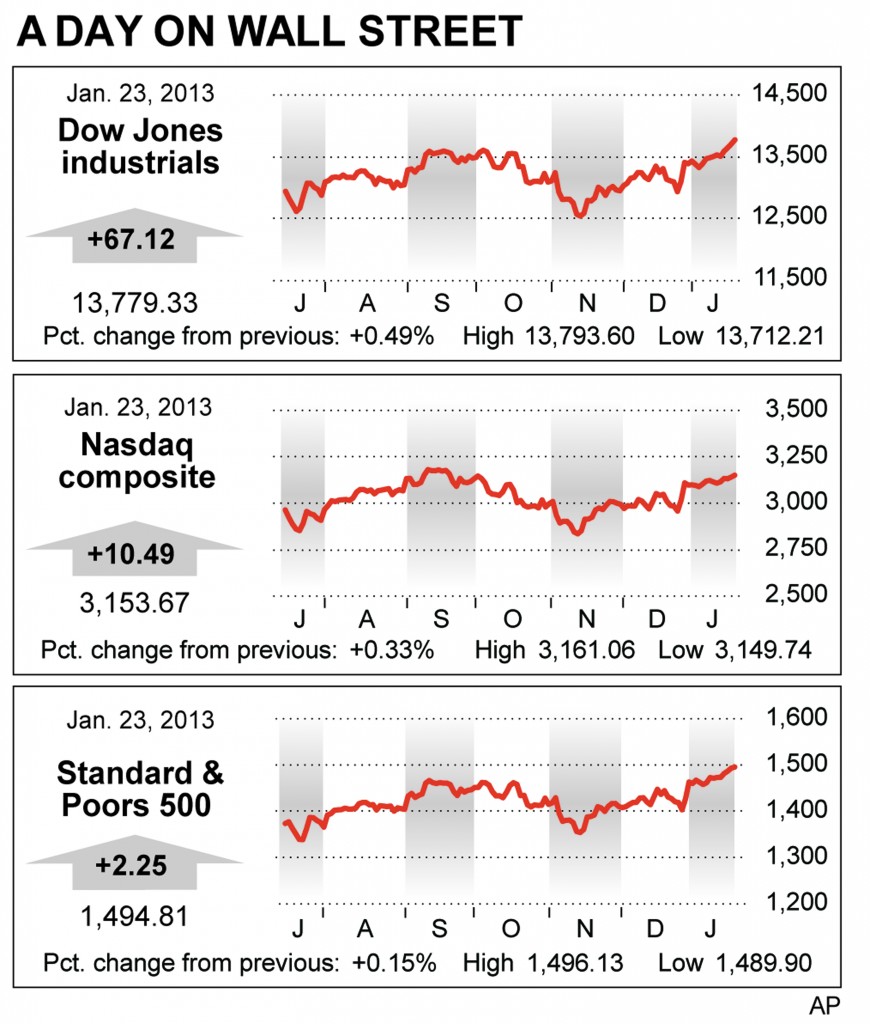 Strong earnings from tech giants nudged the stock market to a five-year high Wednesday. Investors drew encouragement from a vote by the House of Representatives to let the government keep paying all of its bills for another four months.

IBM’s results beat expectations, thanks to its lucrative internet-based “cloud computing” business and sales of software services to Brazil, Russia and other developing countries. The company also raised its earnings outlook for the current year. IBM led the Dow’s 30 stocks, rising $8.64 to $204.72.

Without IBM’s 4 percent gain, the Dow would have been nearly flat.

The stock market has climbed so quickly this month that it will likely take more than good earnings to keep it heading higher. “This market is really stretched,” said Clark Yingst, chief market analyst at the securities firm Joseph Gunnar. “We’ve essentially gone straight up since January 2. There’s certainly room for people to take profits.”

The S&P 500 index is already up 4.8 percent in 2013. That’s more than half of what most stock-fund investors hope to make in a single year.

Google gained 6 percent after its earnings climbed at the end of last year as online advertisers spent more money in pursuit of year-end shoppers. Google rose $38.63 to $741.50.

Another tech giant, Apple, fell in after-hours trading after reporting sales that fell short of forecasts.

Slumping coal shipments have been a drag on railroad operators, but CSX and Norfolk Southern posted better revenue and profits than expected. The railroads managed to offset some of the hit from falling coal demand by getting more money from carrying car parts, building materials and other products.

The quarterly earnings season is off to a strong start. Of the 83 companies in the S&P 500 that reported through Tuesday, 54 have beaten Wall Street’s estimates, according to S&P Capital IQ.

In the bond market, the yield on the benchmark 10-year Treasury note dipped to 1.83 percent from 1.84 percent late Tuesday.

Among other companies posting quarterly earnings: