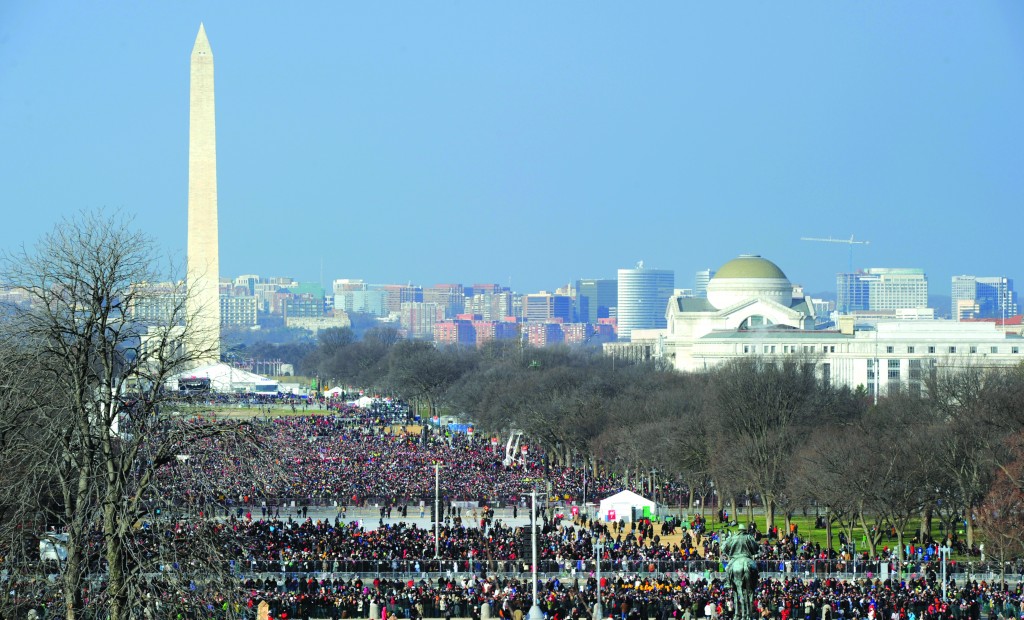 Early Monday morning, I joined the crowds of a few hundred thousand people who thronged the streets of downtown Washington, D.C., braving the cold temperatures and forecasts of possible snow to participate in the 57th presidential inauguration of a president of the United States of America.

Security was tight and most of the streets surrounding the Capitol Building were closed to traffic; Washington’s Metro worked for weeks in advance to accommodate the extra-large crowds that would be traveling the trains to reach the inauguration ceremonies.

The celebration was held on the grounds of the Capitol Building, and most participants stood for hours while observing the ceremonies on large video screens that were strategically placed throughout the entire area.

Preparations for the event began months in advance, as complex logistics and security were put in place. For the first time in history, information was available to those traveling to the inauguration, complete with GPS technology to help them navigate to their destinations. Updates with information on Metro accessibility and other relevant details were also available.

The Government Printing Office printed 250,000 color-coded tickets containing multiple security features to protect against counterfeiting. Every person attending the inaugural ceremonies on Capitol grounds is required to have a ticket, including children. Separate areas further from the Capitol were designated for non-ticket holders.

U.S. Senator Charles E. Schumer, Chairman of the Joint Congressional Committee on Inaugural Ceremonies, commented, “These state-of-the-art tickets will keep counterfeiters out, and ensure that all ticket holders know exactly how to get to their designated spot to enjoy this year’s inaugural ceremonies. … These tickets and this new site are a big part of our efforts to make sure these ceremonies are safe and enjoyable for everyone who attends.”

According to the Constitution, Inauguration Day must take place on January 20. However, there have been seven times in United States history that January 20 was on Sunday, the first time being in 1821, with the inauguration of President James Monroe. At that time, after consulting with the Supreme Court and other government leaders, the decision was made to hold the ceremonies on Monday.

In 1877, with the inauguration of Rutherford B. Hayes on Monday, January 21, a private swearing-in ceremony was held on Sunday, January 20, to officially inaugurate the president on the proper day. This protocol has been followed ever since.

In addition, January 21, 2013 was Martin Luther King, Jr. Day, the second time that this federal holiday has coincided with a presidential inauguration. The first was President Bill Clinton’s second inauguration in 1997.

Loyal Democrats gathered from across the country to attend the inauguration, traveling from as far away as Alaska to participate in the celebrations. A man from Texas reported that he traveled in a specially chartered plane, together with 180 others including his congressman. However, he emphasized that most Texans are against Obama; after the elections, he was warned not to wear his “Obama shirt” in public.

Most participants were ardent supporters of President Obama, as was obvious by the cheers, enthusiastic responses to his words, and the chants of “Obama, Obama, Obama,” that filled the air. Others simply came to participate in the festivities as loyal Americans. I approached one couple from Virginia and inquired, “You came to show support to Obama?”

“We came to participate in the inauguration,” was the response.

“Actually, we came to protest,” he added, half-jokingly.

One individual was determined to make his protests loud and clear. An elderly man  caught the crowd’s attention as he climbed a high tree overlooking the crowd, bearing a sign protesting Obama’s stance on social issues.

As the police attempted to reach him with a ladder, he climbed precariously higher in the tree, beyond reach of the police. He remained there for hours, distracting the crowd from the festivities, even yelling out against Obama during the inauguration speech.

The general atmosphere on the Capitol grounds was festive, yet formal and dignified, as the United States Marine Band played musical selections and heralded the arrival of dignitaries with trumpets.

Many dignitaries, including former presidents Jimmy Carter and Bill Clinton, were greeted by the cheering of the crowd. However, not all dignitaries were worthy of the crowd’s loyalties. Die-hard Republicans Newt Gingrich and Tom Boehner were greeted with boos.

Optimism and enthusiasm filled the air as first Vice President Biden and then President Obama took the oath of office.

The theme of this year’s inauguration was “Faith in America’s Future.” Both Charles Schumer, New York State Senator and Chairman of the Inaugural Ceremonies, and President Obama himself, in his extremely liberal address, imbued the crowd with confidence in America’s ability to provide a safe and secure country for future generations.