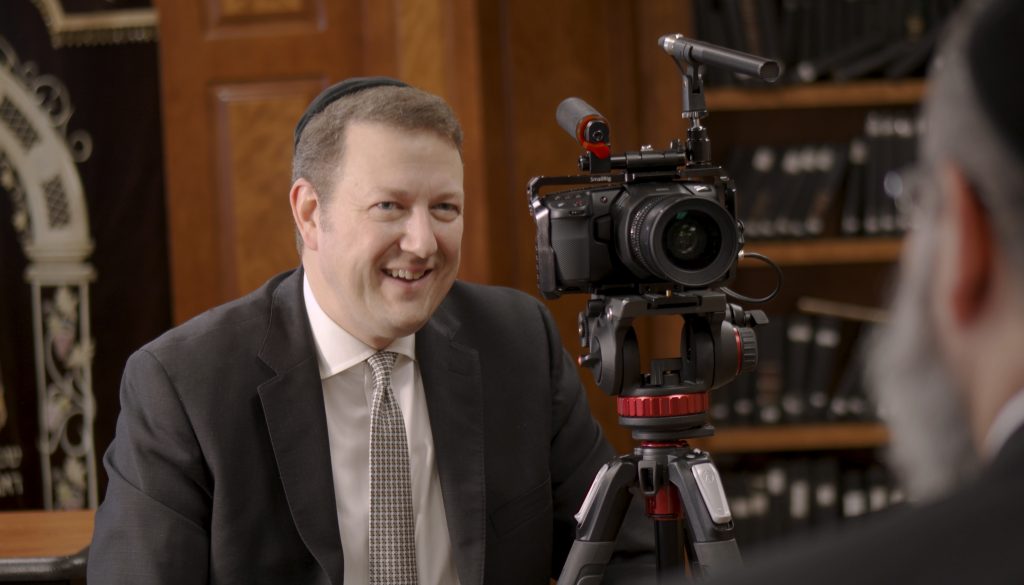 In this new column, Hamodia will speak each week with the representative of a different industry, to discuss the effects of the coronavirus on their business.

This week Hamodia speaks with Chananya Kramer, President and CEO of Kolrom, a national multimedia company based in Baltimore, which he founded 21 years ago.

Hopeful, Even in Devastation

Tell us a little about your company.

We create video and animation presentations.

For example, we did all the films for the last two Siyumei HaShas. We don’t film actual events, but we create the films that are shown at events. So, all those pre-produced videos you watched at the Siyum were ours.

When you go to a dinner for a yeshivah or other organization, and you see video clips, like interviews with honored guests, etc., many times you’re watching our work.

How many people work for you?

There are seven people who work for me full-time — video editors and animators — and many more people are brought in on a per-project basis.

What sort of animation projects do you do?

Every video now has elements of animation. Every time you see a logo, you’re also seeing animation. If you’re talking about a full-blown cartoon, we made a film called Megillas Lester a few years ago, as a full-length animated feature.

We also do a lot of smaller animated films, like explainer videos for organizations, “how-to” videos, whiteboard animations and many more.

How have you been affected by the coronavirus pandemic?

“Affected” is a nice way to say it — “devastated” is a more accurate term! I don’t want to sound doom and gloom, but k’heref ayin, everything disappeared. Our business is built on people needing videos to show at their events and campaigns. And all of that, all at once, just disappeared. Anyone who was planning to do an event, a dinner, a campaign, put it on indefinite hold.

I had four yeshivah dinners in March that all got canceled. Other organizations that had scheduled dinners for the spring have also canceled.

At the time those four cancellations were announced, had you already done some prep work?

The work for those four dinners had all been completed. The cancellations were announced just days before the dinners were to be held. I had a whole bunch of other ones that we were about to start after Purim, but we had to suspend production.

Will you be paid for those four that you had already completed?

Each of those mosdos has been amazing. They’re all paying — ashrei Yisrael, it’s gevaldig. I have had no machlokesen with anybody. Baruch Hashem, they’ve all been very, very gracious.

That’s correct. Going into Pesach, I had absolutely zero prospects for work.

Has that changed by now?

Yes. Now that the dust is beginning to settle, although no one is doing dinners, everyone has to adapt. That’s going to be the challenge, and I have to retool my own business to adapt to what the new normal is.

Right now, the phone is ringing off the hook about virtual dinners and other virtual events, how can we actually do a proper event to make people feel like there’s something special, from their home, without attending a large venue? It’s not simple, but we’re working creatively to come up with solutions, both on the technology and on the creative side.

So the new frontier is virtual dinners.

And another thing I’ve realized over the past two months is that everybody has been doing things for free, myself included — nobody’s going to try to exploit this situation. Any time people needed videos, like Rabbanim giving chizuk shmuessen, I have been filming every day. We haven’t been making money, but we’ve been able to help, and I’m happy to have done it. Many speakers and Rabbanim, people who typically may charge for their services, were not charging, because it was an eis tzarah for Klal Yisrael.

But when you climb out of that, everyone needs to kind of recalibrate about the parnassah aspect of it all. And whereas previously I would charge a certain amount of money for production, now people have been getting the service for free, and it’s a challenge for people to get used to the idea of paying for things again.

What effect has the pandemic had on your staff?

Baruch Hashem they’re all very good people and recognize the matzav. It’s been very, very tough. Everybody had to be let go. As the projects are starting to trickle in, we’re figuring it out.

I’m going to regroup and rehire them all, im yirtzeh Hashem, but right now there’s nothing going on.

We figured that rather than taking these forgivable government loans, it was best to furlough everyone, and let them get the government unemployment checks, which are far higher than usual.

Realistically, the economy may start opening a little by the middle or end of May, but it won’t be fully up and running for a few months. Do you think that these dinners that were scheduled for the spring and summer may just be rescheduled for September; or are they going to be canceled or done on video?

It’s hard to say. Even if the economy opens up, we have no idea how far social distancing is going to continue — both legally and just culturally, if we just are uncomfortable making large events in big venues.

I can see a scenario that there’s going to be a shift away from these things. I hope not — I hope the dinners will go right back to where they were! But I have to brace myself for the reality that we may have a post-corona world, and a lot of organizations’ executive directors may welcome that. Dinners are a drain on a mosad; they’re expensive, and it’s really hard for them. If they can figure out another mehalech and there’s something else that becomes acceptable, I think they may be happy to pursue that. Who knows?

Right, even when the pandemic is completely over, when the economy is normal and social distancing is totally gone, people may have just gotten used to having something a certain way. For example, maybe people will start realizing that you can have a nice, small wedding in your backyard that doesn’t cost tens of thousands of dollars. So, what do you feel may change permanently in your industry, even when the coronavirus is gone?

Your example about the weddings is excellent. In my world, I think you’re going to find that the people who were looking for top-tier production quality are still going to need it. But the lower tiers may ask themselves, “I was communicating with videos just fine using my personal Zoom camera — do I need to now pay somebody thousands of dollars for production?” I believe that there will be a part of Klal Yisrael that’s going to feel that way. I’m not telling them that they’re wrong.

So in the same way that the new normal may be that a Rebbi who can’t get to school because of a snowstorm may say, “I was teaching from home for weeks during the coronavirus pandemic, so why can’t I do it on the snow day?” I think that we’re going to have different levels of what we think is normal. In my industry, there have been certain expectations in terms of production value that may change.

Are you going to be able to adapt to that, like maybe by making a cheaper video?

I would say I’m going to diversify the services I’m going to provide in order to be able to adapt to new technologies.

As soon as corona hit, I went out and purchased every piece of livestreaming equipment I could, because I recognized that that’s where I need to go. And that equipment instantly went out of stock at B&H. I spent thousands of dollars on proper equipment to be able to broadcast and not have to go on location.

If these dinners become Zoom dinners, would they need fewer videos?

We imagine they’ll need to have some level of video; the question is, are they going make them themselves, or are they going to hire a professional to shoot it? But they’re going to need some kind of video about their organization and about the evening, maybe to a lesser degree than they would have at a fancy hall.

On the other hand, they’re going to need technical support on the livestream. There are going to be all these feeds coming into my office, and there will be graphic overlays. Yeah, that’s a whole other melachah, doing livestreaming.