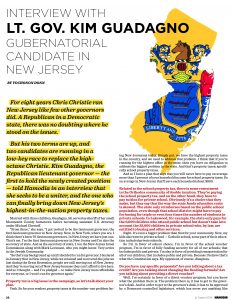 For eight years Chris Christie ran New Jersey like few other governors did. A Republican in a Democratic state, there was no doubting where he stood on the issues.

But his two terms are up, and two candidates are running in a low-key race to replace the high-octane Christie. Kim Guadagno, the Republican lieutenant governor — the first to hold the newly created position — told Hamodia in an interview that she seeks to be a uniter, and the one who can finally bring down New Jersey’s highest-in-the-nation property taxes.

Property tax is a big issue in the campaign, so let’s talk about your plan.

And so I have a plan that says that you will never have to pay on average more than 5 percent of your household income for school property taxes. So on average in New Jersey that’ll save each household about $800.

Related to the school property tax, there is some resentment in the Orthodox community of double taxation. They’re paying the school property tax, and on the other hand, they have to pay tuition for private school. Obviously it’s a choice that they make, but they say that the way the state funds education costs is skewed. The state only reimburses based on the public school population, even though that school district might have to pay for busing for triple or even four times the number of students in private schools. In Lakewood, for example, the state only pays for the 6,000 children who attend public school but doesn’t take into account the 33,000 children in private school who, by law, are entitled to busing and other services.

Right. It’s even a bigger problem than that for your community. Now, my kids also went to private school — Catholic school; some part of their education included private schools.

Every year we put pilot programs in the legislature, and every year the legislature doesn’t get it to the governor’s desk. So, realistically, the way to fix that problem beyond changing the legislature is to reevaluate the school funding formula and make it thorough and efficient for every child in New Jersey.

And that would be the second piece of our program when it comes to school property taxes. First we do the 5 percent cap, and next we need to go back and look at the school funding formula that has not been reevaluated in 30 years.

Do you expect less resistance to that than when Governor Christie tried to change the formula, tweak a little bit, a few months ago?

Well, I expect resistance to that, of course, but I believe that once you start to talk about being fair, and when you show that the children are not getting equal services, then, yes, there’s going to be a lawsuit, but that’s OK, I’m a lawyer. I’ve been sued before, I’ll be sued again. If you stand up for what you believe in, you’re not afraid of a lawsuit.

What we should be doing right now together is making a record to show that children in New Jersey need a new school funding formula that’s fair to everybody. And that’s part of, really, my plan to audit New Jersey. Let’s find out where we could be giving more services and … better services to everyone.

So we’ll keep fighting that good fight, and I believe that if you get a Republican governor in there, myself, we have a good chance of convincing people — good-hearted people — that we need to take another look at the program overall. People understand it’s not fair to the children, and I choose to believe that people care more about the children than they do about their special interests.

A related issue. There’s recently been a growth in anti-Semitism in New Jersey. You have it on an official level — Mahwah banning the eruv, Jackson passing a no-knocking bill. Both of these are widely seen as targeting Orthodox communities, saying we don’t want you here. There’s been vandalisms, attacks. You don’t hear any official condemnation of it.

Oh, you hear it from me all the time. We have to be ever-vigilant. We have the most strict anti-bullying laws in the country, or one of the most, and we need to be sure that there is zero tolerance for any kind of discrimination on any level in any community. And if those laws are designed to be discriminatory, they should be banned, period.

And, you know, one of the biggest calling cards we have in New Jersey when it comes to creating businesses is we’re very, very open-minded, and we’re very culturally diverse and we’re just one of the most diverse states in this country, and that is a calling card for business. That’s why we have such a big Orthodox Jewish population, quite frankly, because we are so open-minded. And when those — I hope isolated — offensive behaviors occur, I, as a former federal prosecutor and as a state prosecutor, will, of course, aggressively pursue whoever those offenders are, immediately.

Let’s talk about New Jersey Care. Governor Christie has expanded it the past couple of years. What plans do you have in relation to that?

A couple years ago, as you know, the governor got the Medicaid waiver and added the Affordable Care Act, added 530,000 to the insurance rolls. And you know now, also, there’s a huge debate in Washington over what happens next.

My position is this: we need to come up with a solution that covers preexisting conditions, allows people to pick their own doctors — especially in your community — and also is affordable. We cannot pull the rug out from [under] 530,000 people who thought they had insurance and now may not. To me, those are the three overarching principles when it comes to fixing the Affordable Care Act or replacing it.

There’s been an assisted suicide bill that’s been winding its way through Trenton the past few years. Where do you stand on it — on the bill the way it currently stands?

I wish I could answer that question. If you send it to me, there’s several different versions of the bill, as I understand it. One was presented by Assemblyman Burzichelli. You know, I’d listen to a little bit of the testimony, and if the reason why we need an assisted suicide bill is because it’s just too inconvenient for family members to take care of our aging adult family members, then that’s not acceptable.

I have two parents who both went through long, painful cancer, and then ultimate hospice, and died. And I was the adult who was responsible for managing all of that care, and that’s my job as a child — as an adult child — to take care of my parents when they’re too old to take care of themselves. I think that’s our obligation.

Do you have any issue that as governor of New Jersey you will want to use the bully pulpit of the office to push; an overarching message or something outside the regular humdrum of politics, maybe on the national stage or across the state?

Well, I certainly don’t care about the national stage, except as it impacts New Jersey. Right now, my focus is on making sure New Jersey is affordable for all of us so that our children and our grandchildren can stay here.

You know, it’s a beautiful state. You go up north and it has, what I call, mountains; what people from Colorado would call hills. But if you go down south, we have expansive, beautiful beaches. And in between, there’s every kind of community, there’s every kind of environment that you could possibly want. I don’t want to live anyplace else. I quite frankly don’t want to move to Florida when I’m too old to remember how to drive a car. I want to stay here.

So that’s my focus right now. Nothing earth- shattering. I think people in New Jersey are ready for a uniter, not a divider. I think people are looking for open, honest, thoughtful, respectful, authentic — I don’t want to say conversations, I want to say more discussion over the problems so that we can finally fix some of those problems, and that’s what I’m looking forward to do as governor of New Jersey.

The past couple of days has seen a big shift in Democratic leadership, the center taking control away from the north. What would your relationship be with this new political structure?

The goal and the responsibility of a governor is to get things done. I’ve worked in a bipartisan way for the last eight years. As a head of the Red Tape Commission I had two Republicans, two Democrats. Businesses and people who call me don’t first say, I’m a Republican, they don’t first say I’m a Democrat. What they first say is, can you help me? And that’s my attitude. And I know it’s a very different way of doing things, but you know, I find if you don’t care who gets the credit, you get a lot more work done. And that’s the way I’m going to govern. Bring people in, talk to them.

New Jersey has been known, at least outside the state, for two things: low gas prices and for their exits. Now the low gas prices have been taken away, so what’s left?

(Laughs) 105 on the Parkway. That’s where I live. So you know, right now, we have to work very hard to make sure that increase in gas tax — I opposed the increase in the gas tax for any number of reasons we won’t go over right now. But it’s in place. It needs to stay; it needs to be nonpolitical. We have to take all of the politics out of infrastructure.

Right now, the way the legislation is written, four people in the legislature decide who gets the money. I think that is just the worst public policy that we could ever have passed in New Jersey. And what we need to do is come up with an infrastructure that is nonpolitical, and that’s not that hard. Just call the experts in and have objective, evidence-based infrastructure build out.

Do you have a final message to readers?

This year it should not be Republican or Democrat or independent. Take a very, very close look at what each candidate says. And quite frankly, this is how it looks: you can vote for a Goldman Sachs millionaire who’s promised to raise your taxes, or you can vote for a working mom who’s created jobs in New Jersey, has experience doing that, who’s promised to lower your taxes or not run again. That’s a pretty clear choice. People need to vote their pocketbooks this year. And if they do that, then I will be the governor-elect in November, and we’ll work very, very hard to make New Jersey affordable for everyone over the next four years.