Prime Who Are the Black Hebrew Israelites? 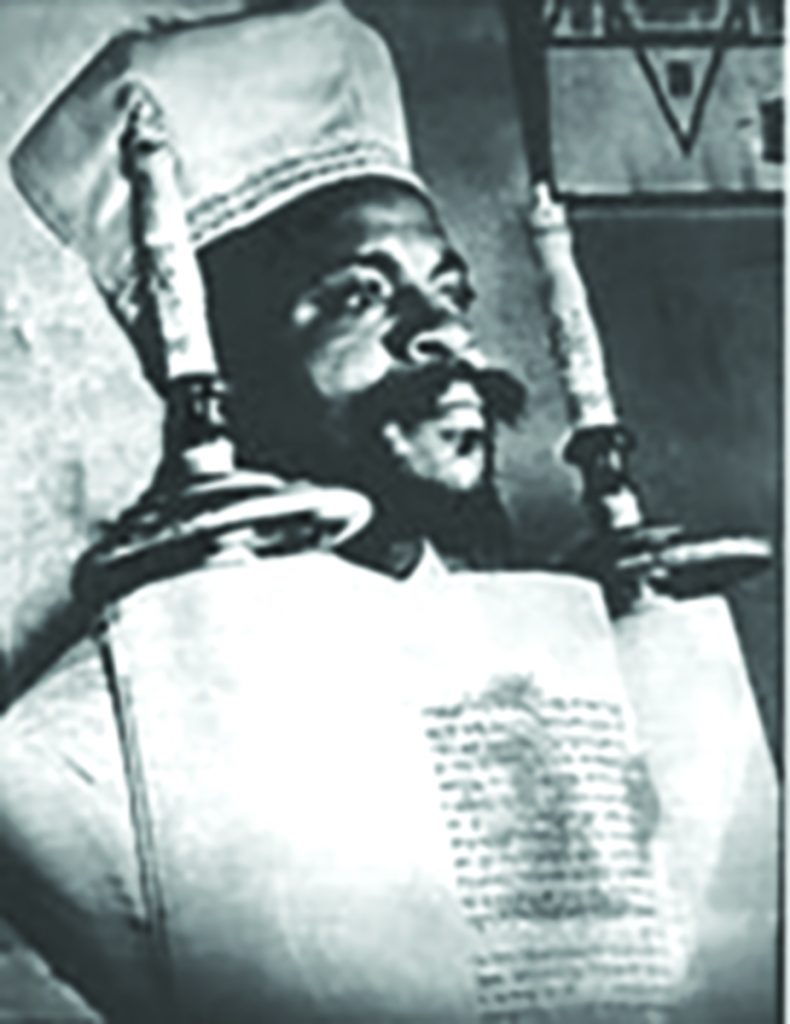 For most New Yorkers, the term “Black Hebrew Israelites” conjures up images of militant preachers dressed in pseudo-Biblical clothing, brandishing posters of anti-Semitic imagery, shouting about some wild conspiracy theory that has to do with whites or Jews controlling the universe. Some people find the group and its posturings offensive, others find it amusing; most, in typical New York style, ignore them and keep walking.

The enigmatic group recently found itself the focus of attention for their connection to the killings in Jersey City. While information on the motivation of perpetrators David N. Anderson and Francine Graham slowly trickled out in the days following the attack, in less than 24 hours their connection to the Black Israelites and their online posts of anti-Semitic and anti-police rhetoric had circulated widely.

News reports during the three-hour-long shootout last Tuesday afternoon mostly described the attack as criminal activity gone wrong. Yet, review of surveillance footage and recovery of a large cache of high-powered weapons showed otherwise. By evening, officials confirmed that the attack had deliberately targeted the kosher grocery store. While hatred of Jews seemed to be an obvious motivation for the crime from early on, the role of the pair’s religious affiliation remained unclear.

A New York Times article quoted a neighbor of Graham’s in Elizabeth, New Jersey, who said she recalled hearing her and Anderson “shouting at night that his religion was the only true religion, while others — specifically Catholicism and Judaism — were false.” A day after the shooting took place, FBI agents raided a Black Israelite church in Harlem known for its association with virulent anti-Semitic and anti-white ideologies.

According to a report by NBC, this past May, Anderson, responding to an online story about attacks on Jews in Brooklyn, said that blacks are “not violent enough” and encouraged additional physical attacks on Jews. In August, he posted a comment blaming the shooting death of a black man killed by police on a conspiracy of government control by Jews.

The terrifying nature of the attack has left Jews and others groping to understand more about what drove these two killers and has prompted many to take a harder look at Black Israelites.

A Fringe of a Fringe

Estimates put the total number of adherents worldwide somewhere between 25,000 and 40,000; this small group has many branches with divergent theologies. While most accept the movement’s core belief that blacks are the “true Jews,” the vast majority do not share the militant black supremacist philosophy and anti-Semitism of the curbside preachers, and malice toward other groups is not a formal part of their theology.

One of the group’s most prominent institutions, Beth Shalom B’nai Zaken Ethiopian Hebrew Congregation in Chicago, enjoys friendly relations with the local Jewish community. It is led by Capers Funnye, a cousin of former first lady Michelle Obama.

The Black Hebrew Israelites of Jerusalem, who number between 2,000 and 2,500, also have their roots in Chicago, but in the early 1970s, they relocated en masse to the southern Israeli city of Dimona. Their leader, the late Ben Ammi Ben-Israel (born Ben Carter) had several clashes with Jews and faced accusations of anti-Semitism for years after his immigration; however, the group has moderated its stance and has since become accepted as a part of Israeli society.

Dimona’s Chief Rabbi Yitzchak Elefant has had friendly dealings with the Black Israelites in his city. He has helped them to improve housing conditions in their self-contained village and currently grants kashrus certification to a line of vegan products that some of the group’s members produce.

Rabbi Elefant told Hamodia that he was not aware of the Dimona community remaining connected to other more extreme groups in America.

“While they call themselves black Hebrews, I have never heard any of them express any connection to these other groups,” he said. “Most of these people are Israeli citizens, and are loyal to the State. Some of their children serve in the IDF.”

This rosy picture is not universal, however.

Three Black Israelite branches — in Miami, northern Pennsylvania, and Harlem (the site of the recent FBI raid) — have been widely labeled as “hate groups” for their demonization of whites and Jewish people in particular. Yet, offensive comments and bellicose public sermons aside, none of these groups or their members have been linked to ideologically motivated violence in the past.

Evolution of a Movement

The Black Hebrew movement first began to take root in the late 19th century, when a handful of charismatic leaders started to preach that the recently freed American slaves were actually descendants of the 12 tribes of Israel. William Saunders Crowdy was one of several preachers who claimed that this fact had been revealed to him in a vision.

Each of the leaders from this period founded churches that incorporated Hebrew prayers and some versions of Jewish traditions into their largely Christian beliefs and worship services.

One early figure, Frank Cherry, who founded a “Black Jew” church in 1886 in Tennessee, taught himself a working knowledge of Hebrew and Yiddish, forbade the consumption of non-kosher animals, and claimed adherence to Jewish law. He also taught that many major figures from both the Torah and the Christian bible were black. Some leaders identified themselves as “rabbi.” Others took on titles such as “prophet” or “high priest” and taking names based in adaptations of Hebrew. They also introduced clerical garb they thought was reminiscent of biblical times.

However, even at this early stage, militant ideology became part of the movement. Cherry often preached that Jews are illegitimate claimants to “chosen” peoplehood; that they had stolen this distinction from blacks.

A second wave of the movement sprouted during the “Harlem Renaissance” of the 1920s when a new set of black artists, writers, and performers gained prominence, basing themselves in the upper Manhattan neighborhood after which the period is named. At the same time, Wentworth Arthur Matthew founded an urban Black Hebrew congregation in Harlem and created his own blend of theologies, including Free Masonry and quasi-Kabbalah. His congregation officially observed kashrus and Shabbos, and it maintained friendly relations with many in the Jewish community.

“[Matthew] did a lot of cutting and pasting to make a kind of Black Judaism, but they basically followed what we think of as Torah Judaism and called themselves Jews,” Jacob Dorman, an associate professor of history at the University of Nevada and author of a book on the history of Black Israelites told Hamodia.

Matthew went on to found a seminary that trained a new generation of “rabbis” to lead his brand of the movement.

Professor Dorman said that the movement took its radical turn in the 1960s and ’70s against a backdrop of racial upheaval.

“A lot of these innovations came out of the Black Power movement,” he said. “Amid the chaos of urban rebellion and a collapse in race relations came a militarist and nationalist version, and one of its main features was a lot of hostility towards white Jews. It became popular among the youth and remained very viable, though I still do not think it’s the majority.”

It was during this period that the term “black Jew” was exchanged for “black Israelite” in an effort to distance the movement from Jewish people, who were increasingly cast as an archenemy.

One of the most tension filled racial conflicts of that period in New York City was the teacher’s strike of 1968, sparked by the actions of a community school board experiment in Ocean Hill-Brownsville, Brooklyn, which fired 19 teachers in its district, many of them Jewish. In the midst of the crisis, which was a low for black-Jewish relations, one teacher read a virulently anti-Semitic poem on the radio, written by a black student. The poem included these lines: “Jew boy, you took my religion and adopted it for you/ but you know that black people were the original Hebrews.” In an article on the crisis, Professor Dorman uses this instance to illustrate how a key tenet of Black Israelitisim played a role in tensions even for many blacks outside of the movement’s orbit.

The radical brand of Black Israelites became centered in an organization commonly referred to as One West, a play on the location’s address on a main Harlem thoroughfare, 125th Street. It was from this institution that most of the militant, costumed street preachers emerged. One West eventually split into two groups — one of them the present-day Harlem-based congregation and the other one in Pennsylvania — both noted for their radical anti-Semitic and black supremacist beliefs.

The Harlem branch is presently led by Jermaine Grant, who goes by the name Tazadaqyah, and the title “chief high priest.” He has been quoted as saying that in a messianic age, all whites will be killed or enslaved. Earlier this year, he was convicted of a multi-million-dollar fraud scheme involving funds from his congregation.

Princess Jones, a writer for an online forum on religion, detailed her visit to the congregation in an article on a class she attended there earlier this year. The “high priest” detailed how each of the 12 tribes of Israel correspond to a different minority group, with blacks being the descendants of Yehudah. In their scheme, Haitians are Levi and Mexicans trace to Yissachar.

Jones said that the class leader espoused a theology of minorities of color as the “chosen,” and quoted him as saying, “Our people are lost because they have been lied to by the European people.”

Much of the group’s conspiracy theories of Jews usurping the rightful place of blacks, and conspiracy theories about a world controlled by Jews, resonate in the anti-Semitic rhetoric of other fringe black religious leaders such as those of the Nation of Islam; most prominently its leader, Louis Farrakhan. Professor Dorman suggests that much of the Nation of Islam’s model and rhetoric has in fact been borrowed from more radical elements of Black Israelite movements.

Still, he cautioned that the degree of anti-Semitism and anti-white sentiment to which today’s Black Israelites subscribe varies.

“It depends on the individual and their level of education and of alienation from society,” said Professor Dorman. “If you are poorer and less educated you are more likely to cling to a notion of racial exclusivity and to think that history is wrong and the ancient Jews were really black. If you are higher up on the socio-economic scale you will likely have a more nuanced version of their beliefs and say something like ‘race is a modern concept and Jews may have had many speckles.’”

He added that aggressively militant elements still constitute only “a very small fraction,” and cautioned not to judge even more extreme parts of the movement by the two killers who have brought it a new wave of attention.

“Don’t judge it by a few crazy murderers,” he said. “In a lot of cases, a lot of the more extreme rhetoric is for public consumption and is a way to get attention. It doesn’t necessarily describe all the members.”

According to some organizations that have tracked anti-Semitic and anti-white activity among Black Israelites, some of its branches have moved in an increasingly extreme direction in recent years and have made efforts to recruit followers both online and in prisons.

In an interview with the Associated Press, J.J. MacNab, a fellow at George Washington University’s Program on Extremism, said that the internet has played a key role in helping the most militant elements of Black Israeliteism spread its message.

“Once you go online, you find a bigger world,” he said. “They take pride in confronting Jewish people everywhere and explaining that they are evil.”