It’s About the Building 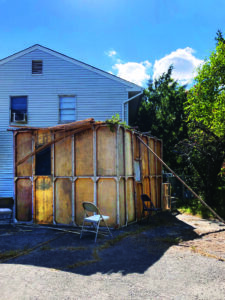 Not the Opening Ceremony

It’s almost puzzling that Rabi Tarfon has to tell us in the Mishnah in Avos (2:16), “It’s not your duty to finish the work, but neither are you at liberty to walk away from it.” Surely that fact is obvious?

It seems Rabi Tarfon knew that it isn’t.

For many of us, “playing our part” is insufficient. We want to do it all, play all the parts — the architect who envisages and designs how the building should look, the chief engineer, plumber, electrician and all the rest.

A good example of this phenomenon is repeatedly demonstrated in the world of tzedakah. People like to give money for something that will one day bear their name and the name of their family — a building, a beis medrash, a school or a shul. They like to see something tangible and lasting come from their investment. Raising money for projects where the money might achieve as much or more, but where that achievement will not be seen, is much harder.

Chazal say that the Avos, Avraham, Yitzchak and Yaakov, were all told that everything they planned, designed and worked for would culminate in their children inheriting Eretz Yisrael. The jewel in the crown would be a building in which the Shechinah and Klal Yisrael would meet. They also saw that building in flames after only 410 years and their children carried off into galus. It would, of course, be rebuilt in an even grander and more opulent way, becoming one of the wonders of the world… for 420 years. After that, flame and sword would return and a new and seemingly endless galus would begin.

Yet even though they never lived to build the Batei Mikdash themselves and they certainly knew that each would only last a short time, the Avos threw every atom of their physical and spiritual beings into the task of laying the foundations upon which the Batei Mikdash would rise. There was not the slightest suggestion of ignoring the work, even if they wouldn’t finish it.

The Avos, Moshe and Aharon and Dovid Hamelech all understood that their task was to prepare the ground so that those buildings could one day stand tall. It would be others whom those buildings would be named after.

I recall a lady who was one of the closest friends of my late wife. She was a baalas teshuvah, and despite her lifelong commitment to attending shiurim, her Torah knowledge never achieved the level of most of the women in her community.

When her oldest daughter attended seminary, it was one of the most prestigious in the world. She excelled in her learning and soon became the “rosh hatalmidos.” Her mother often expressed her pride by saying, “I am zocheh to have the rosh talmidah of the seminary as a daughter!” She saw her fulfillment in the achievement of her children and what they built. She had the satisfaction of knowing she had created the environment and foundations for what came next.

This year, the day after Tishah B’Av, I spent a month flying to England and Israel to see my children and grandchildren. Because of COVID, I hadn’t been able to see or hug them for nearly two years.

On the last day of my trip, my Yerushalmi children and I went on the wonderful tour beneath the Kosel. There the picture of the two Batei Mikdash that none of the Avos, Moshe, Aharon or Dovid got to see came vividly to life.

I was astonished to learn that those who were so determined to snuff out any memory of what once stood there had done a poor job. As they built around and on top of the Beis HaMikdash, they left much underneath unspoiled. It is easy, walking down through the levels of the original Temple, to see yourself walking back through time. It is also easy to smile at the failure of Klal Yisrael’s enemies, then and now, to achieve their wicked plans.

The foundations that Klal Yisrael were created from, like their Beis HaMikdash, run immensely deep and were constructed with perfection and precision by the greatest of our builders. They did not require the kudos that come with being at the “opening ceremony.” They knew that role would be taken by others, but that in no measure distracted them from playing their part to perfection so that ceremony would one day take place.

Perhaps that’s one of the most profound messages behind the sukkos that we build every year when we add the words “sukkas Dovid hanofales” which refer, according to the Mahari Karo, to the fallen Mikdash.

We hope to live to see the Beis HaMikdash rebuilt. But if we don’t, as long as we can honestly claim that we played our part in its rebuilding, we children of the Avos can smile at the fact that we will have a cheilek when it is finally reconstructed, never to fall again.

Walking a few weeks ago beside the foundations our enemies missed, it was comforting to feel that that time is coming very soon.