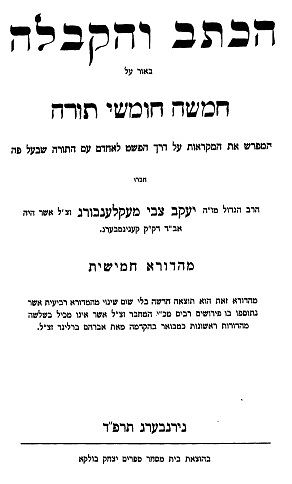 He fought against the Reform movement, including  their “rabbis” convention, held in 1844. He opposed any change in halachah, and was not willing to officiate at any chuppah where the basic halachos were not heeded by the couple being married. When he was once forced by the government to officiate at such a wedding, he added at the chuppah that the kiddushin was “k’das Kaiser Wilhelm,” in reference to the Prussian King at the time, and not in accordance with “das Moshe v’Yisrael.” Afterwards, the couple agreed to take upon themselves the halachos that Harav Yaakov Tzvi requested, and he later held the chuppah again, k’das Moshe v’Yisrael.

Harav Yaakov Tzvi was known as one of the foremost commentators on the Torah. His work, Haksav V’hakabbalah, is an explanation on the Torah, based on drush and halachah. Many times, his explanations shed new light on the pesukim. He based much of his work on the Vilna Gaon’s teachings.

Harav Yaakov Tzvi printed his sefer first in 5599/1839, as a separate sefer. It was only in 5620/1860 that it was printed together with the Chumash, as it has appeared ever since.

He also wrote Iyun Tefillah, his explanations on tefillah, which was printed together with Derech Hachaim (also on tefillah) of Harav Yaakov of Lisa, the Nesivos Hamishpat.

In 44 B.C.E., Roman dictator Julius Caesar was assassinated by a group of nobles that included Brutus and Cassius.

In 1493, Christopher Columbus returned to Spain, concluding his first voyage to the Western Hemisphere.

In 1767, the seventh president of the United States, Andrew Jackson, was born in Waxhaw, S.C.

In 1913, President Woodrow Wilson met with about 100 reporters for the first formal presidential press conference.

In 1919, members of the American Expeditionary Force from World War I convened in Paris for a three-day meeting to found the American Legion.

In 1985, the first internet domain name, symbolics.com, was registered by the Symbolics Computer Corp. of Massachusetts.