According to Rabi Shimon in Bava Metziah 106:2, this day is the onset of the summer season

In 5151/1391, many Jews were killed by a rioting mob in Seville, Spain. The riots spread throughout Spain. 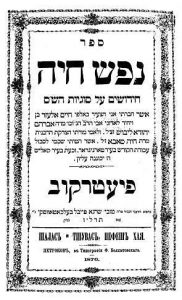 Harav Chaim Elazar Waks was born in 5582/1822 in Tarnogrod, in the Lublin region.

Rav Chaim Elazar was chosen as a son-in-law by Harav Moshe Halberstam, zt”l, Rav of Zavrov, oldest brother of the Divrei Chaim of Sanz, zy”a. After the passing of his first wife, he married the daughter of Harav Yisrael Yehoshua of Kutna, zt”l, the Yeshuos Malko.

Rav Chaim Elazar was one of Poland’s most famous Torah personalities. He was also an askan who worked tirelessly for the klal.

Rav Chaim Elazar served as Rav of Tarnogrod for 22 years. During this entire time he accepted no wages. He taught hundreds of bachurim there.

In 5622/1862, Rav Chaim Elazar was appointed Rav of Kalisch, replacing Harav Meir Auerbach, zt”l, who had moved to Eretz Yisrael. His talmidim were so close to him that they came there with him.

In Kalisch, Rav Chaim Elazar both taught his many talmidim and was also mekarev many of the city’s residents.

In 5629/1869 he was named Nasi of Kollel Polin in Eretz Yisrael and was active on behalf of the yishuv there.

Due to a breach in tznius, Rav Chaim Elazar eventually chose to leave his position in Kalisch, saddening many of the townspeople.

He thereupon moved to Warsaw, where he didn’t serve in the rabbanus.

All his life, Rav Chaim Elazar loved Eretz Yisrael. When he traveled there in 5646/1886 with his father-in-law, he bought a large plot of land and planted esrogim. He would sell these esrogim of Eretz Yisrael, in line with his psak regarding the esrogim of Corfu (Greece), in the streets of Warsaw before Sukkos.

In 5649/1889, Rav Chaim Elazar took ill and traveled to the resort town of Kozhnitze. He was niftar on Shabbos Parashas Chukas, 1 Tammuz, and was buried in Kalisch, where an ohel was erected over his kever.

Rav Chaim Elazar was survived by his only son, Reb Moshe, and seven daughters, all married to talmidei chachamim, among them Harav Yosef Kalisch, zy”a, the Amshinover Rebbe.

Rav Chaim Elazar named his sefer Nefesh Chayah, after his mother. He writes in his introduction that his mother asked him to commemorate her name, just as the Noda BiYehudah named his sefarim after his father, Noda Bi“Yehudah” and mother, Tziyun Lenefesh “Chayah.”

In 1777, the Continental Congress in Philadelphia adopted the Stars and Stripes as the national flag.

In 1846, a group of U.S. settlers in Sonoma proclaimed the Republic of California.

In 1928, the Republican National Convention nominated Herbert Hoover for president.

In 1954, President Eisenhower signed an order adding the words “under G-d” to the Pledge of Allegiance.

In 1985, the 17-day hijack ordeal of TWA Flight 847 began as a pair of Lebanese Shiite Muslim terrorists seized the jetliner shortly after takeoff from Athens, Greece.