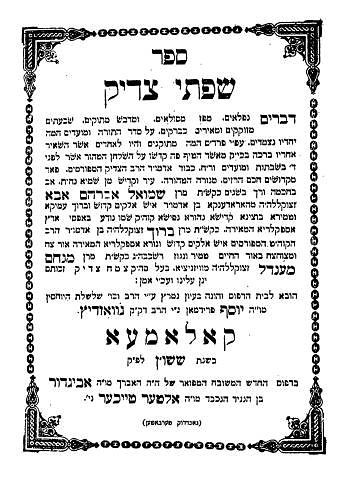 5427/1667, The Jews of Rome ran the humiliating “Carnival Race” for the last time. Every year, during Rome’s annual Carnival (held on Monday), Jews had been subjected to a humiliating medieval practice of running a race along the main street, wearing unseemly attire, while the crowd mocked them, threw trash, and rained heavy blows upon them. (The event often proved fatal.) As a further indignity, Jews were forced to contribute financially to the operation of the Carnival. During this time, Jews were confined to living in the Roman Ghetto, a walled quarter with three gates that were locked at night. The Jews were subjected to other degradations, including having to attend compulsory Catholic sermons on Shabbos. Outside the ghetto, they were required to wear identifying yellow clothing.

Harav Shmuel Avraham Abba Hager was the son of Harav Baruch of Vizhnitz, the Imrei Baruch. He was born in 5625/1865.

Reb Shmuel Abba was chosen by Harav Moshe Mordechai Twersky of Makarov to be the chassan of his daughter, Hinda Mattel. Reb Moshe Mordechai himself was the son-in-law of Harav Yehoshua of Belz.

In 5553/1893, after the petirah of his father, the Imrei Baruch, on 20 Kislev, Reb Shmuel Abba was appointed Rebbe in Horodenka, despite his young age. Many Chassidim flocked to his court.

Unfortunately, Reb Shmuel Abba was not destined to lead the Chassidim for long; just two years later, on 30 Shevat, the first day of Rosh Chodesh Adar, 5655/1895, he was niftar. He was only 30 years old at his petirah.

The divrei Torah of Reb Shmuel Abba were published by his talmid Harav Yosef Friedman, Rav of Gvodzitz, under the name Sifsei Tzaddik. This was a compilation of the written works of Reb Shmuel Abba, talks that he had delivered at his tischen and later put to paper. It was published the year after his petirah.

Reb Shmuel Abba’s daughter was married to his nephew, Harav Menachem of Chodorov.

In 1942, the U.S. Joint Chiefs of Staff held its first formal meeting to coordinate military strategy during World War II. Daylight-saving “War Time” went into effect in the United States, with clocks turned one hour forward.

In 1943, the World War II battle of Guadalcanal in the southwest Pacific ended with an Allied victory over Japanese forces.

In 1986, during its latest visit to the solar system, Halley’s Comet came closest to the sun (its next return will be in 2061).