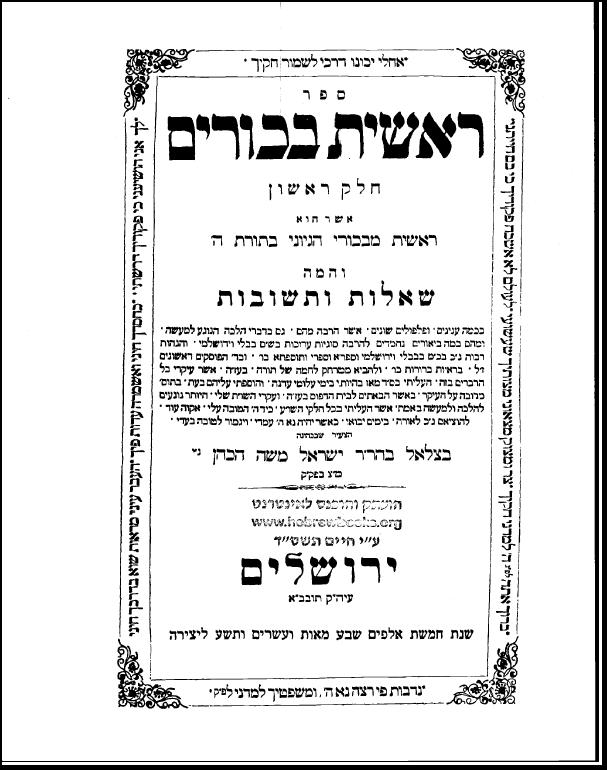 In 2488/1273 B.C.E, at Yehoshua’s behest, all the Yidden who crossed the Yarden performed bris milah.

In 5424/1664, a massive gathering of the Vaad Arbaah Aratzos was held in Lublin. Rabbanim from the four major Eastern Europe countries met about vital Yiddishkeit issues.

Harav Betzalel Hakohen was born on 27 Teves 5580/1820. His father was Harav Yisrael Moshe. The family was descended from Harav Moshe Hakohen of Kammai, a kohen meyuchas.

As a young boy, Reb Betzalel was known for his phenomenal memory. At the age of 11, he knew the Sedarim of Moed and Nashim by heart.

On the day he turned bar mitzvah, he made a siyum on the entire Shas, concluding with a lengthy pilpul as his bar mitzvah drashah.

At the age of 18, he was known as a budding talmid chacham, fluent in all facets of the Torah. A drashah that Reb Betzalel delivered during this period was later published in his Reishis Bikkurim; it was over 20 pages long.

After his marriage, Reb Betzalel continued learning, growing from day to day.

Following the petirah of Harav Yosef Shashkes, Reb Betzalel was appointed Dayan in his stead.

Reb Betzalel was knowledgeable about the intricacies of the calendar and the various zmanim, and he compiled a complete list of zmanim for Vilna.

He was very active in promoting shemiras Shabbos and used to go out to the market every Friday afternoon to warn the shop owners to close their businesses.

He wrote many sefarim, among them She’eilos U’teshuvos Reishis Bikkurim and Tosefes Bikurim. His margins in the Shas were published under the name Mareh Kohen and are in every edition of the Vilna Shas.

In 1312, Pope Clement V issued a papal bull ordering dissolution of the Order of the Knights Templar.

In 1638, religious dissident Anne Hutchinson was expelled from the Massachusetts Bay Colony for defying Puritan orthodoxy.

In 1765, the British Parliament passed the Stamp Act of 1765 to raise money from the American colonies, which fiercely resisted the tax. (The Stamp Act was repealed a year later.)

In 1820, U.S. naval hero Stephen Decatur was killed in a duel with Commodore James Barron near Washington, D.C.

In 1933, during Prohibition, President Franklin D. Roosevelt signed a measure to make wine and beer containing up to 3.2 percent alcohol legal.

In 1941, the Grand Coulee hydroelectric dam in Washington state went into operation.

In 1943, the Khatyn Massacre took place during World War II when German forces killed 149 residents of the village of Khatyn, Belarus, half of them children.

In 1988, both houses of Congress overrode President Ronald Reagan’s veto of the Civil Rights Restoration Act.