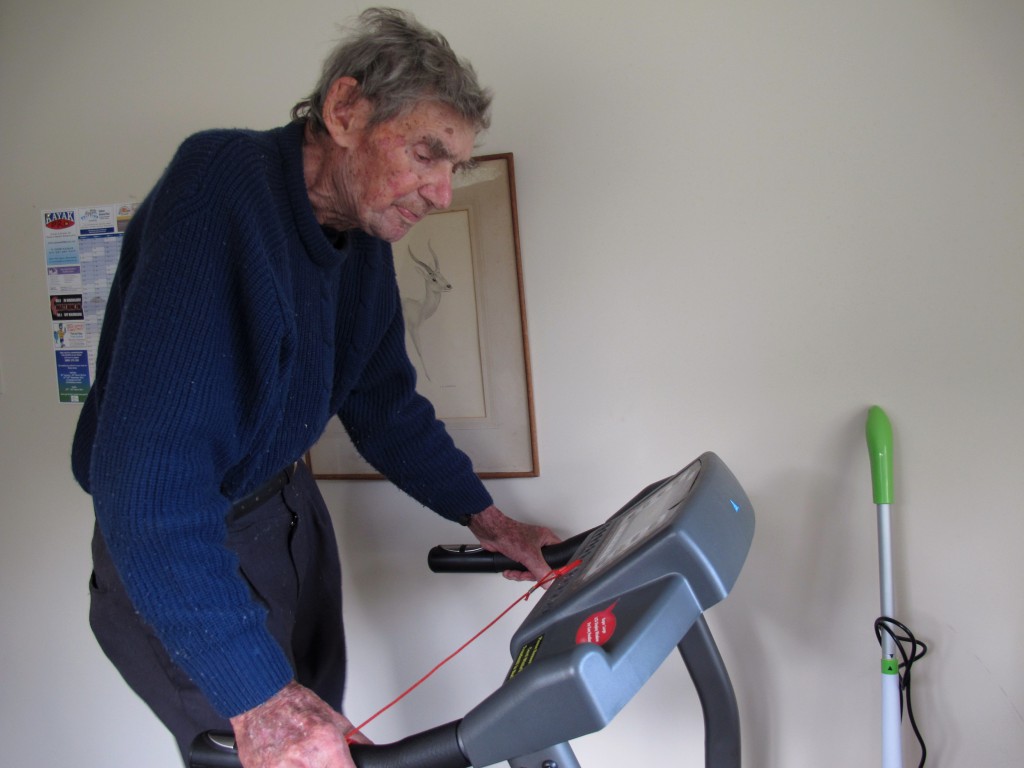 NGATAKI, New Zealand (AP) — Bob Edwards was born before the first Model T rolled out of Henry Ford’s factory in Detroit. He learned to drive in a French car that had a lever instead of a steering wheel. And he’s still on the road, only now in a red four-wheel-drive Mitsubishi.

The oldest licensed driver in New Zealand, and one of the oldest in the world, has been driving for 88 of his 105 years and has no plans to give it up, just as he intends to keep working out every morning in his home gym, and to keep regularly cooking meals for himself and his wife, who’s 91.

He’s been involved in just one crash in his life and has gotten just one speeding ticket, a citation that still gets him riled up years later. When he broke his left hip three years ago, his doctors said to stop driving for six weeks but he didn’t pay them much mind. After all, he says, he drives an automatic and only needs his right leg for that.

In New Zealand, drivers older than 80 must have their health and vision tested every two years to stay on the road. Many countries in Europe and U.S. states have similar requirements.

While stories about elderly drivers making mistakes or causing crashes often make headlines, it’s young drivers who tend to cause the most damage.

“Older drivers, on a per-kilometer-driven basis, are involved in far fewer crashes than younger drivers,” said Andy Knackstedt, a spokesman for the New Zealand Transport Agency, which oversees driver testing.

He said that for many elderly people, retaining a license helps them maintain their independence, mobility and dignity. “Our job is really to balance that with the need to make sure our roads are safe,” he says.

Edwards drives three times a week to the store 9 miles (15 km) down the road. He picks up groceries on Sundays and the newspapers on other days. Occasionally, he says, he’ll drive farther afield, to a medical appointment or to visit friends.

He learned to drive in his uncle’s car, a De Dion Bouton. “It was something new. Cars were just coming in,” Edwards says. “I mean, it was just marvelous.”

He got his first license in 1925 at age 17. Two years later, he saw a Salvation Army ad seeking young men to work on the farms of England’s colonies.

“They told me Canada was very cold, Australia was very hot, but New Zealand, they said, was just right,” Edwards says. “So I picked New Zealand.”

His wife, Lesley, stopped driving about 30 years ago. Her husband always took the wheel, anyway, and he will stay with it as long as he can.

“As far as I’m concerned, driving is a part of me,” he says. “I mean, that was me. I was a driver. And I could drive anything. Anything at all.”

They said Montri Boonprom-on, 41, faces charges of possessing wildlife and carcasses and could face up to four years in jail and a fine of 40,000 baht ($1,300).

Thailand is a hub of the international black market in protected animals. While the country is a member of a convention regulating international trade in endangered species, Thai law does not extend protection to many alien species.

Police also found a hornbill and a leopard, both protected by Thai law, which were packed in a box and were scheduled to be delivered to clients on Monday.

“We have been monitoring the location for a few days after the neighbors complained about the noise from the animals,” Ek told reporters during the raid in a residential area of Bangkok’s Klong Sam Wa district. “And if you looked through the gate, you could spot lions in the cage.”

MISSOULA, Mont. (AP) — A Pennsylvania doctor on a guided fishing trip in southwest Montana went home with an amazing tale of hauling in a 25-pound lunker — a baby moose she helped rescue from a rushing river.

Karen Sciascia of Red Hill, Pa., and a guide were fishing the BigHoleRiver on Saturday when they spotted a cow moose with a calf trying to cross the waterway.

“We were watching this adult female struggling back and forth, and we didn’t see a baby until we got close,” Sciascia told the Missoulian for a story published Thursday. “Mom kept pushing — the current was pretty swift. The mother bolted and took off across the river. She was trying to get across the main portion of the channel, and even she struggled.”

When the calf stepped off the gravel bar to follow its mother, it was swept downstream.

“It was small, and the river was swift,” Sciascia said. “We lost sight of the baby. It was hurtling downstream and was being pushed by the river. It was too small to ever fight the current.”

“We got up alongside it, and I just … scooped it up from the river under its front legs,” Sciascia said.

“It was breathing, and with my hand on its chest, I could feel its heart beating real fast.”

McLean rowed the raft upstream and snapped a photo before they dropped off the calf at the side of the river.

The mother had disappeared into the woods but returned to the river after hearing the crying of her young calf. It sounded like a puppy, Sciascia said.