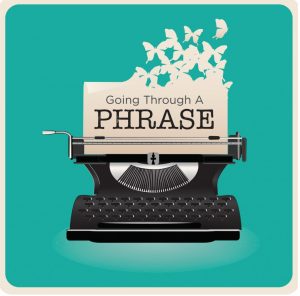 Jews have often been called “the canary in the coal mine.” Like the miners who carried canaries to detect carbon monoxide or other toxic gases, a society on the brink of cataclysm targets Jews as the front-line victims.

But, as you probably suspected, I had a different meaning of canary in mind.

“canary — A Bronx version of the Yiddish/Hebrew incantation against the evil eye: kayn ayn hore.”

It was thought of as a jinx, a kind of psychic weapon. Describing its potency, Rosten explained, “‘Canary’ was used by Bronx and Lower East Side children of Jewish immigrants in various ways, from the placating to the admonishing to the threatening. … “Don’t give me a canary!”… None was uttered in an aviary.”

I tend to spell it as I hear it: kenahora. But official Hamodia style has it as “kein ayin hara” — the equivalent of the Hebrew “bli ayin hara.” Both are essentially informal prayers (not part of the liturgy), meaning “May there be no evil eye.”

One hazard of the popularity of the expression is that it detracts from the reality and severity of the peril. In an age of skepticism, it’s all too easy to scoff at ayin hara as superstition. But it is a real and malevolent force, not to be taken lightly. In fact, the Midrash (Tanchuma, Miketz 8) says, “There is nothing more harmful than the evil eye.”

The origins go back to Biblical times. Beset by the famine in the Land, Yaakov sent 10 of his sons to Mitzrayim to buy food. And, the Midrash (Bereishis Rabbah 91) says, Yaakov warned them to avoid ayin hara — not to call attention to themselves by entering Mitzrayim together. Rather, stay inconspicuous and enter through 10 different gates.

Later, when Yaakov blessed the sons of Yosef, he said, “And may they proliferate abundantly like fish.” Why fish? Rashi explains that fish are fruitful and multiply and they are not affected by the evil eye — because they are hidden from the eyes of man (Berachos 20a).

The Midrash (Tanchuma Ki Sisa 31) says that the first Luchos — Tablets of the Law — were broken because they were given in a public spectacle. The second Luchos were given quietly.

The Talmud relates that Rav Yehudah cautioned Ravin (Bava Metzia 107) not to buy land close to a city. He quoted Rav Abbahu that it is prohibited for a person to stare at another’s field when its crop is full and ready for harvest. Out of jealousy [even unintentionally], he might harm the produce with an evil eye. Similarly, land near a town may be harmed by the people of the neighboring town watching it.

Recently, I was at a wedding where both families, each in their own way, were studies in struggle, faith and survival. The joy was intense. I found myself saying kein ayin hara over and over, and over again. May they, and all of us, be blessed and protected.

Sadly, as with much of Yiddish culture, the concept of ayin hara has become dehydrated and adulterated. In a way, it’s like “kosher-style” food. All that’s left is a mixture of natural and artificial flavor. What the Yinglish expression misses is the substance and spirit of ayin hara.

Even so, the vestige of Judaism in American Jewish culture — the pintele Yid — means there’s still a pulse.

Rosten told the story of a Jew who takes the witness stand and the district attorney asks him his age.

The DA demands the witness answer the question — with no comments.

At this, the defense attorney asks the judge if he may be permitted to ask the question.

“Kein ayin hara, how old are you?”