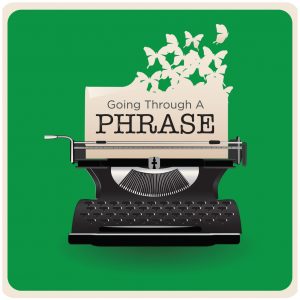 Age-old question: “Why do they call it a fast when it goes so slow?”

Answer 1) Nu, so what should we call it?

Answer 2) When we’re in stress or in pain, our perception of time gets distorted. As Einstein could have told you, time is relative.

Oddly enough, when you’re praying intensely on Yom Kippur, your rapture could slow down your perception of time. A study in the Journal of Consumer Psychology came to a remarkable conclusion: Time doesn’t fly when you’re having fun. “Perceptions of duration are influenced by music in a way that contradicts conventional wisdom.” People listening to music they enjoy can get lost in the experience, making it feel longer.

Answer 3) It’s a slow fast for the same reason we think we need to torment ourselves on Yom Kippur. We are victims of a lexicographic sin-drome: It is the Anglo Saxon conquest of Torah sources via English translation. When Torah is Anglicized it risks becoming altered.

I thought I had coined a phrase: “English as a Jewish language.” Then I discovered that sociolinguist Joshua Fishman put that coin into circulation in 1985 (Readings in the Sociology of Jewish Languages). Fishman wrote, “English or some Jewish variant thereof is probably the most widespread Jewish Language of our time.”

Fishman focused on such phenomena as Yiddish words that made themselves heimish in English, and the lingua franca of English-speaking yeshivah students: “Yeshivish.”

But I was thinking of a more insidious syndrome: assimilation by translation. Spiritual linguicide. We let Judaism become corrupted by the translation of Jewish texts into alien languages. Reading literal translations results in seeing Torah and mitzvos through distorted theological lenses.

When we bang on our chests during the Viduy prayer acknowledging our blunders, it is a symbolic gesture to shake us out of habit. That’s worlds apart from the medieval flagellants who marched through Europe, whipping themselves into a bloody frenzy to atone for sins.

A penance for your thoughts.

No, flagellation is not comparable to the custom of having a friend go through the motions of “whipping” you with a gartel on Erev Yom Kippur. You’ve seen a gartel — the chassidic black belt. It’s a sash made of soft mesh. Getting hit with a gartel has all the impact of a lokshn lash (and if you know what that is, you’re using your noodle).

Which reminds me of a story.

A man came to Rabbi Yisrael of Ruzhin, zy”a, and boasted about his heroic efforts to do teshuvah. “All week, I don’t eat cooked food and I drink only water. I don’t sleep in a bed; and my shoes have nails coming through the soles to make them uncomfortable. Not only that, but I roll in the snow. And I have someone give me lashes.”

The Ruzhiner took the professional penitent outside and pointed toward a corral. “Do you see that horse?” he asked. “He never eats cooked food and he only drinks water; he sleeps on the ground, he has nails in his shoes, rolls in the snow and gets lashed every day. But after all is said and done, he is still a horse.”

Now that does sound a lot like tormenting yourself, doesn’t it? Yet it’s called a “Sabbath of complete rest.”

The Hebrew word translated as “afflict” is saaneh. The Etymological Dictionary of Biblical Hebrew, based on the commentaries of Harav Samson Raphael Hirsch, zt”l, shows that the same root word, aneh, is related to the words for respond, proclaim, testify — as well as to humble yourself or deprive yourself of food. That answers a lot.

The Rambam does not mention fasting or affliction in his laws of Yom Kippur (Shevisas Asor 1:4, 5). He says there is a commandment on Yom Kippur to “rest from eating and drinking.”

G-d doesn’t want us to suffer. The idea is to take a “rest” from activities that limit our spiritual reach. Yom Kippur is a taste of the World to Come, where “there is neither eating nor drinking” (Brachos 17a).

The Rebbe Reb Simchah Bunim of Peshischa, zy”a, felt that we have lost the knack to fast properly. He said, “If it were up to me, I’d abolish all fast days except Yom Kippur and Tishah B’Av. On Yom Kippur, the day is so holy, who needs to eat? And on Tishah B’Av, who can even think about eating?”