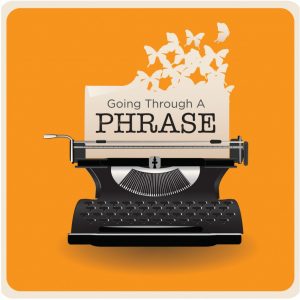 As chief cook and babel watcher of this column, it’s my job to keep up with what’s going down.

(If you’re not confused yet, consider the fact that the 1940s phrase “What’s going down?” is synonymous with “What’s up?” Welcome to the roller coaster of slang. … Which reminds me of when my wife and I took our then three-year-old daughter Naama to Luna Park in Tel Aviv. Naama called it the “amuse me park.”)

What’s coming up (or coming down the pike) is a linguistic milestone: the 130th anniversary of the creation of Esperanto.

In a glossary of terms in Garner’s Modern English Usage, Bryan Garner defined Esperanto as “An artificial language invented for universal use, with stems common to European languages and regularized endings. Dr. Ludovik Lazarus Zamenhof (1859–1917), a Polish linguist whose pseudonym was Dr. Esperanto (= Dr. Hoping-One), invented the language in his 1887 book Langue Internationale.”

Zamenhof was a Jewish doctor and oculist who attempted to heal the world with his own vision of a language that would unite all people. He created what became the most successful international artificial language — Esperanto. “Doktoro Esperanto” was indeed a “hoping one.” Zamenhof was a peaceful revolutionary who tried to achieve world union through creating a universal language. But he lived in a world of turmoil — born in Bialystok in 1859 and dying in 1917, in Warsaw, in the thick of World War I.

To make Esperanto as simple (and smoothly spreadable) as possible, Zamenhof used roots common to many European languages, especially the Romance languages — those derived from Latin, particularly French, Italian, Spanish and Portuguese.

He didn’t just create the language. He was skilled enough to translate Tanach, as well as, l’havdil, many secular works into his new language. Since then, at least 30,000 books have been published in Esperanto.

One fellow Esperanto revolutionary gave his life for the cause. Nikolai Vladimirovich Nekrasov headed the Tutrusia Ligo de junaj esperantistoj (All-Russia League of Young Esperantists). For the crime of being “an organizer and leader of a fascist, espionage, terrorist organization of Esperantists,” he was executed in 1938.

It’s not always easy to be peaceful.

Esperanto was originally named the “international language,” articulating the dream of world unity. “Free of imperial or national identity, Esperanto would serve neither dogma nor nationalism nor arms nor money but the conscience and reason of its users, who had determined to become a better people of the future.” (Esther Schor, Bridge of Words: Esperanto and the Dream of a Universal Language.)

Now where have I heard the idea of a universal language before?

“‘Come, let us build us a city, and a tower with its top in the heavens, and let us make a name for ourselves, lest we be dispersed across the whole earth.’ G-d descended to look at the city and tower which the sons of man built. And G-d said, ‘Behold, they are one people with one language for all, and this is what they do! … Come, let us descend and there confuse their language, that they should not understand one another’s language.’ … That is why it was called Babel, because it was there that G-d confused the language of the whole earth. …”

Speaking a common language is no guarantee of harmony — as the history of civil wars and dysfunctional families attests.

In English as a Global Language, British linguist David Crystal posits that English has become the new international lingua franca — the common language among speakers of other languages. Rather than an idealistic dream, this globalization is the utilitarian product of international trade and the internet. This isn’t Coca-Colonization. It’s not political. It’s Marshall McLuhan’s “global village.”

Esperanto still has many followers and users, but more as a language adventure than a social movement. In Bridge of Words, Esther Schor quoted sociologist Roberto Garvía: “‘Esperantists ended up speaking the same language, but not dancing to the same music.’ Ironically, while Esperantists were often vague about what united them, totalitarians, fascists, and Nazis were not; sooner or later, Esperanto would always be reviled as a cosmopolitan, subversive movement inimical to nationalism and tainted by its Jewish origins.”

Are you thinking what I’m thinking? …

We already had an international language well before Esperanto.

In Yerushalayim, Tzfas, Brooklyn, Berditchev, Antwerp and Rome … I was able to immediately strike up a conversation … in Yiddish.

Some people call it mamma loshen.

Michael Wex, author of Rhapsody in Schmaltz, wrote a book review of Bridge of Words in The New York Times. Wex told a story of an Esperanto convention with participants from many countries. During a break, all were allowed speak their own languages.

One after another “exclaimed with a sigh, ‘A mekhaye shoyn, redn a Yiddish vort — It’s such a pleasure to be able to speak Yiddish already.’”