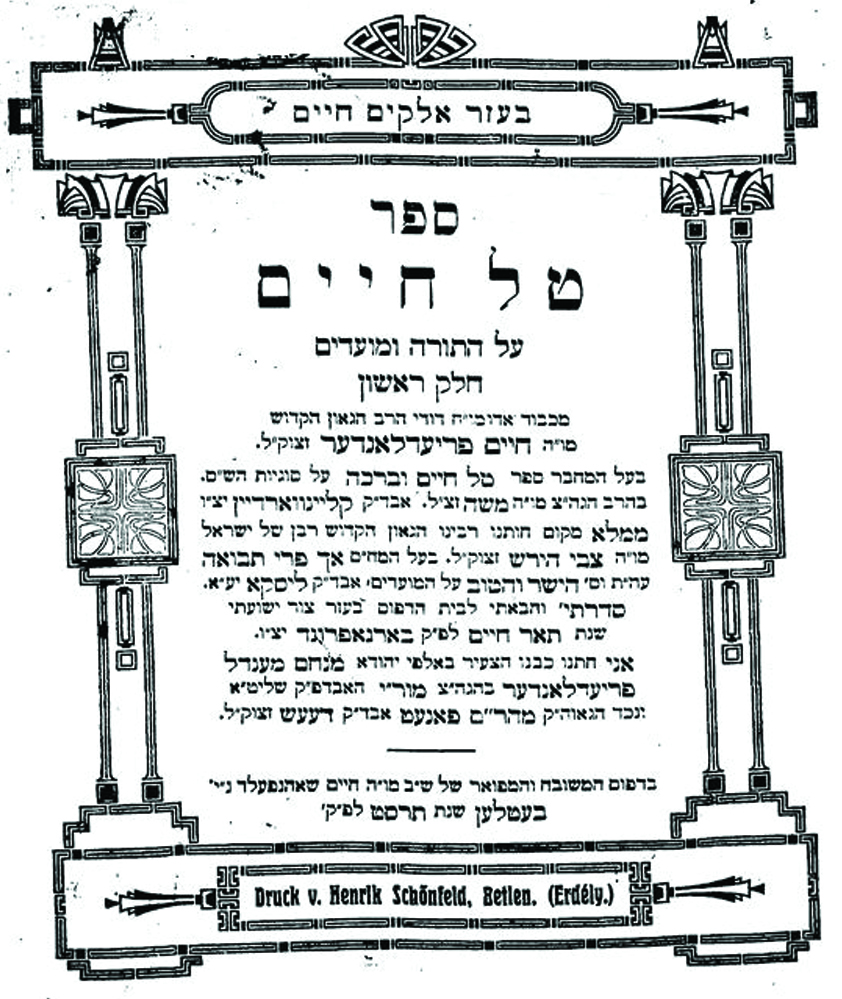 In 5524/1764, a letter written by Empress Catherine II of Russia opened the way for limited settlement of Jews in Riga.

Harav Chaim Friedlander was the son of Harav Moshe, who served as Rav of Kleinwarden, Hungary.

When he became of age, Reb Chaim was chosen as the chassan of the only daughter of Harav Tzvi Hirsh of Liska, the author of Ach Pri Tevuah.

Reb Tzvi Hirsh dearly cherished his son-in-law. Reb Chaim writes in the introduction to his Tal Chaim that he had no intention of publishing his Torah thoughts, until his father-in-law instructed him to do so.

Following the petirah of his father-in-law, Reb Chaim was appointed his successor, serving as Rebbe and Rav of Liska.

Reb Chaim was renowned throughout Hungary as a gaon of epic proportions and a masmid who was engrossed in learning Torah 24 hours a day. His chiddushim on the sugyos haShas, published under the name Tal Chaim U’vrahchah, allows for a glimpse into his vast and sharp knowledge and is indicative of the Torah scholar that he was.

Renowned also for his piety and asceticism, the Tal Chaim was famous for not being able to differentiate between the various coins of the Hungarian currency, once remarking when it was brought to his attention that the “red” coin was more valuable than the “blue” coin remarking that red is middas hadin and blue is middas harachamim; hence it should be the opposite.

He was niftar on 9 Iyar 5664/1904. It is related that at the time before his petirah, there was a change in the political climate of Hungary as well as a worsening of the economy. Nevertheless, the Rebbe and his kehillah tried to continue practicing their Yiddishkeit, keeping Torah and mitzvos, despite the duress and great hardship. Reb Chaim’s concerns did not only pertain to the economic hardship, but to the new political climate that worried him. A proclamation went out throughout the land that all Jews should be imprisoned and killed and their properties confiscated. The Rebbe went to the beis medrash and led the heartfelt tefillos; he offered himself as a korban tzibbur if this terrible verdict could be averted.

The following week, as the Rebbe was eating, a piece of food got lodged in his throat and he choked. In the merit of his self-sacrifice, the terrible tragedy against the Jews had been averted.

Before the levayah, it was discovered that there was no room in the ohel of his father-in-law, the Ach Pri Tevuah, for him to be buried. A minyan of prominent Rabbanim, including his son and successor Harav Tzvi Hirsh, went to daven at the kever of the Ach Pri Tevuah and requested that he should make room for his son-in-law. When they returned, a miracle occurred and the walls surrounding the kever literally moved. To this very day, one can still see that the tziyun of the Tal Chaim is literally connected to the wall of the ohel in Liska.

In 1754, a political cartoon in Benjamin Franklin’s Pennsylvania Gazette depicted a snake cut into eight pieces, each section representing a part of the American colonies; the caption read, “JOIN, or DIE.”

In 1864, Union Maj. Gen. John Sedgwick was killed by a Confederate sniper during the Civil War Battle of Spotsylvania in Virginia.

In 1926, Americans Richard Byrd and Floyd Bennett supposedly became the first men to fly over the North Pole. (However, U.S. scholars announced in 1996 that their examination of Byrd’s recently discovered flight diary suggested he had turned back 150 miles short of his goal.)

In 1951, the U.S. conducted its first thermonuclear experiment as part of Operation Greenhouse by detonating a 225-kiloton device on Enewetak Atoll in the Pacific nicknamed “George.”

In 1974, the House Judiciary Committee opened public hearings on whether to recommend the impeachment of President Richard Nixon. (The committee ended up adopting three articles of impeachment against the president, who resigned before the full House took up any of them.)