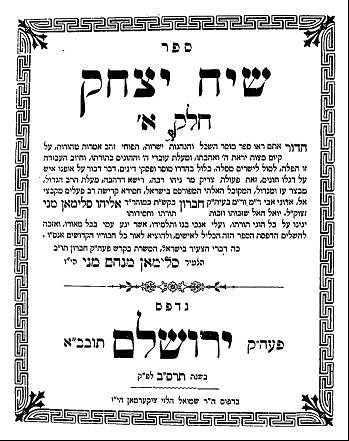 In 5594/1834, Spanish Queen Maria Christina abolished the Spanish Inquisition, which had existed for 300 years.

Rav Eliyahu ben Suleiman Mani was born in Baghdad in Tammuz, 5578 (1818). He was one of the best-known of the Iraqi Gedolim. The family name, Mani, is a sign of their descent from Dovid Hamelech. Mani stands for Migeza Nin Yishai, descending from the children of Yishai.

Young Eliyahu learned in Baghdad at the Beit Zilcha beis medrash, and was one of the outstanding talmidim of Rav Abdallah Somech. (He married his Rebbi’s sister, Samira.)

Rav Eliyahu was an associate of Rav Yosef Chaim of Baghdad, zt”l, the Ben Ish Chai, and with his blessings, he decided to move to Eretz Yisrael in 5616/1866. He settled in Yerushalayim, where he was warmly received by the Sephardic Rabbanim.

But then, two years after arriving in Eretz Yisrael, Rav Eliyahu was struck with a serious illness which caused him to be bedridden. The doctors knew no cure for his illness, only suggesting that he move to Chevron, where the mountain climate might be better for him. There he slowly regained his strength and played a prominent role in the development of the Jewish community.

In Iyar, 5624/1864, Rav Moshe Pereira was niftar. Rav Eliyahu was asked to become Chief Rabbi of Chevron. Initially he refused, but in 5625/1865 he acquiesced, on condition that he would not receive a salary. He would only take the post l’shem Shamayim. He retained this post until his petirah.

Although by nature an unassuming and generous man, Rav Eliyahu was steadfast in matters of halachah.

Rav Eliyahu was niftar on 8 Tammuz, 5659/1899. He was buried in Chevron, near the kever of the Reishis Chochmah.

In 1788, the United States Constitution went into effect as New Hampshire became the ninth state to ratify it.

In 1834, Cyrus Hall McCormick received a patent for his reaping machine.

In 1985, scientists announced that skeletal remains exhumed in Brazil were those of Nazi war criminal Josef Mengele.

In 1989, a sharply divided Supreme Court ruled that burning the American flag as a form of political protest was protected by the First Amendment.