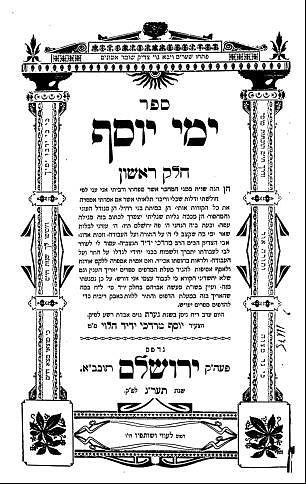 In 5434/1674, the Jews of Barbados were granted permission to take an oath on the Torah. One hundred fifty-one years later, also on 8 Adar, the Jews of Maryland were allowed to take a non-Christian oath.

Initially, Rav Yosef assisted his father in his job as melamed in the local Talmud Torah.

In 5650/1890, at the age of 23, Rav Yosef moved to Eretz Yisrael and settled in Tzfas. In 5671/1911, he moved to Yerushalayim and was appointed Av Beis Din of the Syrian community in Yerushalayim. Rav Yosef would travel as a shaliach for tzedakah matters to North Africa.

All his life, Rav Yosef lived in dire poverty. Four sons and a daughter passed away during his lifetime; only one son survived him.

Rav Yosef authored four sefarim: Toras Chacham, regarding the various halachos and minhagim pertaining to respecting a talmid chacham; Yemei Yosef, a two-part collection of his halachic responsa on the four parts of Shulchan Aruch (She’eiris Yosef, a compilation of various halachic discussions and drashos, was added as an appendix to the second part of the sefer); Birkas Yosef, on hilchos brachos; and Vayechi Yosef, on the various names and the halachic ramifications in regard to gittin. All his sefarim received warm haskamos from the leading Rabbanim of Yerushalayim, from both the Ashkenazic and Sephardic communities.

In 1633, Italian astronomer Galileo Galilei arrived in Rome for trial before the Inquisition, accused of defending the theory that the Earth revolved around the sun instead of the other way around. (Galileo was found vehemently suspect of heresy, and ended up being sentenced to a form of house arrest.)

In 1861, Abraham Lincoln was officially declared winner of the 1860 presidential election as electors cast their ballots.

In 1945, during World War II, Allied planes began bombing the German city of Dresden. The Soviets captured Budapest, Hungary, from the Germans.