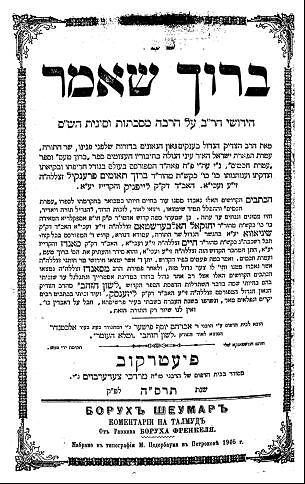 In 5130/1370, one hundred and thirty Jews were killed al kiddush Hashem in the city of Willitza, Hy”d.

Baruch was sent by his father to learn from leading Gedolim of the era: Harav Lieber Charif, Rav in Cracow, and Harav David Teveli, Rav in Lissa.

When he was just 18, the kehillah of Wisnicz, Austrian Galicia, appointed Rav Baruch as Rav. Despite his youth, the townspeople heeded his every word. Rav Baruch was Rav there for twenty-three years, until he left because of machlokes in the city.

In 5562/1802, he was appointed Rav in Leipnik, Moravia, where he found peace and was able to learn unhindered. There, he founded his famous yeshivah, where thousands of bachurim from all over Europe came to learn. He headed the yeshivah and was deeply involved with it until his last day, despite his commitments as Rav of the city. This yeshivah produced many leading Rabbanim for Klal Yisrael.

In Leipnik, Rav Baruch’s brilliance and abilities became evident. His derech halimud was deep, based on pilpul and cross-referencing.

He was also renowned for his concern and love for every Jew.

His sons were Harav Yehoshua Heschel, zt”l, Rav in Komarna, and Harav Yosef, zt”l, a nagid in Plonsk who ran the local yeshivah. His sons-in-law were Harav Chaim of Sanz, the Divrei Chaim, founder of the Sanzer dynasty; Harav Manish Mordechai Teumim of Brod; Harav Yechiel Meir Kaminer, father of Harav Yehudah Kaminer, the father-in-law of the Sfas Emes of Ger; Harav Yeshayah Goldshtoff of Cracow, and Harav Yeshayah Schiff of Zamstadt, zecher tzaddikim livrachah.

Rav Baruch wrote divrei Torah which he did not publish, explaining it would take too much time from his yeshivah obligations. After his petirah his son Harav Yehoshua Heschel and his son-in-law, the Sanzer Rebbe, worked on and published his writings. His best-known work is Baruch Taam.

In 1837, Queen Victoria acceded to the British throne following the death of her uncle, King William IV.

In 1898, during the Spanish-American War, the U.S. cruiser Charleston captured the Spanish-ruled island of Guam.