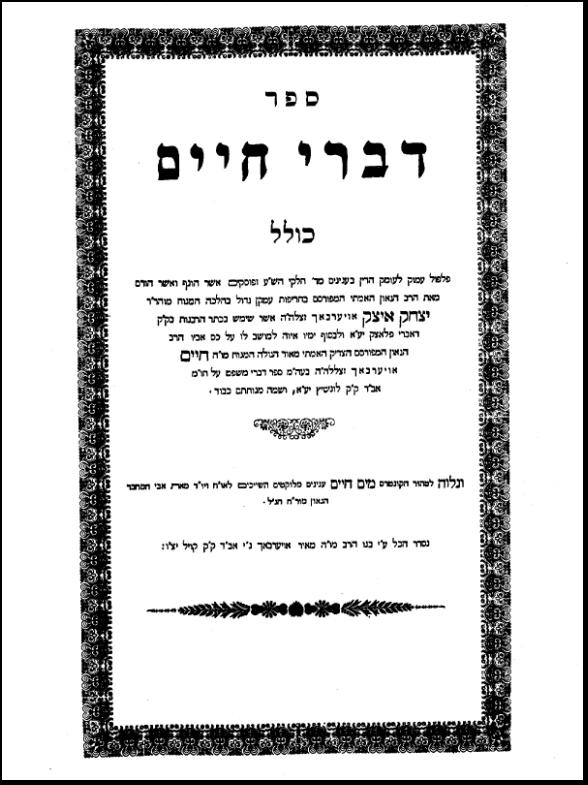 In 2369, (as recorded in Yalkut Shimoni) Moshe Rabbeinu completed Mishneh Torah and was told by Hashem that his petirah was near.

In 5576/1816, the final expulsion of the Jews of the city of Lubeck, Germany, took place. This was 117 years after they were expelled the first time.

Harav Yitzchak Auerbach was the son of Harav Chaim, zt”l, Rav of Luntchitz and mechaber of Divrei Mishpat on Orach Chaim and Mayim Chaim on Yoreh Deah.

His brother, Rav Menachem, zt”l, was Rav in Ostrovtza.

Rav Yitzchak was a gaon with an exceptionally sharp mind; he was called Rav Yitzchak Charif.

His first rabbinic post was in Dobri. Later he served as Rav in Plotzk. Following the petirah of his father, he succeeded him as Rav in Luntchitz.

Rav Yitzchak was the author of Divrei Chaim, chiddushim on all four sections of the Shulchan Aruch.

His son was the Gadol Hador Harav Meir Auerbach, zt”l, Rav in Kalisch and later in Yerushalayim, author of Imrei Binah.

In 1764, Charles Grey, 2nd Earl Grey, who served as British Prime Minister from 1830 to 1834 (and for whom Earl Grey tea is named), was born in Falloden, Northumberland.

In 1865, Confederate President Jefferson Davis signed a measure allowing black slaves to enlist in the Confederate States Army with the promise they would be set free.

In 1925, the Tennessee General Assembly approved a bill prohibiting the teaching of the theory of evolution. (Gov. Austin Peay signed the measure on March 21.)