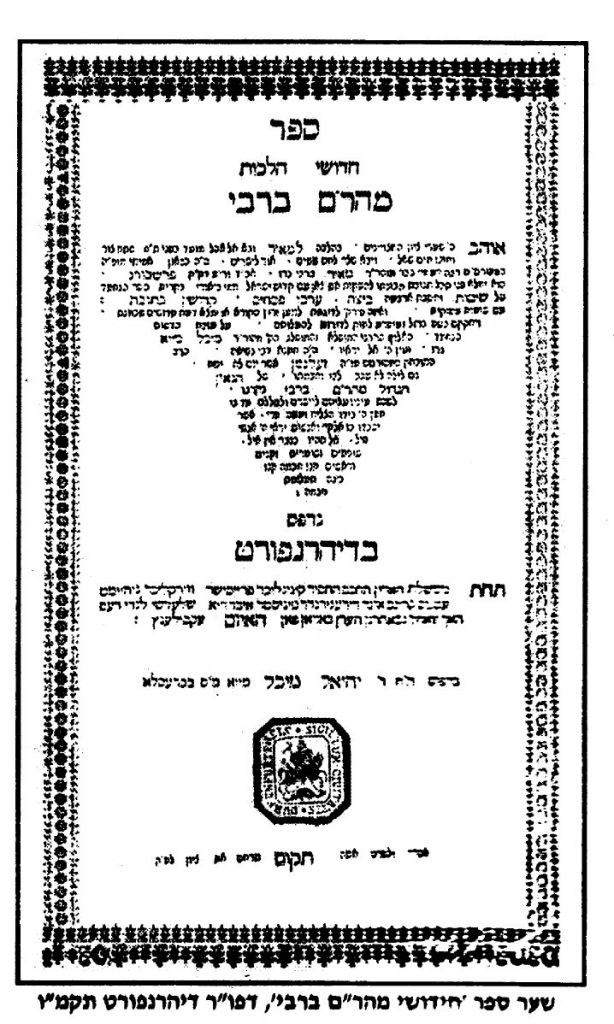 Harav Meir was born in 5485/1725 in Berabi, near the city of Halberstadt in Germany, to Harav Shaul and Rebbetzin Yentlichi.

He learned first from his father, and later under Harav Tzvi Hirsch Charif, zt”l, Rav of Halberstadt, who greatly assisted him in his growth in Torah and also cared for his welfare.

From there, Reb Meir continued on to the yeshivah of Harav Yaakov Paprish, zt”l, Rav of Frankfurt-am-Main and author of Shev Yaakov, where he stayed for two years. After that he returned to Halberstadt.

In 5498/1738, at the young age of 13, Rav Meir married Rebbetzin Elkeli, the daughter of Harav Michel of Halberstadt, zt”l. He dedicated himself solely to learning Torah, thanks to his brother-in-law Reb Nosson, who supported him.

Even at this young age, Rav Meir was already known as an outstanding talmid chacham and many lomdim in Halberstadt gathered around him. Later he was appointed Dayan in the city, and in 5517/1757, when Harav Moshe Brisk, zt”l, the local Rav, was niftar, Rav Meir was asked to fill this position, which he did for the next six years.

In 5523/1763, Rav Meir was accepted as Rav in Hali, Germany, but after a year, was selected as Rav of Pressburg, Hungary, a Rabbanus he held for the next 25 years until his passing.

Rav Meir was zocheh to teach many talmidim in all the communities where he was Rav.

Rav Meir was close with many Gedolei Hador, with whom he discussed halachic she’eilos, most notably the Noda B’Yehudah.

Rav Meir always sought peace in the kehillos he led. It is related that one year before Kol Nidrei, all the mispallelim were waiting for Rav Meir to enter. In the meantime, he was in the shul’s lobby, trying to make peace between two long-time enemies; he told them that he would not enter the shul and allow Kol Nidrei to start until they made peace with each other.

Sure enough, they heeded the Rav’s word and did so and the Yom Kippur davening was allowed to begin.

In 5549/1789, Rav Meir took ill. Even though he was bed-ridden, he continued his normal learning sedarim almost unchanged.

In 1938, aviator Douglas Corrigan took off from New York, saying he was headed for California; he ended up in Ireland, supposedly by accident, earning the nickname “Wrong Way Corrigan.”

In 1975, an Apollo spaceship docked with a Soyuz spacecraft in orbit in the first superpower link-up of its kind.

In 1997, Woolworth Corp. announced it was closing its 400 remaining five-and-dime stores across the country, ending 117 years in business.