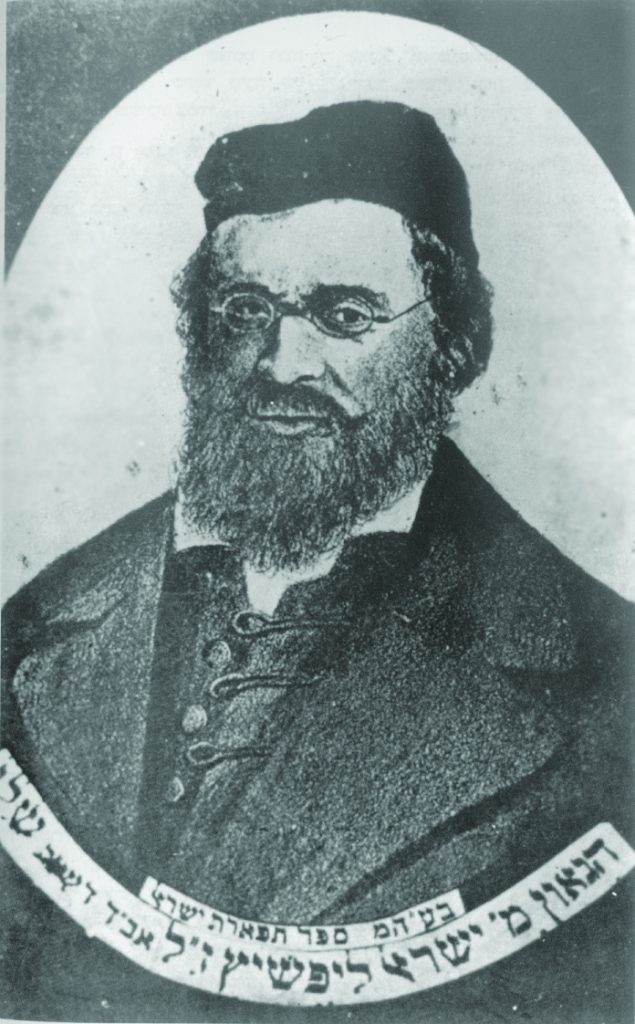 In 3340/422 B.C.E., Gedaliah ben Achikam, appointed by Nevuchadnetzar to rule the remaining Jews after the destruction of the first Beis Hamikdash, was murdered by Yishmael ben Nesaniah. This unfortunate event brought great hardship and grief to the Jewish people and is commemorated by a public day of fasting. (According to Radak, Gedaliah was killed on the second day of Rosh Hashanah.)

This date is also cited as a Yom Tov in Megillas Taanis. When the Jews defeated the Yevanim, in order to demonstrate their victory over the Hellenists they instituted using Hashem’s name on banknotes and ordinary documents, which was chillul hakodesh. On 3 Tishrei this practice was discontinued, so the day was celebrated as a Yom Tov.

Born in 5542/1782, Harav Yisrael Lipshitz was the son of Harav Gedaliah, Rav in Hazdeitsch and mechaber of Regel Yesharah and Chomrei Masnisa, and the grandson of Harav Yisrael, the Rav of Kliva who arranged the famous Kliva get.

Reb Yisrael was a talmid of Harav Akiva Eiger.

For over 50 years he was one of the leading Rabbanim of his generation, serving in Dessau, Schutland, Langefurt and, in his later years, Danzig.

Reb Yisrael was renowned for his mesirus nefesh for Torah; his son Rav Baruch Yitzchak attests in the introduction to Tiferes Yisrael that, at times, Reb Yisrael would fast for three days straight, day and night, learning without interruption.

Reb Yisrael was legendary for his tzedakah and chessed; even though he was the honored Rav, he went from door to door to raise funds.

Reb Yisrael wrote his own sefer Torah. On the day he finished writing it, he also made a siyum on Shas, thus completing Torah Sheb’al Peh and Torah Shebichsav simultaneously.

Reb Yisrael wrote other sefarim; most remained in manuscript form.

On Tzom Gedaliah 5621/1860, Reb Yisrael went to daven in shul as always. After Selichos, Shacharis and his regular shiurim, Reb Yisrael suddenly fainted and passed away, still adorned in tallis and tefillin.

Many thousands attended his levayah. Reb Yisrael was buried in Danzig.

In 1931, Clyde Pangborn and Hugh Herndon completed the first non-stop flight across the Pacific Ocean, arriving in Washington State some 41 hours after leaving Japan.

In 1953, Earl Warren was sworn in as the 14th chief justice of the United States, succeeding Fred M. Vinson.

In 1986, in an incident that helped expose the Iran-Contra affair, a plane secretly ferrying supplies to Nicaraguan Contra rebels was shot down over southern Nicaragua by Sandinista forces.