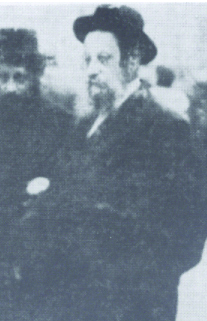 The fifth day of Chanukah.

Harav Yitzchak Shmuel Eliyahu Finkler was born in Radoshitz on 19 Adar 5652/1892. His father was Harav Meir Menachem of Radoshitz-Piotrikov.

In his youth, he was a talmid of his brother-in-law Harav Yaakov Horowitz, a descendant of the Ropshitzer dynasty. He was already noted for his outstanding abilities and middos at a young age.

In keeping with the minhag of the Radoshitzer Rebbes, Reb Yitzchak Shmuel Eliyahu would tovel in the mikveh numerous times a day. His Shacharis was very lengthy, at times lasting until the early afternoon hours. He slept very little, dedicating his nights to Torah and avodas Hashem.

On the Yamim Tovim, when Reb Yitzchak Shmuel Eliyahu would daven at the amud, the beis medrash and the surrounding streets were full of people who came to listen to his sweet and soothing voice.

He spent time in a number of camps, among them Buchenwald and Shliven. Thanks to the intervention of one of the prisoners, he was transferred from Shliven back to Buchenwald, where the conditions were somewhat easier. From there Reb Yitzchak Shmuel Eliyahu was transferred to Felsenberg, where he was niftar of starvation on 29 Kislev, the fifth day of Chanukah, 5705/1944.

In 1934, Japan formally renounced the Washington Naval Treaty of 1922.

In 1940, during World War II, Germany dropped incendiary bombs on London, setting off what came to be known as “The Second Great Fire of London.”

In 1996, guerrilla and government leaders in Guatemala signed an accord ending 36 years of civil conflict.