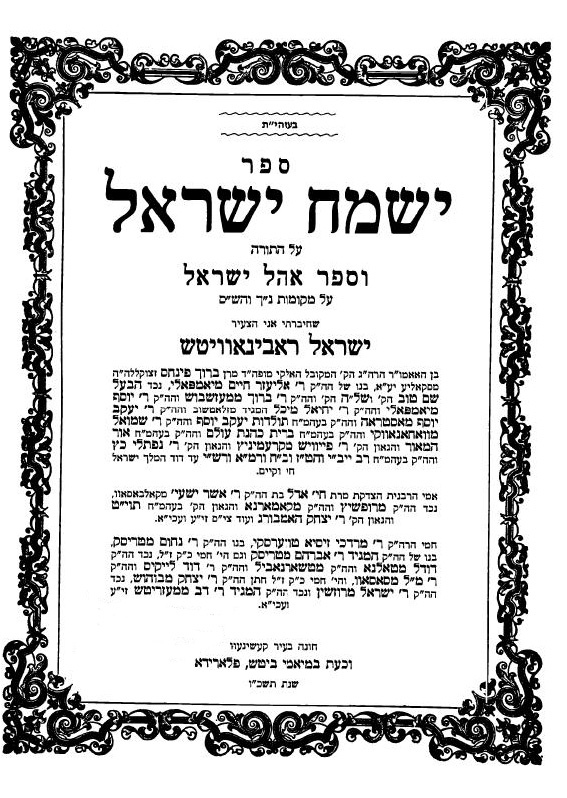 Hashem also created the two sea giants, the Livyasan and his female counterpart. Since the world would not be able to contain them if they were to become fruitful and multiply, Hashem slaughtered the female and salted it away to feed tzaddikim in a future era.

Harav Yisrael Rabinowitz was born in Skolya in 5665/1905. His father was Harav Baruch Pinchas, zt”l, who was a scion to the Skolya dynasty as well as Zlotchov. They were also descendants of the Baal Shem Tov and many other tzaddikim.

During World War I, the family moved to Vienna. Reb Baruch Pinchas was appointed Rebbe after the petirah of his father, Harav Eliezer Chaim, zt”l, Rebbe of Yampola, who was niftar in New York in 5676/1916.

When Reb Yisrael became of age, he married the daughter of Harav Mordechai Zusia Twersky, zt”l, Rebbe of Hotzalas.

After his marriage, Reb Yisrael moved to Kishinev, where he founded a yeshivah and beis medrash, naming them for the Skolya Rebbes.

His father, Reb Baruch Pinchas, was niftar on 24 Adar 5680/1920 in Vienna, and Reb Yisrael was appointed Rebbe. He was hence known as the Skolya-Kishinev Rebbe.

After a few years in Kishinev, Reb Yisrael moved to London, where he founded Beis Medrash Ohel Yisrael.

Reb Yisrael was known for his greatness in Torah, and delivered many shiurim in all facets of Torah, notably in Halachah.

In 5708/1948, Reb Yisrael moved to America, settling in Brooklyn. Later, he moved to Miami Beach, where he founded a beis medrash.

He printed his divrei Torah under the name Yismach Yisrael.

In 1519, Portuguese explorer Ferdinand Magellan and his crew set out from Spain on five ships to find a western passage to the Spice Islands.

In 1977, the first of the “boat people” arrived in San Francisco from Southeast Asia under a new U.S. resettlement program.

In 1982, U.S. President Ronald Reagan announced that the U.S., France, and Italy were going to send peacekeeping troops back to Beirut.

In 1995, the U.S. House of Representatives voted to drop the national speed limit. This allowed the states to decide their own speed limits.