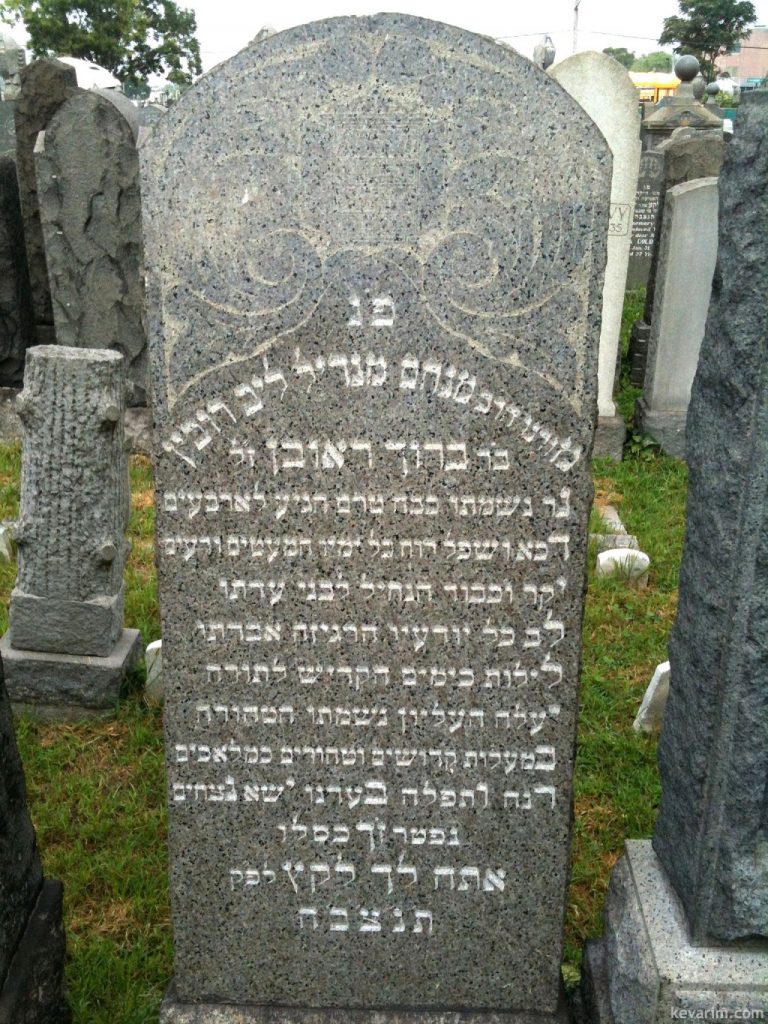 1657/2105 B.C.E., the 40 days and nights of rainfall that covered the face of the earth with water during the Mabul ended today on 27 Kislev (according to Rabi Eliezer).

Harav Menachem Mendel Leib Rubin arrived in America in 1903 from the town of Jakobstadt in southeastern Latvia and settled in the Brownsville section of Brooklyn, where he served as Mara d’Asra of Cong. Agudath Achim Anshei Libowitz, a Lubavitcher kehillah.

He was greatly esteemed by all who knew him and spoken well of by the Yidden of Brownsville. He himself bequeathed yakar v’kavod, glory and honor, as his matzeivah attests, to the people of his community, which seems to indicate that he excelled in treating his mispallelim and other fellow Yidden with dignity, and can mean as well that his being bespoke nobility of character as befits a talmid chacham. Rav Rubin dedicated his days and nights to Torah study; people would come from far and near to listen to his words of Torah and chochmah.

He was a daka ushfal ruach, a subdued, humble individual, as his matzeivah attests, who lived a life fraught with difficulty. Such a person merits Hashem’s special attention, as the Navi says (Yeshayah 57:15): “Ki choh amar ram v’nisa shochein ad v’kadosh shemo marom v’kadosh eshkon v’es daka ushfal ruach l’hachayos ruach shefalim ul’hachayos lev nidka’im — For so says the High and Exalted One, Who dwells forever and Whose Name is Holy: ‘While I dwell on High and in holiness, [still and all] I am with the crushed and humble-spirited, to receive the spirit of the holy ones and to revive the heart of the crushed.’”

Rav Rubin’s accomplishments in Torah and ruchniyus took place, as mentioned before, against a backdrop of a life filled, unfortunately, with hardship. He fell ill three weeks before his untimely petirah on 27 Kislev 5675/1914, and brought to rest at Washington Cemetery in Brooklyn. Rav Rubin was survived by his wife and eight children. Zecher tzaddik livrachah.

In 1791, the Bill of Rights, the first 10 amendments to the U.S. Constitution, went into effect following ratification by Virginia.

In 1938, groundbreaking for the Jefferson Memorial took place in Washington, D.C., with President Franklin D. Roosevelt taking part in the ceremony.

In 1995, European Union leaders meeting in Madrid, Spain, chose “euro” as the name of the new single European currency.

In 2001, the Leaning Tower of Pisa, Italy, was reopened to the public after a $27 million realignment that had dragged on for over a decade.