In 5726/1967, the Six-Day War broke out. The nations of Egypt, Jordan, Iraq and Syria attacked Eretz Yisrael. 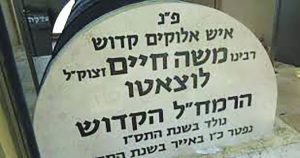 Harav Moshe Chaim Luzzato, known by the acronym of his name, Ramchal, was a philosopher, Kabbalist and ethicist.

The Ramchal was born in Padua, Italy, in 1707/5467. At a very early age, he began to study Kabbalah under the tutelage of Harav Moshe Zacuto, zt”l, one of the foremost mekubalim of his generation. He quickly became known for his vast Torah knowledge and beautiful literary style. It is said that by age 14, he already knew the entire Talmud and Midrash by heart. While still in his twenties, he authored numerous works of Torah scholarship, including Derech Hashem, a systematic exposition of the fundamentals of Judaism.

The Ramchal left his native Italy in 1735/5495 and went into business as a diamond cutter in Amsterdam. His fame eventually caught up with him, and in 1740/ 5500, he published his most famous work, Mesillas Yesharim, which outlines a step-by-step process of attaining spiritual perfection. It has become a classical work of mussar that is still studied today. He also wrote Daas Tevunos and Pis’chei Chochmah.

He is buried on a hillside in Teveria, next to the kever of Rabi Akiva.

The Vilna Gaon declared that the Ramchal had the most profound understanding of Yiddishkeit that any mortal human could attain. He furthermore stated that if Ramchal were alive in his generation, he would go by foot from Vilna to Italy to sit at his feet and learn from him.

In 1830, the first passenger railroad service in the U.S. began service.

In 1844, Samuel F.B. Morse transmitted the message “What hath G-d wrought” from Washington to Baltimore as he formally opened America’s first telegraph line.

In 1937, in a set of rulings, the U.S. Supreme Court upheld the constitutionality of the Social Security Act of 1935.

In 1962, astronaut Scott Carpenter became the second American to orbit the Earth as he flew aboard Aurora 7.