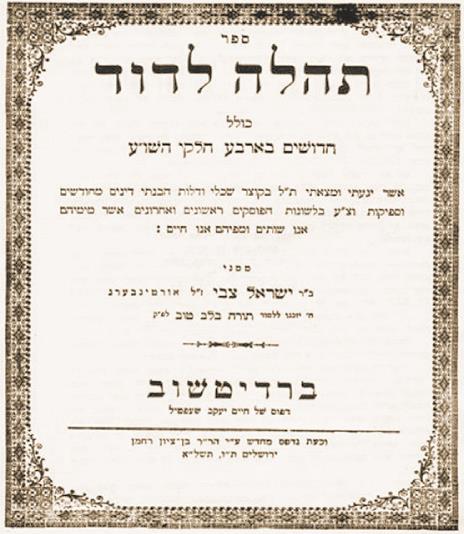 According to Megillas Taanis, the Chashmona’im reinstated the rule of Jewish civil law, replacing the Hellenic secular law, and declared this day a Yom Tov. According to the Gemara (Bava Basra 115), however, this incident took place on 24 Teves.

Harav Dovid Ortinberg was the son of Harav Yisrael Tzvi, a descendant of Harav Zev Wolf of Zhitomir, the Ohr HaMeir, and of the inner group of Chassidim of the Saraf of Strelisk.

After the petirah of the Strelisker Rebbe, Reb Yisrael Tzvi traveled to the court of the Ruzhiner Rebbe. His son Reb Dudia, as he was called, was a devoted Chassid of the Ruzhiner and later of his children.

Even as Rav, Reb Dudia continued to travel to the Ruzhiner Rebbe and, after his petirah, to his son Harav Avraham Yaakov, the Sadigura Rebbe and, later, to the Boyaner Rebbe. He was noted for his utter bittul to his Rebbes, despite his being a Rav, or, as some Chassidim said, because he was a Rav and talmid chacham.

In 1833, Benjamin Harrison, 23rd president of the United States, was born in North Bend, Ohio.

In 1866, President Andrew Johnson formally declared the Civil War over, months after fighting had stopped.

In 1910, a series of forest fires swept through parts of Idaho, Montana and Washington, killing at least 85 people and burning some 3 million acres.

In 1914, German forces occupied Brussels, Belgium, during World War I.

In 1977, the U.S. launched Voyager 2, an unmanned spacecraft carrying a 12-inch copper phonograph record containing greetings in dozens of languages, samples of music and sounds of nature.

In 1994, Benjamin Chavis Jr. was fired as head of the NAACP after a turbulent 16-month tenure.